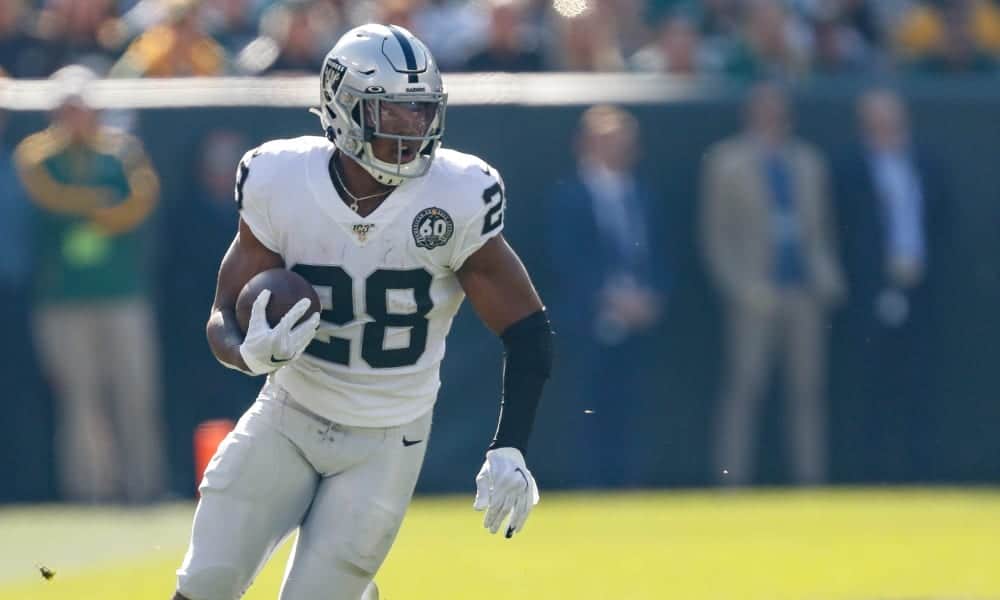 As soon as the season ends in dynasty it’s entirely normal to look ahead to your upcoming rookie draft and start thinking about who you’re going to take with your first-round pick. But before we look ahead, let’s spend a few minutes looking back to see how the top tier running backs in the last rookie class did and see if we can learn anything to help your team this next season with a 2019 rookie running back review.

Back in May, Josh Jacobs was drafted as one of the best rookie running backs in the 2019 class, largely due to his first-round draft capital and potential opportunity for the Oakland Raiders. He was drafted as an immediate fill in at the position and did not disappoint, unlike other early rookie options like N’Keal Harry and Kyler Murray who both underperformed their expectations.

If you wanted a rookie to make an immediate impact for your fantasy team, Jacobs was your guy this year. He is currently a solid RB2 option in fantasy at RB19 in PPR leagues, rushing for 1,150 yards and 7 touchdowns while putting up 191.6 PPR fantasy points in the process. Jacobs was also RB19 in overall OSM score, meaning he did well with what his offense was able to give him. That kind of production is nothing to scoff at and has made many fantasy owners happy with their choice in Jacobs as a whole. Jacobs did have some injuries down the stretch, but none of them should hinder his output for 2020 and beyond. Injuries are somewhat expected for bell-cow running backs in today’s NFL, especially as the season wears on.

All that being said, Jacobs’ current dynasty ADP is still at 16 overall, or early second round in a 12-team league, and it’s not hard to see why. He received a lot of opportunities and did a lot with them, making him a solid choice for your RB1 on most teams. He’s young and still has plenty of youth left, so he’s easily worth that price as well. A good pick with a good future, with no downsides to talk about.

1B to Jacobs’ 1A was Philadelphia Eagles running back Miles Sanders, who was being drafted right alongside Jacobs in most of the 2019 rookie drafts. Sanders was expected to split time with newly acquired teammate Jordan Howard which lowered his ceiling a bit, but anyone who saw Sanders on tape knew he’d take over that backfield eventually. The real question was would head coach Doug Pederson let him?

The answer to that became a resounding yes once Howard went down with an injury in Week 9, allowing Sanders to rack up the stats in his absence. Through 16 weeks, Sanders has 210.6 points and is RB13 in PPR leagues, with 766 yards and 3 touchdowns on the ground with another 510 yards and 3 touchdowns receiving. In terms of OSM, he’s got a lot of room for improvement, however, getting an overall score that puts him at RB38. This just means that he wasn’t as responsible for his output as some others, likely relying on a strong offensive line and gameplan to get his points.

So what does this mean for 2020? Well for starters, look for Howard to move on and find another team this offseason, as it’s unlikely that the Eagles bring him back at his age and with the breakout season Sanders is wrapping up. Pederson has mentioned numerous times that he wants to utilize a committee backfield, so it’s hard to see Sanders being the bell-cow there right away, but whoever they bring in to complement him will likely just be a change of pace and not really eat into Sanders’ production much. Sanders’ current ADP is at 51 overall, or early fifth round, but it is likely to rise once Howard is moved and as more dynasty players start to look back on his numbers from 2019.

The third in the trio of top RBs from the 2019 rookie class is David Montgomery, who was also clearly the third of the three in terms of stats as well. Montgomery and the Chicago Bears had a rocky season, to say the least, and weren’t able to get things moving how head coach Matt Nagy wanted. Quarterback Mitch Trubisky struggled individually as well, giving Montgomery fewer chances to shine as a result. Regardless, Montgomery was the lead back for the team and did well with what he was given in terms of fantasy output as well as on the field production.

Montgomery has 776 yards and 5 touchdowns and a PPR total of 153.1 points through Week 16, putting him at RB38 on the season in terms of fantasy production. This lines up well with his OSM scores as well, who rank him RB32 overall, meaning he had some help to get his numbers, but it’s right in line with what you see as a result. Montgomery did have a few breakout moments this year, and had the single highest OSM score of these three backs, scoring a “very good” 32.3 in Week 9. While the fantasy stats may not show it, Montgomery was a solid RB2 option in multiple weeks and should continue to perform well in the future.

Speaking of which, Montgomery is currently going at 53 overall in mock dynasty startups, just after fellow rookie Miles Sanders. In terms of opportunity and team build, both have similar outlooks and should both be considered viable RB2 options in most dynasty leagues. And, based on the fantasy numbers from 2019, it’s very likely that you could acquire Montgomery for significantly less than what it would cost to trade for Sanders, making him a potential trade target as we head into the 2020 rookie draft.

All three of these backs were drafted with high hopes, and it could be argued that all three delivered. These were the three best rookie running back of 2019, which is exactly how they were drafted. None of them were league winners like rookie running backs of the past (Saquon Barkley, Christian McCaffrey, Ezekiel Elliott), but they all held their value and produced enough to stake their claim as viable running backs in the NFL. Which is more than you can say for other rookies in their class like Darrell Henderson, Justice Hill, and Benny Snell who all saw spot work behind solid RB1 options this year. If you have Jacobs, Sanders, or Montgomery, you’re not upset at your pick and should be looking forward with a smile in your dynasty league.

Hit us up on Twitter @PFNFantasy with what you expect for these three in 2020 and beyond. Also, continue to visit the Pro Football Network for NFL news and in-depth analysis like the #PFNOSM data while also visiting our Fantasy Football section for more coverage.

Andrew Hall is a writer for PFN covering Fantasy Football. You can follow him on Twitter: @AndrewHallFF