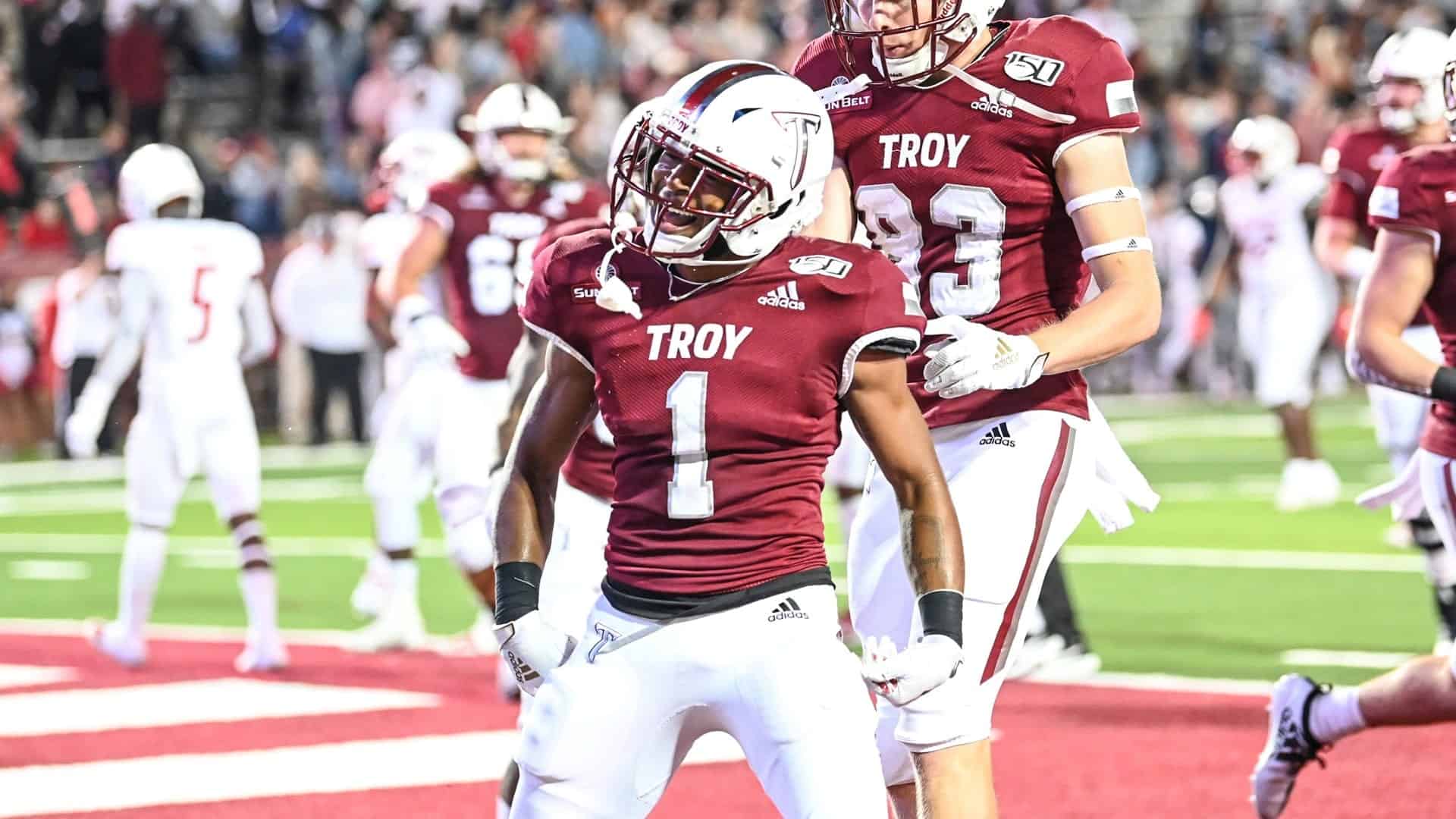 The Sun Belt Conference features a bevy of talented pass-catchers primed to make waves this season. This particular contingent of offensive playmakers comes in varying shapes and sizes, but all possess tantalizing athleticism, game-breaking ability, and undeniable upside. The prospects listed below suddenly find themselves as centerpieces of their respective offenses, and if their previous campaigns are any indication of their potential impact, these Sun Belt wide receivers and tight ends could garner national attention in 2020.

Sun Belt wide receivers and tight ends to watch in 2020

Transitioning from the junior college ranks proved to be seamless for Navarro College alum Kaylon Geiger, who finished second in the Sun Belt in catches (77) and third in receiving yards (873) in 2019.

Geiger, a 5-foot-10, 170-pound dynamo who boasts innate explosiveness and tremendous short-area quickness, earned first-team All-Sun Belt and Sun Belt Conference Newcomer of the Year honors following his awe-inspiring debut. While Geiger sports a slight build, the Fort Worth native provides game-breaking ability and appealing versatility to the Trojans offense, which makes him arguably the conference’s most threatening offensive weapon. After taking the college football world by storm last season, there is a distinct possibility that Geiger eclipses the 1,000-yard mark in 2020.

Arriving at Troy University last season, by way of Hinds Community College, Reggie Todd brought in 38 receptions for 666 receiving yards and five touchdowns for the Trojans. Although the junior college transfer proved to be a key offensive component in his first season, he was every bit as integral on special teams, returning 17 kicks for 465 yards — including a 79-yard touchdown against Georgia State.

In 2020, Todd will pair with Geiger to form perhaps the most formidable receiving tandem in the Sun Belt Conference. The 6-foot-5, 200-pound wide receiver, who is terrific in contested-catch situations and slippery after the catch, has yet to scratch the surface of his talent level. Todd has the requisite size and inherent intangibles that typically warrant NFL consideration, and if he can piece it all together in his final campaign, the one-time Mississippi State recruit will become a household name once again.

Jonathan Adams Jr., who narrowly edged out teammate Kirk Merritt by 45 receiving yards as the Red Wolves’ third receiver, has an opportunity to emerge from the substantial shadows cast by recently-departed wide receivers Omar Bayless and the aforementioned Merritt, and become a primary receiving option in 2020.

Similar to Bayless, Adams — who entered 2019 with just 25 receptions over his first two seasons — experienced a dramatic spike in production, registering 62 catches for 851 yards and five touchdowns. The 6-foot-3, 209-pound Jonesboro native has the athleticism, ball skills, and route running prowess to take his game to the next level, and with an expected uptick in targets, he finds himself in a prime position to enhance his draft stock.

Despite playing in nine games in 2019, as a season-ending knee injury thwarted what many expected to be a prolific follow-up to a productive start to his Mountaineers’ career, Corey Sutton managed to earn second-team All-Sun Belt honors for the second time in as many seasons. Prior to the injury, Sutton totaled 41 receptions for 601 yards and a team-leading seven touchdown catches.

The 6-foot-3, 200-pound wideout made his presence felt regardless of the time lost, producing highlights that included two touchdown receptions in the final nine minutes of play in an upset loss to Georgia Southern, and an 8-catch, 173-yard, three-touchdown performance in a win over Georgia State. Sutton is an explosive pass catcher that can effectively work all three levels of the field and is my preseason pick to lead the Sun Belt in receiving in 2020.

The second half of the Mountaineers’ dynamic receiving duo, Thomas Hennigan enters his senior season having started all 40 games of his collegiate career. Tied for seventh in program history in receiving touchdowns (14) and ninth in catches (135), Hennigan is coming off a stellar junior season in which he accumulated 61 catches for 733 yards and six touchdowns, earning him second-team All-Sun Belt honors.

Lauded for his physicality at the catch-point, ability to manufacture yards after the catch, toughness, and versatility, Hennigan could feasibly eclipse his career-high 2019 totals, with top receiver Corey Sutton returning to the lineup.

Prior to last season’s emergence, Josh Pederson’s production was limited to 24 receptions for 257 yards and two touchdowns in 22 games. In 2019, however, the 6-foot-5, 232-pounder evolved into a prominent offensive weapon, compiling 43 catches for 567 yards and nine touchdowns in 12 games — including a seven-catch, 82-yard, two-touchdown outing against the talent-laden Memphis Tigers.

The son of Philadelphia Eagles head coach Doug Pederson, Josh enters the 2020 campaign as the Sun Belt’s undisputed top-ranked tight end, who possesses the upside and explosive traits that figure to garner significant buzz when the pre-draft process begins.

The 6-foot-4, 245-pound tight end burst onto the scene a season ago, hauling in 32 receptions for 431 yards and five touchdowns, giving him 10 touchdown catches in his first two seasons. The Cambridge native earned third-team All-Sun Belt Conference honors for his efforts, in addition to being named a second-team All-Conference selection by Phil Steele.

Possessing adequate speed, body control, and strong hands, Isaiah Likely enters his junior season with justifiably high expectations and will pair with running back C.J. Marable to give the Chanticleers an enticing offensive outlook in 2020.

Coming off a brilliant sophomore campaign in which he reeled in 70 catches for 757 yards and five touchdowns, Cornelius McCoy already ranks sixth in Panthers history, amassing 105 receptions and 1,252 receiving yards over his first two seasons. The Deerfield Beach native is poised to continue his upward trajectory and become one of the Sun Belt’s breakout stars in 2020. While the 2019 season was two-time All-Sun Belt Conference quarterback Dan Ellington’s last hurrah, McCoy will team with strong-armed redshirt freshman signal-caller Cornelious Brown to form one of the more intriguing duos in the conference.