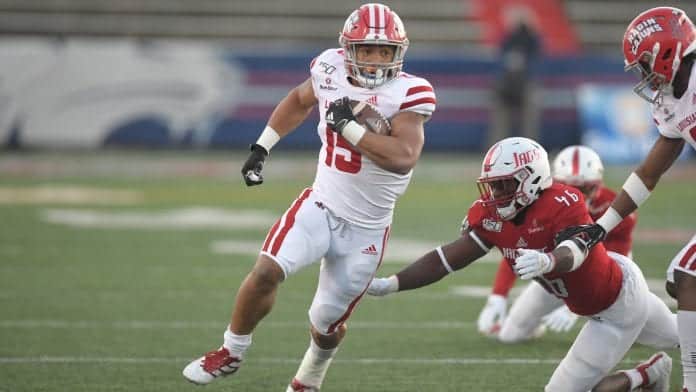 The Sun Belt Conference features an underrated quantity of quality NFL Draft prospects each year, and in 2021, these Sun Belt running backs can bolster that group.

Although the Sun Belt Conference continuously churns out next-level prospects each year, the conference is often overlooked when compared to its more formidable counterparts, so this year figures to be no different. While the 2021 running back class is headlined by Clemson’s Travis Etienne and Oklahoma State’s Chuba Hubbard, the Sun Belt Conference features a myriad of enticing running backs with the talent to become viable draft prospects this season. Whether they have feature-back upside or best fit in a committee is still to be determined, but for now, let’s take a closer look at three running backs poised to become household names in 2020.

The Ragin’ Cajuns have quietly boasted one of the nation’s top running back contingents over the past couple of seasons. The decorated three-man committee recently lost Raymond Calais to the NFL, thrusting Trey Ragas and Elijah Mitchell into the limelight. While Ragas will undoubtedly own a piece of the backfield timeshare in 2020, expect Mitchell to shoulder the lion’s share of the carries.

Last season, Mitchell became just the sixth player in Ragin’ Cajuns history to run for over 1,000 yards in a single-season, rushing for 1,147 yards and 16 touchdowns — including five 100-yard outings.

At 5-foot-11, 217 pounds, Mitchell provides an intriguing blend of power and finesse to the backfield. His innate vision and patience at the line is complemented by his burst and ability to navigate through traffic without losing momentum. The one question that Mitchell must answer for evaluators in 2020, however, is that he has the ability to stay on the field for all three downs and can be an asset as a pass-catcher.

Mitchell is now afforded the platform to show the college football world what he can do with a larger role. The Louisiana native has all the physical tools to prosper, but it will ultimately come down to the finer nuances of the position — pass protection, attention to detail, and consistency — if he wants to separate from his counterparts.

Last season, C.J. Marable finished fifth in the Sun Belt in rushing yards (1,085) and sixth in rushing touchdowns (11), but the Chanticleers’ standout has yet to receive the notoriety he deserves. That figures to change in 2020.

The 5-foot-10, 190-pound running back more than makes up for his diminutive stature with his blistering speed, elusiveness in the open field, and tough running between the tackles. In fact, an underrated aspect to Marable’s game is his physicality as a runner — he has a strong base and does not go down easily.

Marable has also shown marked improvement as a pass-catcher, reeling in 38 receptions for 295 yards and three touchdowns in 2019, and that is an area of his game that should continue to evolve in his final campaign.

Marable is in prime position to surpass his gaudy totals from a season ago. Unlike many backfields across the country, Coastal Carolina doesn’t roster a threatening backup to usurp Marable for carries. Durability will be a big concern for Marable, who is expected to see an uptick in usage. The electric runner best projects as a complementary piece to a committee at the next level, but Marable will be among the more intriguing small school prospects to monitor as we inch closer to the college football season.

Josh Johnson’s winding path to prominence began at Coahoma Community College in 2017, where he finished fifth in the NJCAA in rushing. He then made the jump to Louisiana-Monroe the following season, where he was used sparingly, appearing in nine games and carrying 19 times for 69 yards and a touchdown. The following season, however, Johnson would take the college football world by storm.

Johnson burst onto the scene in 2019, carrying 201 times for 1,298 yards (third-best in the conference) and 11 touchdowns, while adding 13 receptions for 122 yards as a pass-catcher for the Warhawks. He earned second-team All-Sun Belt Conference honors for his breakout performance.

At 5-foot-9, 215 pounds, Johnson possesses plenty of juice through the hole and boasts outstanding contact balance evading would-be tacklers. Though primarily labeled as a power running back, the compact runner has enough speed to turn the corner and breakaway ability to pull away from defenders in the open field. The pass-catching element to Johnson’s game needs refinement to complete what many consider to be a well-rounded game, but I am interested to see what he does for an encore — with expectations significantly higher and a larger workload on the horizon.