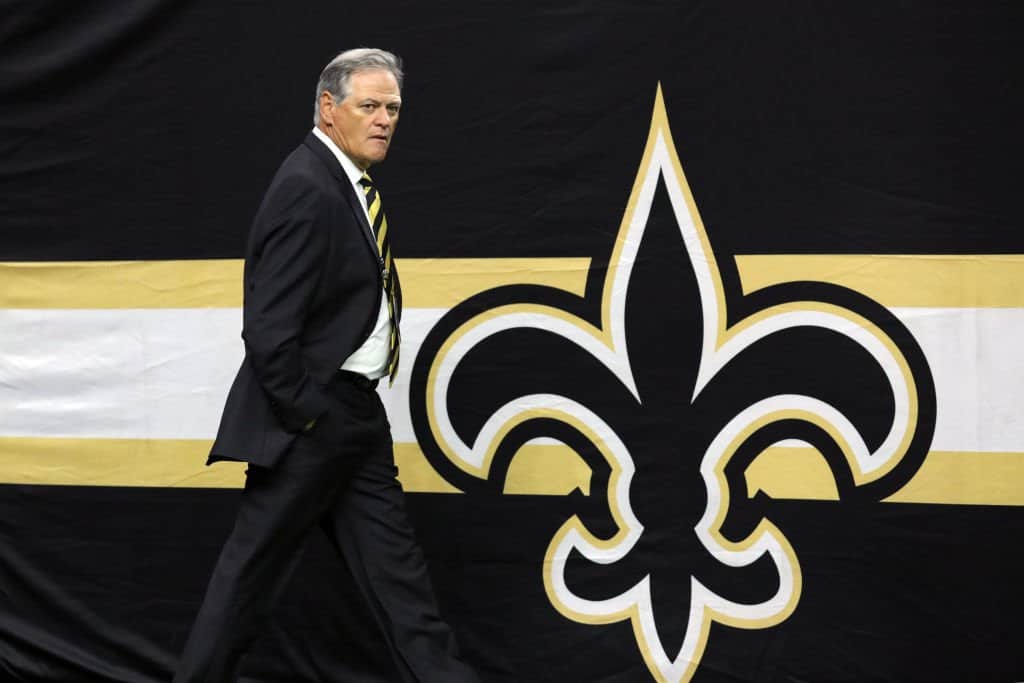 NEW ORLEANS, LA - SEPTEMBER 09: New Orleans Saints General Manager Mickey Loomis looks on before the game between the New Orleans Saints and the Houston Texans on September 9, 2019 at the Mercedes-Benz Superdome in New Orleans, LA. (Photo by Stephen Lew/Icon Sportswire via Getty Images)
What's in this article? Click to show
The Saints are projected to be more than $75 million over the salary cap in 2021
The Saints could extend some players in 2021
The Saints can also clear space through restructures and extensions
How much could the Saints realistically save on their 2021 salary cap?

The New Orleans Saints did not reach the ultimate goal of a Super Bowl in the 2020 NFL season, and now their salary cap situation for 2021 paints a worrying picture. Let’s take a look at the Saints’ salary cap situation and how they may improve the current predicament.

The Saints’ salary cap has been an interesting proposition for a while, but in 2021 it looks set to cause a serious problem. With Drew Brees nearing retirement, the Saints have continued to push the boundaries with their cap in the past few years. However, the situation with the salary cap being set to drop in 2021 has caused serious concerns for the Saints.

The Saints have around 60 players contracted for the 2021 season

This is positive for the Saints to some extent. If the Saints were that far over the projected cap and needed to sign 20 players, they would be in a maelstrom. Currently, the Saints only need to add another eight players. Naturally, if they were to cut players, they will look to replace them. However, replacement players will likely come with a much cheaper price tag.

As it stands, they are in strife with their cap, but they do have some options.

The Saints could extend some players in 2021

The Saints’ 2017 NFL Draft class was one of the best of the season. Six of their seven selections were made in the first three rounds. All six of those players remain on the roster in the 2021 season. Alvin Kamara already signed a five-year contract extension worth $75 million. Marcus Williams, Alex Anzalone, and Trey Hendrickson are all in the final years of their deals.

Meanwhile, the Saints picked up the option year on both Marshon Lattimore and Ryan Ramczyk. Both of them are currently under contract for 2021 but could be candidates for extensions.

We will discuss players that could be cut candidates later, but a spoiler alert is that the offensive line will be featured. Therefore, the Saints may want to keep Ramczyk for the long haul. Ramczyk is currently set to count $11.1 million against the cap in 2021. However, the Saints could reduce that as part of an extension.

Over the Cap calculates that the Saints could save as much as $8.1 million with an extension if they structure it correctly.

With no guaranteed money on his deal, they could cut Ramczyk. Cutting a good offensive lineman in his prime would not be a smart move. Keeping Ramczyk would even offer the possibility of switching him to left tackle this offseason. He played two games at left tackle in his rookie season, playing the remainder of his games at right tackle since.

Lattimore had one of the worst years of his career in 2020, and it raises question marks for the Saints. Cutting Lattimore could save the Saints $10.24 million against the cap. However, Lattimore has a reputation as being a solid option at the position. Therefore, the Saints may not be ready to give up on Lattimore.

An extension could save the Saints around $7.5 million in 2021. Another option would be to explore trading Lattimore. Yet, after allowing seven touchdowns in coverage this season, his value may be significantly lower than the Saints would like.

Taysom Hill is set to count over $16 million against the cap in 2021. The Saints gave Hill a two-year, $21 million contract extension in 2020. Hill got an extended opportunity as the Saints’ QB this season, with mixed results. The Saints managed to keep Hill at around $10 million per year in 2020 because he had not played much QB. Now that Hill has some QB experience under his belt, he will likely ask for more.

The Saints are somewhat backed into a corner here. Cutting Hill would only save $5 million, while an extension could save as much as $8.9 million. The problem for the Saints is that an extension now will likely be costly down the line. Hill has all the leverage at this point and can essentially name his price.

The Saints’ other option would be to trade Hill. While that could save over $12 million in cap space, will any team value Hill highly enough to take on that contract and pay draft picks to acquire him?

The Saints can also clear space through restructures and extensions

The first domino to fall was Drew Brees. Brees has a complex cap situation, and his decision to reduce his 2021 salary to the league minimum was key. However, outside of Brees, the Saints do have options with their 2021 salary cap.

Which contracts could the Saints restructure?

Cameron Jordan is set to count $18.8 million against the Saints cap in 2021. Cutting him would leave $16.9 million in dead money, so it is not really an option. However, a restructure could save as much as $9.6 million in cap space.

It is a similar story for Michael Thomas, who is set to count $18.8 million against the Saints 2021 salary cap. Cutting Thomas would accelerate $4.2 million more onto their cap number in 2021. However, a restructure of his $12.6 million 2021 salary could save as much as $8.86 million for the Saints.

Andrus Peat is another player with a big cap hit in 2021. Cutting Peat would also increase his cap hit. Therefore, a restructure, which could save as much as $6 million, may be an option. Another player on the offensive line that could be considered is Terron Armstead.

On the defensive side, both David Onyemata and Malcolm Jenkins are potential restructure candidates.

Which players could the Saints cut in 2021?

There do appear to be some obvious names on this list. Janoris Jenkins, Emmanuel Sanders, Nick Easton, and Malcom Brown could save a combined $22 million in cap space.

Easton and Brown would only leave $2.5 million in dead money. However, Jenkins and Sanders would leave $13.2 million behind in dead money. Restructuring Sanders and Jenkins would save $8.5 million, compared to $11 million if they were cut.

Another defensive name to watch is Kwon Alexander. His Achilles injury complicates matters, but there is another $10-13 million the Saints could clear by releasing Alexander.

The Saints could also consider cutting Armstead. They would save a little less cap by cutting him, but they would then not have to worry about the two void years at the end of his deal. A restructure would simply move more money back into those void years. Armstead is an interesting decision for the Saints.

How much could the Saints realistically save on their 2021 salary cap?

With these moves, the Saints could save around $88 million in cap space. They could save around $25 million with extensions and potentially more if they trade Lattimore. Restructuring the two offensive linemen, Thomas, and Jordan could save another $31.26 million. That number could rise to around $40 million with a couple more restructures. The Saints could then save another $30 million if they are willing to move on from players.