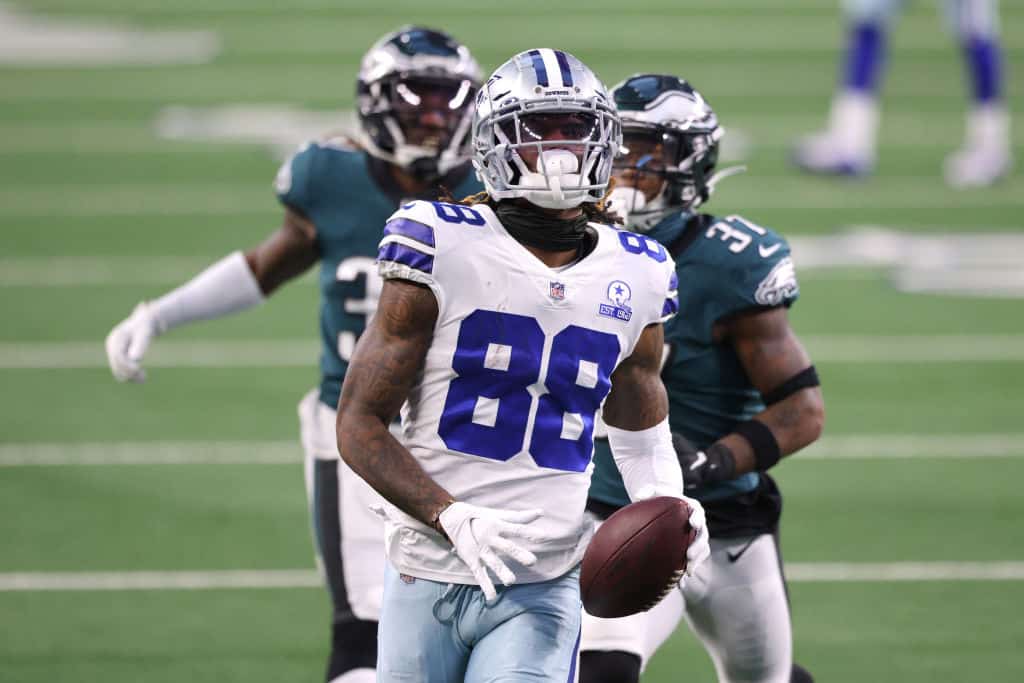 ARLINGTON, TEXAS - DECEMBER 27: CeeDee Lamb #88 of the Dallas Cowboys scores a touchdown in the third quarter against the Philadelphia Eagles at AT&T Stadium on December 27, 2020 in Arlington, Texas. (Photo by Ronald Martinez/Getty Images)
What's in this article? Click to show
The Cowboys project to be around $20 million under the salary cap in 2021
Dallas does not have many options when it comes to releasing players
The Cowboys have a handful of players they can either extend or restructure to create cap space in 2021
Want more NFL news and analysis?

After a disappointing 2020 NFL season, what is the situation with the Dallas Cowboys’ salary cap space heading into 2021? With decisions still to make regarding key franchise pieces, what options do the Cowboys have in the coming months?

As it stands, the Cowboys have just under $177.5 million in commitments to their top 51 highest-paid players with an additional $9.1 million in dead money. Therefore, the Cowboys currently have around $24 million in cap space heading into 2021.

While the Cowboys do not have any cap concerns as it stands, they are missing one vital element. They currently do not have their franchise QB under contract for 2021. If they decide to franchise tag Dak Prescott, he will cost $37 million in 2021. Equally, if they decide to extend him, they may need to open up cap space still.

Therefore, while the Cowboys do not have any imminent worries around their 2021 salary cap space, they need to consider planning for the future.

The number of players the Cowboys could release to open cap space is somewhat limited. In fact, only one player could be released to save over $5 million outright. It seems unlikely that the Cowboys would release Tyron Smith. Doing so would leave them with $8.9 million in dead money for a $5.2 million saving.

Could we see an exodus of mid-priced players from the Cowboys in the coming weeks?

The Cowboys have several players they can release to save around $2-3 million. One such player is cornerback Anthony Brown. Brown played just 19 games over the past two seasons and expects to count $5.75 million against the cap in 2021. Releasing him could see the Cowboys save $2.75 million while leaving themselves with $3 million in dead money.

The Cowboys could save $2.4 million in salary cap space in 2021 by releasing punter Chris Jones. Releasing kicker Greg Zuerlein could see another $2.2 million saved. Zuerlein missed 7 field goals and 3 extra points in 2020.

With cap space being a priority, if the Cowboys want to sign Prescott, they could free up small amounts of space by making decisions on some players reaching the end of their rookie deals. Additionally, they could restructure some of the higher-paid players on their team to free up space.

Four players from the Cowboys’ 2018 NFL Draft class have reached a point where a decision may need to be made this offseason.

Leighton Vander Esch expects to count $3.8 million against the Dallas Cowboys’ salary cap in 2021. All of that money is guaranteed, so releasing him is not an option. However, the Cowboys could save just under $1 million this season by extending him.

Second-round selection Connor Williams is due to count $2.95 million against the cap. The Cowboys could see $2.4 million by releasing him or $1.2 million by extending him. The situation is almost identical with third-round selection Michael Gallup. Gallup has been used sparingly at times and relied on at others. Releasing him could save $2.4 million, while an extension would free up $1.2 million.

The final player on the list is Dalton Schultz. Set to count $2.3 million against the Cowboys’ 2021 salary cap, they could save $2.2 million by releasing him. An extension could save a little bit over $1 million.

The Cowboys’ best way to open up a bulk of salary cap space in 2021 is with restructures. Restructuring Amari Cooper’s deal could save up to $14.3 million. Meanwhile, restructures for DeMarcus Lawrence, Zack Martin, and Tyron Smith could save $12 million, $7.4 million, and $7.1 million, respectively.

The controversial potential restructure would be Ezekiel Elliott. After his struggles in 2020, would the Cowboys be willing to push more money later into Elliott’s expensive contract? If they are, they could save just under $6.9 million in cap space this season.

Two other names to watch out for as potential restructures to save the Cowboys salary cap space in 2021 are La’el Collins and Jaylon Smith.