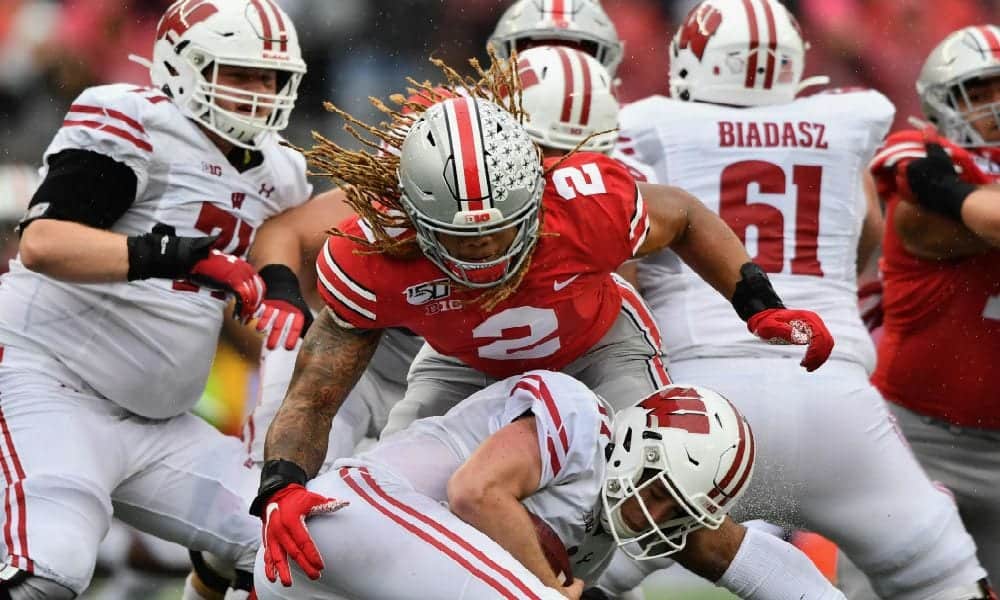 Every week, I open up the mailbag for anyone to send me their questions on the current college football season, the NFL, or the 2020 NFL Draft. This week, the CFB Week 14 mailbag includes questions on Chase Young’s extraordinary season, Jordan Love’s decision on whether to enter the 2020 NFL Draft, rumors on potential head coaching changes in college football, and much more.

Chase Young has been getting a ton of buzz recently, but my concern is the caliber of opposing offensive tackles he has faced this year. How has Young performed this season against draftable offensive tackles? Also, is Young more than a pash-rusher? Can he defend the run well enough to be considered an elite all-around EDGE player?

I think Young is an elite edge rusher but your criticism about his ability to defend the run is fair and something I agree with. Then again, he is a young guy and his play strength will only improve as he physically matures.

As far as the level of competition, while it’s a bummer Iowa was not on the Ohio State schedule this season, Young has been so dominant I don’t know of anyone who is concerned about that.

Jordan Love’s season has not gone as many as hoped. Is his disappointing season impacting his draft stock? And is there any reason to think that Love may decide to not enter the 2020 NFL Draft?

From what I’m hearing at this point in time, it would be a major surprise if Jordan Love returns to Utah State for another year. Rumors are rampant that he’s already chosen representation for when he makes his announcement.

That could change, but I will tell you this – the injury to Tua Tagovailoa has a lot of players rethinking their options and those who are undecided are leaning towards entering the 2020 NFL Draft.

Ironically, Love’s 2019 college football season parallels what Josh Allen suffered through as a junior at Wyoming.

Tony, are there any surprise firings fans should keep an eye out for, whether that be in college football or the NFL?

I spoke about the situation surrounding Chip Kelly at UCLA during this week’s podcast. It’s sort of complex, but something I could see taking place.

Brian Kelly may be a surprise divorce from Notre Dame. The Fighting Irish win 10 games a year, but they are out of the national championship hunt before November, and that’s unacceptable at Notre Dame.

Is Mike McCarthy a possible candidate for head-coaching openings in 2020 and which coordinators are the hottest names that are going to be considered for head coaches?

McCarthy will get consideration, though I don’t think he’s a shoo-in nor do I think he’s the best candidate.

After McCarthy, it’s a thin group. The hot names right now are Don Martindale of the Baltimore Ravens and Matt Eberflus of the Indianapolis Colts. Josh McDaniels of New England will also be in the conversation for a head coaching job, as he usually is.

Which player did you have graded higher – LSU safety Grant Delpit or Jamal Adams? Could Delpit end up drafted in the top-5 and is his skill-set capable of making an Adams-like impact from the get-go?

I’m a Delpit guy because I believe at equal points in their careers, juniors at LSU, Delpit has better ball skills than Adams had and is better in coverage. That said, Adams has developed into a complete game impacting safety.

I’ve been critical the way the Jets don’t develop their players, but Adams has shown steady development on the field and has been dominant this year. Those are big shoes Delpit must fill for comparative purposes.

Hamilcar Rashed Jr. is a player I am sure more people will get familiar with as the draft process continues. He is making quite the name for himself. But looking ahead, what are the chances he could be seen as someone who ends up playing both inside and outside? Also, could he lock in a spot on at least day two over the next few months?

Personally, I believe Rashed Jr. is best as an outside linebacker in a 3-4 once he fills out his skinny frame. I know of some area scouts who believe he’s best as a 4-3 weakside linebacker, so people see a lot of versatility in his game.

As far as locking up a day two grade over the next few months – except for the top tier of players, that’s tough to predict or guarantee and it’s even more difficult with underclassmen.

I reported in last week’s podcast that Hamilcar will go through the process and get a grade from the advisory committee and other opinions to see where he stands. If he doesn’t get a top 60 grade, he’ leaning towards returning to school.

I could see him landing in the third round assuming he works out well and shows he has some meat on his bones during combine weigh-ins. This, of course, assumes he enters the draft.