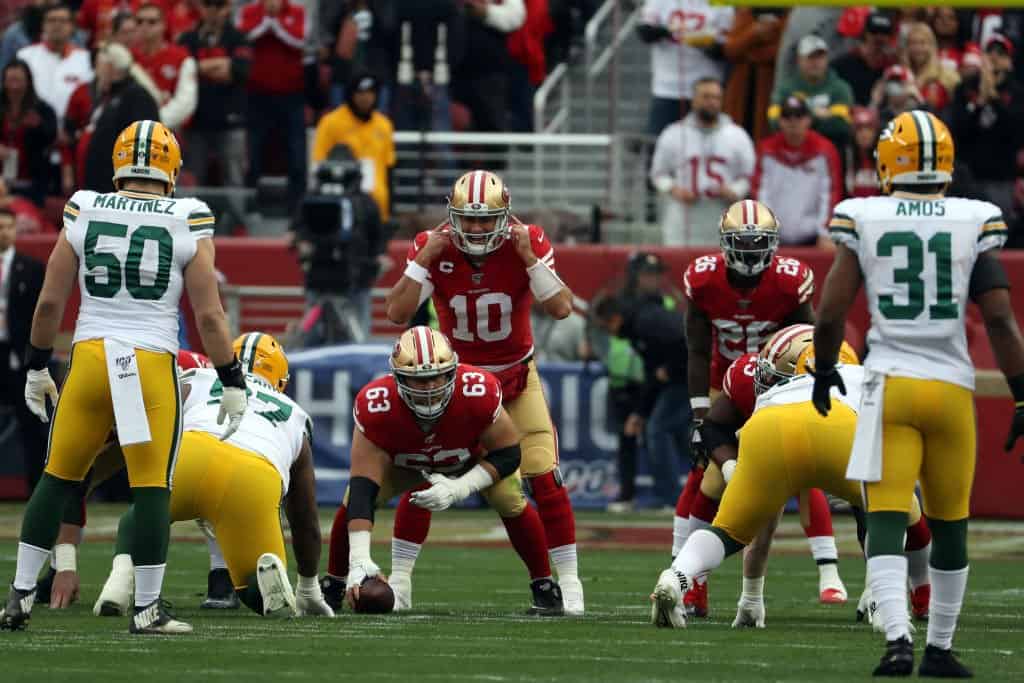 PFN’s Senior NFL Analyst Matt Williamson (Former NFL Scout and ESPN Analyst) released his Week 9 Power Rankings following the games on Monday Night Football in Week 8. A strong defense and a surprising offensive spike provided by Nick Mullens in Week 8 have the 49ers in the middle of the pack despite injuries to Jimmy Garoppolo and George Kittle. Meanwhile, the Packers sit top 10 after a poor defensive performance in their loss to the Minnesota Vikings.

Be sure also to check out Mike Tanier’s NFL Week 8 Recap. This week, Mike breaks down the complicated and tight NFC playoff race and explains why there were some wild swings in point spreads. You definitely don’t want to miss Tanier’s studs and duds from Week 8.

Who plays on Thursday Night Football tonight in Week 9?

The weather should be good for this game as the temperature is expected to be in the high-60s under sunny skies at kickoff. As the sun dips below the horizon, expect mostly clear skies with the temperature falling to near 60 degrees. Winds will be light in the game, coming from the northwest around six miles an hour with the gusts topping out around eight miles per hour. There is no rain in the forecast.

NFL Game Tonight | What to expect from Packers vs. 49ers?

The 2020 season hasn’t been kind to the 49ers. They’ve dealt with injury after injury, and almost all of them to major parts of their team. Heading into Thursday’s game, the 49ers will be without Jimmy Garoppolo, George Kittle, Deebo Samuel, Raheem Mostert, Jeff Wilson, Weston Richburg, Ben Garland, Nick Bose, Ziggy Ansah, Dee Ford, Solomon Thomas, and Richard Sherman. That’s an extensive list, and all of them are either starters or backups to someone else on the list. To say injuries have decimated the 49ers is a massive understatement.

Now, added to that long list of injures, Brandon Aiyuk, Kendrick Bourne, and Trent Williams will also miss the game due to contact-tracing.

However, the 49ers have persevered this season. They currently sit 4-4, which puts them just a single game behind the seventh seed. Kyle Shanahan has done a phenomenal job keeping this team competitive week in and week out. Robert Saleh also deserves a ton of credit for coaching an above-average 49ers defense without their major stars.

Despite all of their injuries, the 49ers have been solid on defense, ranking sixth in total yards allowed, fourth against the pass, 10th against the run, and 10th in points allowed, giving up just 21.6 points per game.

Related | With 49ers QB Jimmy Garoppolo out, should you start Nick Mullens in fantasy?

Heading into their matchup with the Packers, it’s all going to be about Nick Mullens. The Southern Miss product is going to be tasked with replacing Garoppolo yet again. If the 49ers are going to have any chance of winning this game, then they’ll need Mullens to play as he did in Week 8.

In his brief stint replacing the injured Garoppolo, Mullens was 18/25 for 238 yards and two touchdowns. Mullens put up those numbers in just one-quarter of play. If he can recapture that magic against Green Bay, the 49ers have a shot.

On the other side, the Packers are the clear favorites heading into Thursday’s game. Aaron Rodger’s squad is one of the best in NFC, sitting at 5-2. They have one of the best offenses in the NFL and should be able to move the ball against the 49ers, just as the Seahawks did in Week 8.

Unfortunately for Green Bay, they will not be getting breakout WR Allen Lazard back in this game. There was hope he could make his return after suffering a core muscle injury early in the season, but it won’t be against the 49ers.

The big question is the Packers defense. One of the best units in the NFL in 2019, they’ve been one of the worst in 2020. They just put up a season-worst performance against the Vikings. Dalvin Cook dominated the game, putting up 226 yards from scrimmage and four touchdowns. The 49ers may not have a potent offense due to the numerous injuries, but they still rank sixth in rush offense DVOA. If Mullens keeps the momentum from Week 8 and the 49ers pair that with a strong running game, we could have a game on our hands.

Look for the Packers to win Thursday night’s game by a larger margin than the final score indicates. They’re among the NFC’s elite, and they shouldn’t have much issue against a 49ers team that’s won games against opponents with a combined record of 8-25.