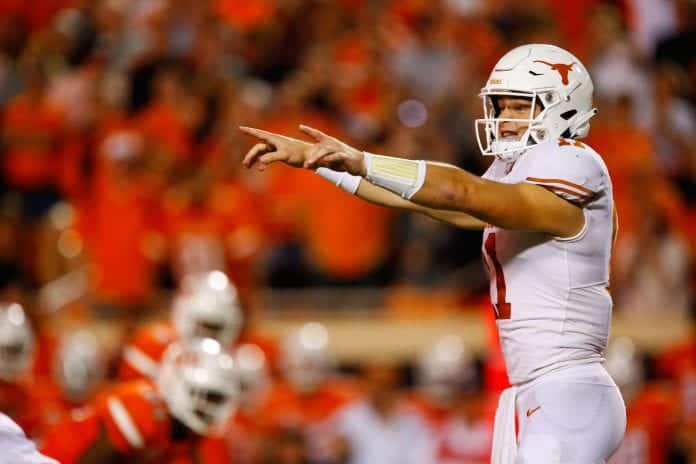 He's accounted for over 10,000 total yards of offense in his career, but heading into his final season, Texas QB and draft prospect Sam Ehlinger still has more to prove.

The 2021 draft class features a diverse batch of quarterback prospects. Trevor Lawrence and Justin Fields sit atop the signal-caller hierarchy, while Brock Purdy, Jamie Newman, and Trey Lance could all hear their names called by the conclusion of opening night. As front-loaded as this class may appear at the position, the next tier offers a bevy of upside-laden talents. Among the most intriguing second-day draft group is Texas quarterback Sam Ehlinger. Ehlinger, who decided to return to school for his final season, could take his game to new heights under new play-caller Mike Yurcich, who most recently served as Ohio State’s passing game coordinator and quarterbacks coach.

A two-time all-district quarterback and 2015 APSE Texas Player of the Year at Westlake High School (Westlake, Texas), Sam Ehlinger opted to remain close to home and continue his football career at the University of Texas.

Unlike most first-year students at his position across the country, Ehlinger managed to escape the dreaded redshirt designation and made a significant contribution for the Longhorns. Appearing in nine games (six starts), Ehlinger completed 158 of his 275 passing attempts for 1,915 yards, 11 touchdowns, and seven interceptions. Establishing himself as a dual-threat player, the Texas native added 385 yards and two touchdowns on the ground.

The 6-foot-3, 230-pound gunslinger found himself in the spotlight earlier than expected — starting games against some of the most explosive offenses at the collegiate level — but perhaps his most exceptional performance was in an early-season road loss against fourth-ranked USC. While the Trojans escaped with a three-point victory in double-overtime, it was Ehlinger’s 298-yard, two-touchdown outing that kept the Longhorns in the game.

Entering the 2018 season as the undisputed starting signal-caller, Ehlinger followed up a respectable debut season with a sophomore campaign that ultimately catapulted the young quarterback to college football relevance.

Starting all 14 games for the Longhorns, Ehlinger completed 275 of 425 pass attempts for 3,292 passing yards, 25 touchdowns, and five interceptions, while his 16 rushing touchdowns were the most by a quarterback in program history. Ehlinger’s 41 combined touchdowns were second only to Longhorn legend Colt McCoy — who accumulated 45 in 2008.

Widely regarded as a rising star among the collegiate ranks after bursting onto the scene as a sophomore, Ehlinger faced heightened expectations entering the 2019 season. With the formidable receiving tandem of Devin Duvernay and Collin Johnson at his disposal, the newly-appointed team captain was poised to cement himself among the nation’s top signal-callers.

Starting all 13 games, Ehlinger completed 296 of 454 passing attempts for 3,663 yards, 32 touchdowns, and ten interceptions. Due to a relatively modest rushing attack, Ehlinger finished second on the team with 663 yards and seven touchdowns.

As he enters his final season, there are few signal-callers as polarizing as Sam Ehlinger in college football.

While he has accounted for a combined 10,396 yards of offensive production over three seasons, it is fair to speculate how Ehlinger’s game will translate to the next level. His lack of arm strength and accuracy deficiencies limit what the Longhorns can do offensively — though his short and intermediate timing routes effectively move the chains. Ehlinger must prove he can adequately threaten all three levels of the field to ensure sustained success at the next level.

The Texas offense is largely predicated on the receiver’s ability to manufacture yards after the catch, so it’s paramount that Ehlinger places an added emphasis on scanning the field and connecting on deeper routes at a higher frequency.

A third or fourth-round pick on talent alone, draft prospect Sam Ehlinger possesses enough physical traits to suggest he could be in line for a long professional career. If Ehlinger can develop a more refined overall game to complement his innate athleticism, instincts, and playmaking ability, expect to see his draft stock soar in the coming months.