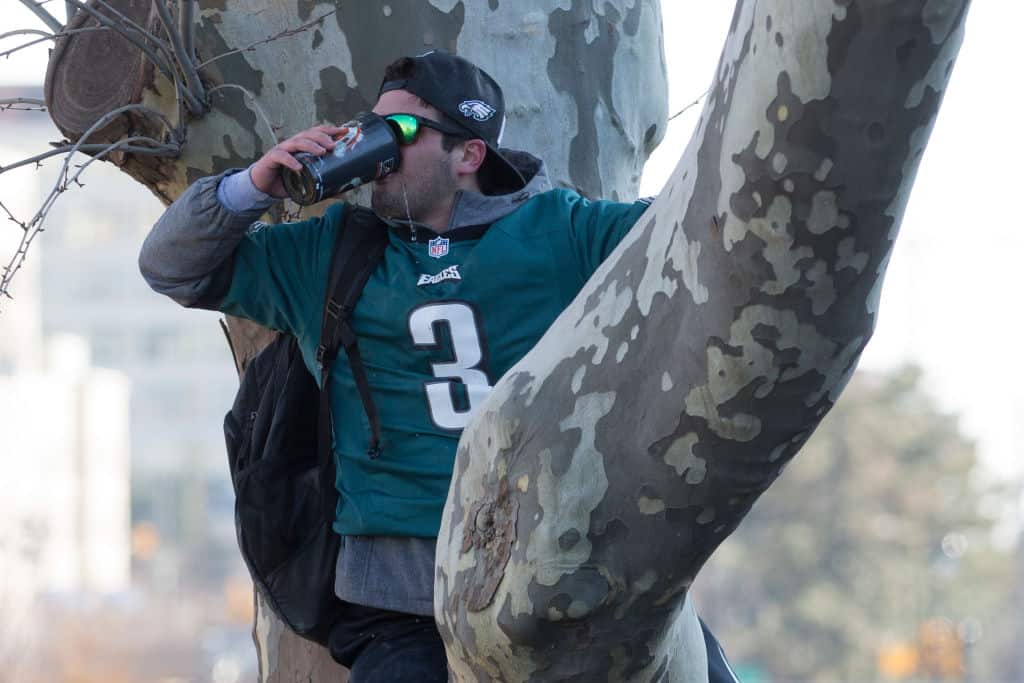 So, your NFL team didn’t make it, or maybe you don’t like Tom Brady and need a way to get through Super Bowl LV? If that sounds familiar, I might have a few Super Bowl drinking games to help get you through the night in one piece. How you feel the next morning is not a guarantee, and as always, drink responsibly.

What kind of drinking games can you play during the Super Bowl?

More like, what game can you not play during the Super Bowl? Honestly, life is hard enough and drives us to drink. You don’t need to give me an excuse to do it. Yet, if you tell me that it is at least less frowned upon, then sign me up to take advantage of this glorious intoxicated loophole of frivolity and bacchanalia.

Even if we are not at the usual gatherings with friends and family, it doesn’t mean we can’t have some fun anyway. After all, drinking is a vital part of many Super Bowl celebrations.

Let’s start things off nice and easy and do a Touchdown Cup. If you don’t want to play the word game, finish your drink anytime there is a touchdown. If you prefer, take a shot when it happens. Touchdowns are typically spaced out when they happen. Therefore, you shouldn’t have to go back-to-back too quickly.

We all know how frustrating it is when referees call dumb penalties, and we say it will drive us to drink. Guess what? This time it actually will. For this game, base it on yardage. Any penalty between five and 15 yards is a sip. Anything beyond 15 yards, chug that drink in your hand.

You can also base this around commercials. Anytime you see another alcohol commercial or a car commercial, take a drink. See the beer commercial of the one you have in your hand? Finish your drink.

These can be as simple or as complex as you want. It all comes down to how well you think you can remember the rules once the fourth quarter rolls around. I’d recommend having these written down on a whiteboard or something and have it handy so you don’t forget.

Pick and choose some of your favorites from this and have some fun. I only hope you already called off for Monday. Feel free to add some based on events like a punt, first downs, turnovers, or incomplete passes.

Playing Super Bowl Squares can be a drinking game as well

Instead of words or events, turn the score into a game. You can play this with friends and family. They don’t even have to be there. Given current circumstances, get together over a Zoom or Hangouts and play together.

Just like regular Super Bowl squares, anytime the score lands on one of your numbers, take a drink. If the quarter ends on your square, finish whatever you have in your hand. One thing is certain, playing any of these will require you to have plenty of beer stockpiled as if it was back in March and it was toilet paper.

How much beer is consumed on Super Bowl Sunday?

If there is one thing Americans are good at, it is football and drinking beer. During Super Bowl 55, that will be on full display.

According to several articles, Americans will consume 325.5 million gallons of beer on Super Bowl Sunday. If that is the case, that would mean, of the 330 million Americans (US Census), they would each drink on average .98 gallons of beer each. That number, however, would be including everyone from infants to the elderly.

That would mean each and every person is downing about 10 12-ounce beers on Sunday. We must have some massive overachievers carrying the rest of the population.