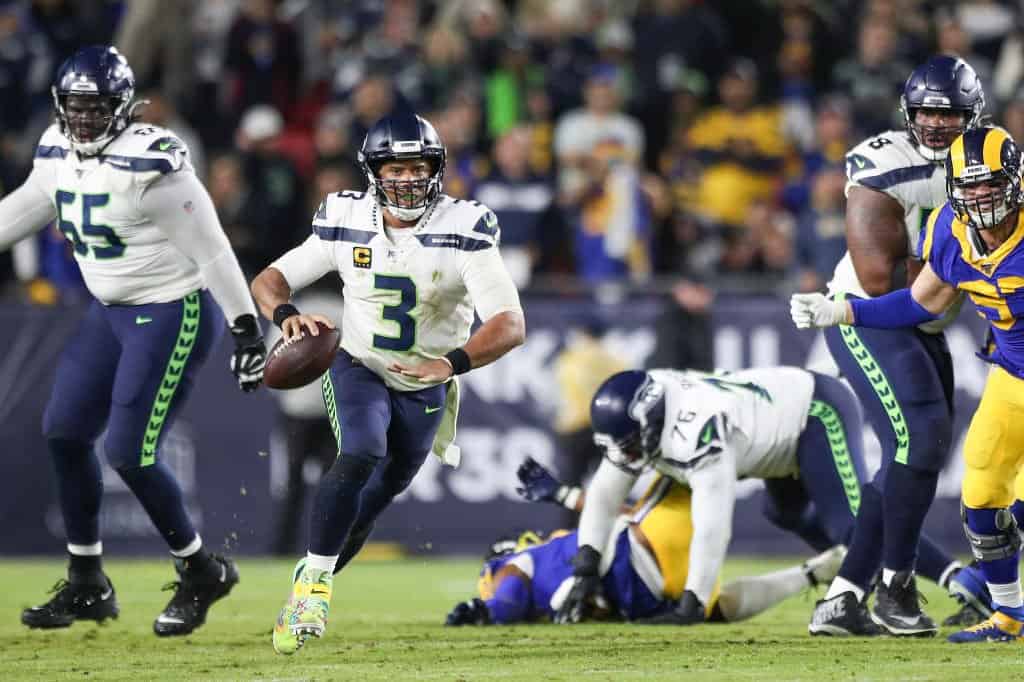 LOS ANGELES, CALIFORNIA - DECEMBER 08: Quarterback Russell Wilson #3 of the Seattle Seahawks runs the ball in the fourth quarter against the Los Angeles Rams at Los Angeles Memorial Coliseum on December 08, 2019 in Los Angeles, California. (Photo by Meg Oliphant/Getty Images)
What's in this article? Click to show
Russell Wilson landing spots include Cowboys, Saints, Bears, and Raiders
What would it cost to acquire Russell Wilson in a trade?
Want more NFL news and analysis?

Seattle Seahawks QB Russell Wilson has sent the rumor mill into overdrive. Wilson has stated that the team needs to improve their offensive line, and his frustration appears to be growing with the lack of concern for his protection. Since entering the NFL in 2012, he’s regularly been among the most sacked QBs and was taken down more than anybody in 2020. What are the top Russell Wilson landing spots?

It’s important to note that his agent, Mark Rodgers, told Adam Schefter that Wilson hasn’t demanded a trade. He did say that if Wilson did leave, the only teams he would consider joining are the Dallas Cowboys, Las Vegas Raiders, New Orleans Saints, and Chicago Bears.

This is interesting as Wilson is one of the few players in the NFL with a no-trade clause. If the Seahawks accept a trade offer from a team that Wilson doesn’t want to play for, he can veto the deal.

The Bears have been struggling at quarterback for a long time. Jay Cutler had some bright patches but was largely disappointing. The team then had the third overall pick in the 2017 NFL Draft. They traded up to No. 2 to select Mitchell Trubisky.

Since that point, they’ve been haunted by the memory. It’s been impossible to mention Trubisky without referencing that they took him over Patrick Mahomes and Deshaun Watson, two of the league’s best QBs. Trading for Seahawks QB Russell Wilson would be expensive. However, if he came in and turned the Bears from a middling team with a good defense into Super Bowl contenders, fans would quickly move on from past mistakes.

As far as transitions go, you couldn’t get much better than Drew Brees to Russell Wilson. Brees hasn’t officially announced his retirement yet, but the Saints need to think about the future. Sean Payton has publicly stated that he believes Taysom Hill has the ability to be a franchise quarterback. Additionally, he also would like to bring Jameis Winston back.

Those are easy statements to make when Russell Wilson isn’t available, though. Payton will know that the current Seahawks QB can do things that none of the quarterbacks on the 2020 Saints roster (including Brees) are capable of. The Saints’ salary cap situation isn’t good now. They would need to clear even more space before making a move for Wilson. Still, if they can acquire a top-five QB, they could be Super Bowl favorites.

Derek Carr is far from the Raiders’ biggest issue, but he doesn’t look as if he’s the solution, either. Russell Wilson has experience of elevating flawed teams and finding a way to make the playoffs. Head coach Jon Gruden was a huge fan of Wilson when he was drafted, and his opinion of him should only have improved.

The Raiders, now based in Las Vegas, will be hoping to welcome fans to their new stadium for the first time. Nothing would draw interest quite like the trade for a superstar QB.

The Cowboys and their quarterback, Dak Prescott, appear to have been at a contract stalemate for a while now. Prescott played 2020 under the franchise tag before an ankle injury caused a premature end to his season. Owner and general manager Jerry Jones is running out of time to get Prescott signed to a long-term extension.

The Cowboys may need to franchise Dak Prescott again to prevent him from entering free agency. Given the team’s apparent hesitance to hand out a big contract, giving up premium draft capital for an older QB who could be looking for a new deal seems unlikely. However, the Cowboys love to make a splash.

What would it cost to acquire Russell Wilson in a trade?

NFL Network’s Michael Silver reported that the belief around the league is that it would take at least three first-round picks from any team looking to trade for the Seahawks’ QB. All of the teams mentioned as potential Russell Wilson landing spots have the draft picks to make the trade. Yet, it’s unclear how willing they would be to pull the trigger.

The Seahawks traded away their first-round picks for 2021 and 2022 and more to land safety Jamal Adams from the New York Jets. Getting premium assets would appeal to any team. Still, it’s up to general manager John Schneider to decide if any deal is worth losing their franchise quarterback for.