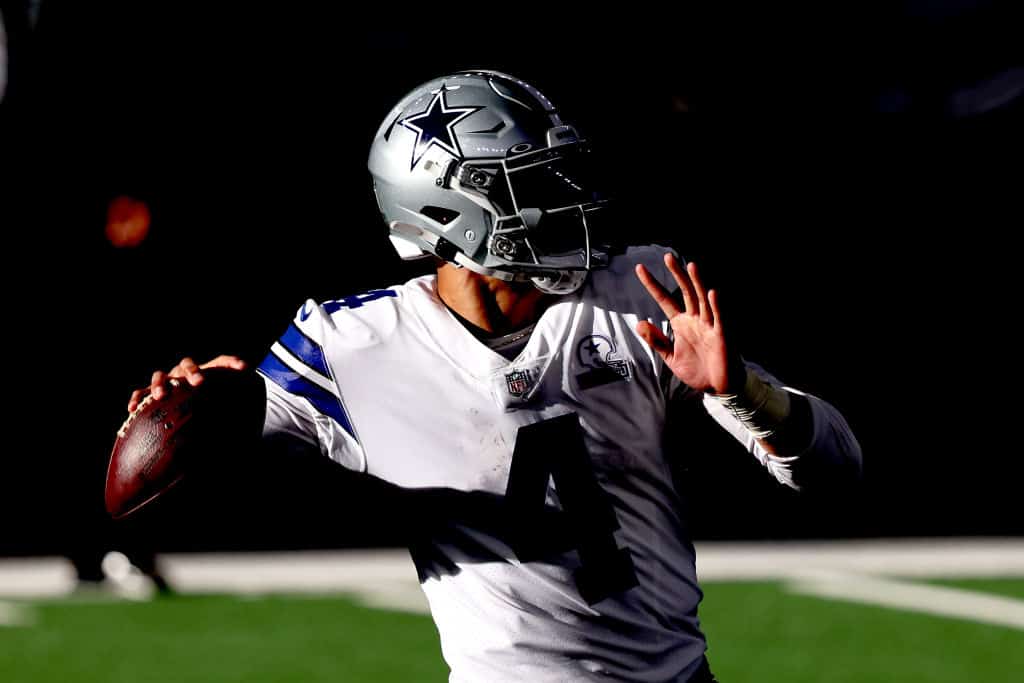 (Photo by Tom Pennington/Getty Images)
What's in this article? Click to show
Dak Prescott’s 2019 season marked him as an elite quarterback
Prescott was excellent before his injury in 2020
Dallas might have missed their chance with Dak Prescott
Want more NFL news and analysis?

The Dallas Cowboys have gotten themselves into a tricky situation in the NFL. After failing to reach a long-term deal with quarterback Dak Prescott last offseason, the Cowboys need to decide if they will franchise tag him for the second consecutive season. Last season’s injury does complicate matters, but Prescott’s stellar statistics over the last few seasons indicate that the team should do whatever they can to keep him in Dallas for the foreseeable future.

Dak Prescott’s 2019 season marked him as an elite quarterback

Before the 2019 season, discussions of whether Prescott deserved a long-term extension might have seemed far-fetched. However, that season catapulted Prescott’s status from that of an above-average quarterback to ranking alongside the best quarterbacks in the NFL.

During the regular season, he threw for a staggering 4,902 yards and 30 touchdowns. Both of those numbers were career bests by significant margins. He also threw just 11 interceptions. Those statistics alone are impressive, but Prescott also performed well on other metrics. The Offensive Value Metric (OVM) gave him a grade of 29.33, the fifth-highest mark earned by any quarterback that season.

The OVM is a grading system created by the (Bx) Movement. Its design is to measure players based on how much they contribute to their offense’s success, rather than just on their box scores. Prescott’s high grade on the metric indicates that he wasn’t just incredibly successful statistically. He also gained those statistics in a highly efficient manner.

Despite Prescott’s success, negotiations with the Cowboys for an extension fell through. Dallas was ultimately forced to use their franchise tag on Dak Prescott. Perhaps they hoped that doing so would give them more time to work out a long-term deal with the quarterback. Instead, the decision only made things more complicated.

Prescott was excellent before his injury in 2020

Unfortunately for Prescott and the Cowboys, any plans for an extension in 2020 were derailed. Prescott suffered an ankle injury that ended the quarterback’s season after just five games. Normally, a season-ending injury might force a team to reconsider signing that player to a long-term deal.

However, the numbers Prescott was putting up before his injury are truly staggering. In those five games, he was averaging a ludicrous 371.2 passing yards per game. He was on pace for about 5,939 yards by the end of the season. That would break the current NFL record by more than 450 yards. 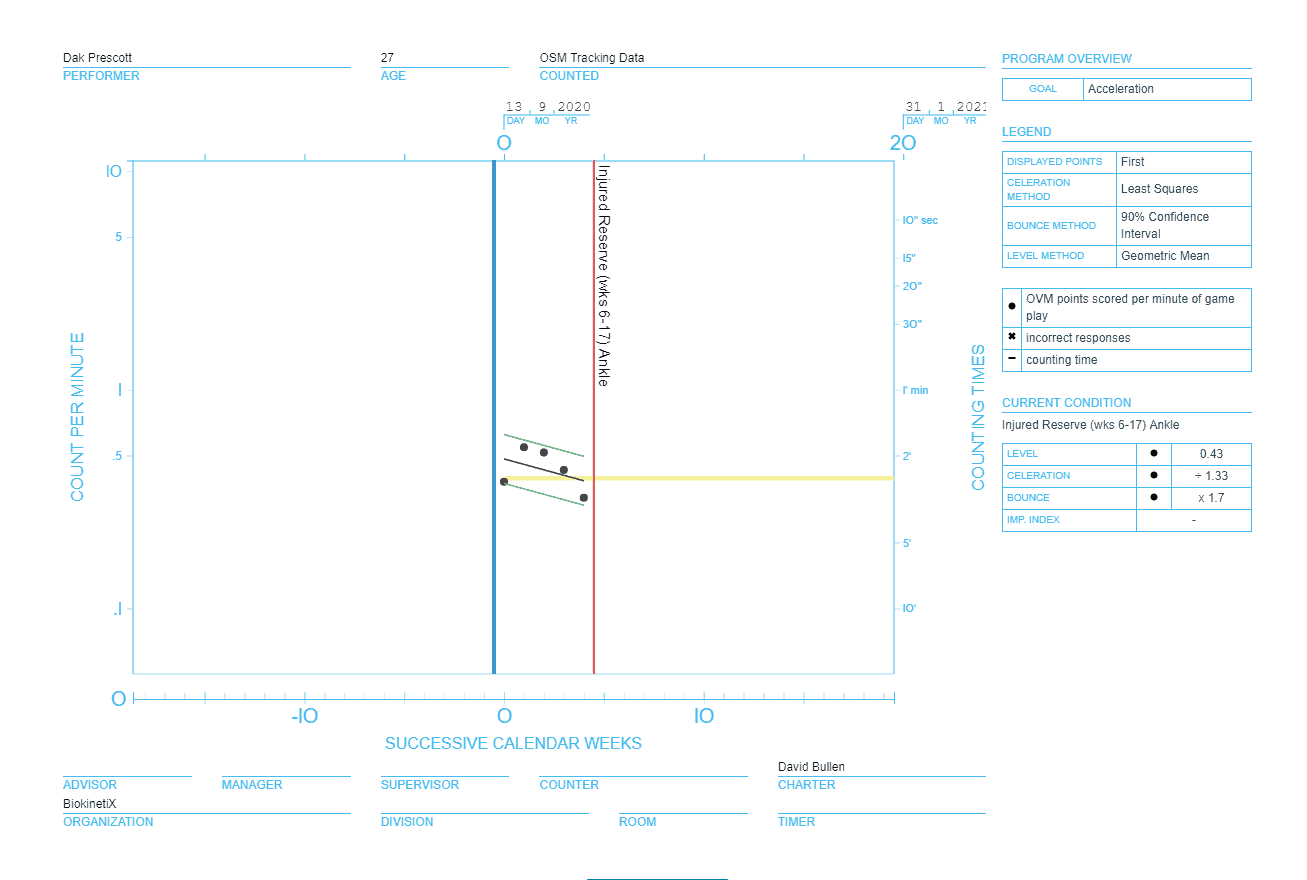 We can’t say for certain how the rest of Prescott’s year would have gone without the injury. However, the statistics imply that he was going to have a season that was as good, if not better, than his breakout 2020 performance.

It isn’t difficult to explain why Prescott’s OVM grade was so high during the five games he played in 2020. He ranked well above the league average on many of the metrics involved in calculating a quarterback’s grade.

Prescott threw the ball 7.9 yards through the air across all of his passes, which was somewhat mediocre. However, he maintained a relatively high average of 6.8 yards downfield on his completions, the 10th-farthest among all qualifying quarterbacks. In other words, while he didn’t throw the ball notably far downfield, he had a remarkably high success rate on those passes.

Prescott’s best metric, however, is his completion percentage. He completed 68% of his passes, which ranked eighth among all qualifying quarterbacks. On top of that, his percentage was 2.7% higher than expected according to the NFL’s advanced metrics, a difference that ranked tenth.

Dallas might have missed their chance with Dak Prescott

The statistics clearly show that Prescott has been a top 10 quarterback in the NFL for the last two seasons. With a player of Prescott’s caliber on the roster, the Cowboys should not franchise tag him. They should sign him to a real contract before he leaves for greener pastures.

Hopefully for Dallas, they haven’t damaged their relationship with Prescott beyond repair, and they can work out a deal. The Cowboys could franchise tag Dak Prescott again and try to stall for yet another season. In truth, though, this is an issue that should have been settled long before this offseason.