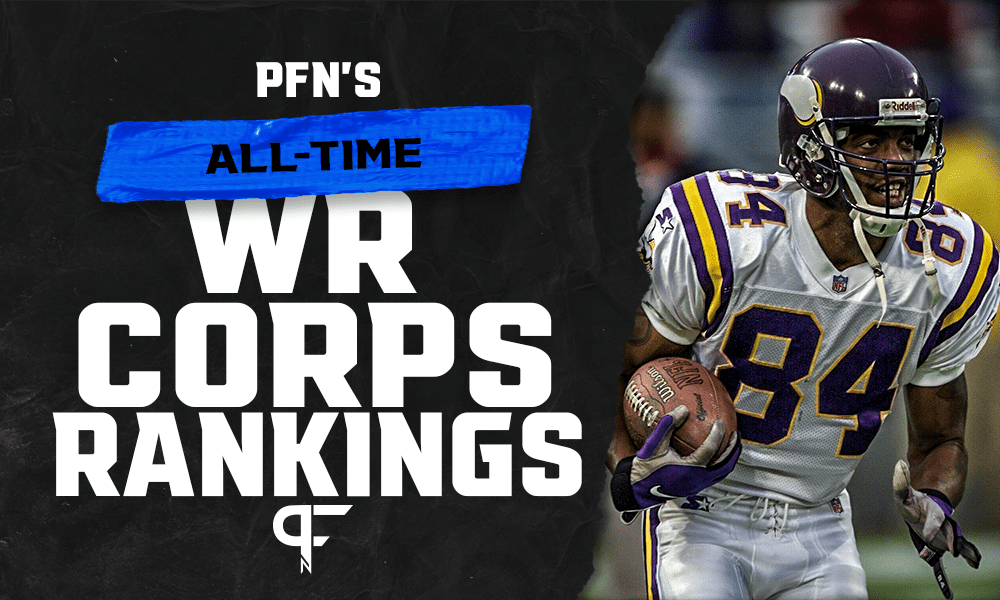 Ranking the best NFL receiving corps of all time is a difficult undertaking. So many of the best groups ever involve a TE — such as Kellen Winslow, for instance. Or, in a modern sense, Travis Kelce. This list, however, ranks just wide receivers.

Before we begin, I’d like to apologize to the Boomers. Unfortunately, the oldest group here was only 1984. As much as I wanted to talk about the 1950 Saint Louis Rams and Elroy “Crazylegs” Hirsch, they just couldn’t make the cut.

First, I’d like to acknowledge the 2006 Cincinnati Bengals. They just missed out on making the list at 11 and were edged out by the 2002 Pittsburgh Steelers. Nevertheless, both Chad Johnson and T.J. Houshmandzadeh went over the 1,000-yard mark, and Chris Henry pitched in with 605 yards.

The teams ranked 6-11 have a mix of Hall of Fame talent and even some relatively lesser-known characters.

With a duo of Hines Ward and Plaxico Burress, the Steelers had one of the most formidable one-two punches in the NFL for a short period. Their contribution alone garners discussion. After all, they combined for over 2,600 yards between them and accounted for 19 touchdowns. However, they also had the versatility of Antwaan Randle El.

Randle El only had 489 yards receiving, but his presence and efficiency helped the offense hum. Thus, star power and top-end performance propelled the 2002 Steelers over the 2006 Bengals’ squad.

Whenever a quarterback throws for 5,000 yards, there’s bound to be some big receiving performances. The law firm of Mark & Mark combined for over 2,600 yards. Mark Clayton led the team with 1,389 yards, while Mark Duper finished with 1,306 yards. On top of their strong performances, Nat Moore added 573 yards receiving.

Clayton was a big-play threat who put together an outstanding career, but his sophomore season was his biggest. He led the league in receiving touchdowns in Dan Marino’s record-shattering season and averaged 19 yards per reception that year.

Speaking of downfield threats, Duper averaged over 17 yards per reception for his career and 18.4 in the 1984 season. Altogether, the trio of Clayton, Duper, and Moore accumulated 3,268 yards, making them one of the best receiving corps of all time.

What a weird team this 1995 Lions’ squad was. QB Scott Mitchell had a season that was a few tiers higher than he ever had before — or would ever have again. He threw for over 4,300 yards, 32 touchdowns, and 12 interceptions. And yet, he never reached the 20-touchdown mark in any other season.

Nevertheless, that doesn’t take away from them having one of the best receiving corps of all time. Herman Moore was selected to three straight All-Pro teams from 1995-1997. Brett Perriman was a fine player that exploded at age 30 in 1995 and followed it up with another 1,000-yard performance in 1996. The two of them combined for 3,174 yards in 1995.

That’s right, just those two combined for what would be a fantastic season for a passer. Actually, Mitchell would only reach that mark as a passer one other time (1997). Add in Johnnie Morton’s 590 yards, and we’re looking at 3,764 yards between the three receivers, making them one of the most prolific trios ever.

The 1995 Falcons don’t necessarily have the high-end star power of the other groups, but they were only the third team ever to boast three 1,000-yard receivers. Additionally, Eric Metcalf was a two-time All-Pro, once as a running back and once as a receiver. Yet, no individual received postseason accolades for the 1995 season.

Metcalf led the team with 1,189 yards receiving. Both Bert Emanuel and Terance Mathis each tallied 1,039 yards for the season. The season itself fell within the awkward June Jones’ period for the Falcons. They weren’t a stellar franchise but caught a bit of lightning to finish 9-7 in 1995, which was good enough for a playoff berth.

Fitzgerald was in his fifth season with the Cardinals at this point. It’s almost inconceivable that he’d still not be on a golf course somewhere enjoying retirement by now.

Nevertheless, in 2008, he generated 1,431 yards receiving and 12 touchdowns. Boldin added 1,038 yards, just narrowly missing the marks set by the two Dolphins’ receivers from the ’84 team. Breaston’s name wasn’t on the list, but he snuck into the club anyways with 1,006 yards. He wouldn’t reach the 800-yard mark in any other season.

The duo of Fitzgerald and Boldin is formidable, and adding Kurt Warner to the mix brought passing production to the entire team. Unfortunately, this 9-7 Cardinals’ team would go on to lose to the Steelers in the final seconds of Super Bowl XLIII. It’s one of the more unfortunate Super Bowl losses because Fitzgerald deserves a ring.

The greatest NFL team of all time that couldn’t get it done in the big game also boasted one of the best receiving corps ever. Randy Moss, Wes Welker, and Donte’ Stallworth teamed up to help produce one of the most spectacular offensive seasons we’ve seen from a football team. Unfortunately for the team’s legacy, they couldn’t finish the job.

Still, Moss was practically unstoppable with Brady in 2007, going for 1,493 yards and a league-record 23 touchdowns. Welker was his usual prolific self in 2007, catching 112 passes for 1,175 yards and 8 score. Stallworth added a respectable 697 yards receiving for the season. The top-two receivers dominated this team, but Moss is one of the greatest to ever do it.

Best receiving corps of all time | 1-5

Which all-time receiving corps can claim top five overall, and which group is No. 1?

The 1989 Washington team was the second to have three 1,000-yard pass catchers. However, they were the first to do it with three wide receivers. The first included Kellen Winslow (not the soldier one). Washington boasted Hall of Famer Art Monk, All-Pro (1987) Gary Clark, and Ricky Sanders. Sanders reached the 1,000-yard mark in 1988, but Monk and Clark both missed it.

All things came together in 1989. There was no tiptoeing over the line in ’89. No, instead, each receiver blasted over 1,100 yards. Clark led the team with 1,229 yards and 9 touchdowns, Monk followed with 1,186 yards, and Sanders was the very productive caboose — tallying 1,138 yards receiving.

Each receiver averaged over 70 yards per game. Also, all three receivers averaged over 13.8 yards per reception. That makes me wish we could get the aDOT for teams dating back that far.

The 2013 Denver Broncos averaged 37.9 points per game. Unfortunately, this author was in Afghanistan for the duration of the season and only got to watch the complete stinker that was Super Bowl XLVIII. Thanks, Broncos.

The trio of Demaryius Thomas, Eric Decker, and Wes Welker was a great group for Peyton Manning to flourish with to the tune of 55 touchdowns, which is still the most ever. Thomas scored 14 touchdowns, Decker had 12, and Welker finished with 10. Moreover, if Welker hadn’t missed three games that season, this could have easily been the sixth team to produce three 1,000-yard receivers. At any rate, it’s pretty easy to see why this is one of the best receiving corps of all time.

They don’t have the Hall of Famer of the other teams in the top seven, but they still produced silly numbers. Thomas might be the best receiver in Broncos’ history, Decker recorded some great seasons between 2012-2015, and Welker was a two-time All-Pro.

This was the moment we all realized Randy Moss was going to be a big, big problem for every cornerback the NFL threw at him. At the time, this was the best rookie season for a receiver ever. In Moss and Cris Carter, the team itself boasted two Hall of Fame wide receivers. Carter was 32 at the time, but he still had two more 1,000-plus-yard receiving seasons after this.

The ’98 team could have easily been replaced by the ’99 team, which was statistically superior, but 1998 put Moss on the map. The Vikings also went 15-1 in that season and could have gone down as one of the greatest teams ever if it hadn’t been for their NFC Championship loss to the Atlanta Falcons.

Moss went for 69 receptions, 1,313 yards, and a whopping 17 touchdowns. For those without a calculator, that’s an average of 19 yards per reception — and he did so as a rookie.

We could have chosen any Colts team featuring Reggie Wayne and Marvin Harrison — but luckily for us — Brandon Stokley ascended into a 1,000-yard receiver for one season. That sure made this an easy choice.

Harrison is already cemented in the Pro Football Hall of Fame. Wayne is a Hall of Fame finalist, but for some reason, just hasn’t gotten the votes yet. Conversely, in Stokley’s second-best season, he went for 635 yards.

Wayne led the trio with 1,210 yards and was second in touchdowns with 12. Harrison, meanwhile, scored 15 touchdowns and amassed 1,113 yards receiving for the year. Stokley added 1,077 yards and 10 receiving touchdowns. This is one of the best receiving corps of all time — on one of the most talented offenses ever.

Ah, the greatest show on turf. Of course, the 2001 Rams would be the better team, going 14-2 and reaching the Super Bowl. But this was the team with an unmatched year from their receivers. Their top-four receivers caught 253 passes for 4,281 yards and 23 touchdowns.

Az-Zahir Hakim added 734 yards receiving, and Ricky Proehl tacked on 441 yards. Hakim and Proehl both enjoyed solid, long NFL careers, and they were part of a defining offense in their time in Saint Louis.

Above all, this ranking has to do with the two HOF-caliber players that paired well together with Kurt Warner. As a result, this is the best receiving corps of all time.