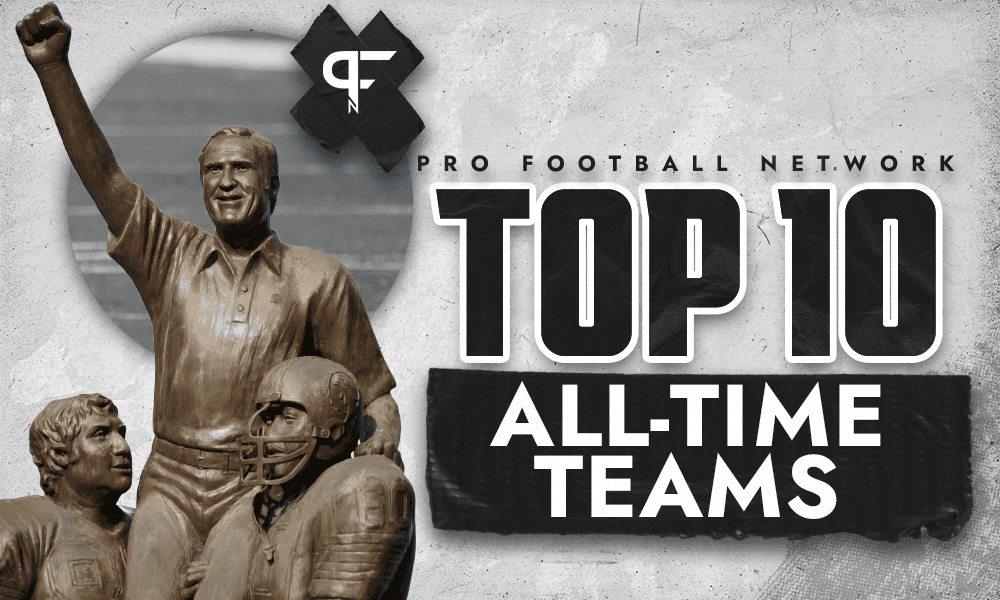 Unlike looking at the top quarterbacks of all time, where we do not want to focus solely on championships, the ultimate team goal in the NFL is to win a Super Bowl. Ranking the greatest NFL teams of all time was a more contentious conversation within the PFN staff than I imagined it being. The greatest teams in NFL history had to do it on both sides of the ball.

We looked at the relative dominance of each team in their respective years. Two metrics we weighed heavily were points scored above the mean and points allowed below the mean. Only one team on this list of the top 10 teams of all time failed to win the ultimate goal. Some dominance is so apparent that it cannot be ignored.

It’s important to note we discussed two honorable mentions for the list. The 1962 Green Bay Packers have an argument as the greatest NFL team of all time, but they only played in one playoff game and the championship before the Super Bowl era. The legendary Vince Lombardi also coached them.

Every team on the list is from the Super Bowl era. The 1976 Oakland Raiders went 16-1, but their résumé of dominance does not compete. They ranked fourth in scoring and 12th in points allowed. However, they turned the ball over more than their opponents. Furthermore, the Raiders were 6-0 in one-score games. They had an outstanding passing attack but lacked the chutzpah of the other teams on the list, despite their record.

Which teams in NFL history are amongst the top 10 greatest of all time?

The 1998 Denver Broncos rode what was an absolute workhorse in Terrell Davis to their second straight Super Bowl. The Broncos’ offense had seven players make the Pro Bowl, while Bill Romanowski and Steve Atwater made it on the defense.

This offense was much like the Cowboys from 1992. It was a top-10 machine in every category outside of passing attempts. Nevertheless, the real hero is No. 30 (Davis). Davis averaged 125.5 yards per game, 5 yards per carry, and scored 23 total touchdowns. The next leading rusher on the team, Derek Loville, averaged just 3 yards per carry on 53 rushing attempts.

Quarterback John Elway was 38 at the time and missed four games throughout the regular season. Backup Bubby Brister actually posted a higher completion percentage, a better touchdown rate, and a lower interception rate in his four starts. In the end, this team was about rushing and rush defense.

The 1992 Cowboys aren’t unlike that of the 2020 Cowboys. After all, the ’92 Cowboys saw six players on offense make the Pro Bowl and none on defense. Actually, that’s where the similarities end because the defense in 1992 was stellar.

The ’92 Cowboys were second in scoring offense and fifth in scoring defense. They’re one of the greatest teams in NFL history because they were so consistent on both sides of the ball.

The “Greatest Show on Turf” needed to have an unbelievable offensive output, right? Yes, actually.

The 1999 Rams scored 58% more points than the league average, making them one of the greatest NFL teams of all time. Still,hey benefited from the easiest strength of schedule of any of the top teams (-5.88). But you can only play who’s in front of you.

The team produced four first-team All-Pros in 1999. What may be even more impressive is this offense had four future Hall of Fame members. In fact, Kurt Warner just missed out on our list of the top 10 greatest quarterbacks of all time.

The defense probably doesn’t get the love it deserves because it was only fourth in scoring. Still, they ranked second in points per drive. Furthermore, the rushing defense allowed a league-low 4 rushing touchdowns all season!

The 1975 Steelers boasted 11 Pro Bowl players and three All-Pros. The three All-Pro players all made their livings on the defensive side of the ball. L.C. Greenwood, Jack Ham, and Mel Blount all received first-team recognition. The vast amount of individual talent on the roster makes this one of the greatest teams in NFL history.

They didn’t have the most explosive offense on the list, as it was the “worst” of the 10 teams. Yet, their defensive points allowed below the average was a whopping 43.8%, which tops even the ’85 Bears’ that season.

This 49ers team is one of the greatest NFL teams of all time based solely on star power. Joe Montana, Roger Craig, Steve Young, Jerry Rice, and Ronnie Lott all played on the 1989 team. Furthermore, Montana, Rice, and Lott were all awarded first-team All-Pro honors.

The Niners were an offensive juggernaut, leading the league in points scored. They also finished third in scoring defense and forced more interceptions defensively than they allowed passing touchdowns. Montana and Young combined for the most touchdowns and least interceptions in the NFL that year. The passing attack also finished first in net yards gained per pass attempt.

In 1989, Rice led the league in receiving yards and touchdowns. Meanwhile, Montana led in eight passing categories, including yards per game, touchdown rate, and yards per attempt.

There shan’t be a question about who leads the list. Where does your favorite dominant team rank?

Speaking of absolute reckoning, the 1991 Washington team might deserve a higher ranking on the list. Sadly, they have an extra tick in the loss column than the ’84 49ers and ’85 Bears.

Their offense was similarly impressive to the 2007 Patriots. This is one of the greatest NFL teams of all time for that reason alone, but also their defensive dominance. Washington’s offense scored a staggering 59.6% above the league average. Their defense, conversely, ranked second in the league. The team allowed 26.3% fewer points than the league average for 1991.

The 1991 team had two All-Pros in OT Jim Lachey and CB Darrell Green. Moreover, Washington boasted six Pro Bowlers, including their QB, RB, and leading WR. Art Monk also registered over 1,000 yards receiving but did not make the Pro Bowl.

I’d argue this is the best of the greatest teams in NFL history. Unfortunately for them, they had performance issues when it mattered most. Losing to a flukey New York Giants team in the Super Bowl doesn’t help their case for the most outstanding team ever. However, their offensive output alone almost matches the overall dominance of the top three teams relative to the mean.

Unfortunately, that three-point loss to the Giants due to the right arm of Eli Manning and the earhole of David Tyree ruined the Patriots’ chance at immortality. It’s a shame, too. This team was the most dominant force ever assembled, and it happened AFTER THE INTRODUCTION OF THE SALARY CAP! It would take a miracle for this to ever happen again.

The 1984 San Francisco 49ers are one of the greatest teams in NFL history. However, this 49ers team has an interesting lack of personal achievement relative to their team dominance for the year.

Offensive tackle Keith Fahnhorst was the only first-team AP All-Pro on the 1984 roster. Nevertheless, the 49ers’ offense commanded the rankings.

They suffered from the fewest turnovers in the league. Montana’s 32 passing touchdowns ranked second, and his 10 interceptions ranked first. The 49ers also came in second in net yards gained per pass attempt.

The rushing attack was similarly dominant. The 49ers finished second in average per rush and touchdowns. They were also third in total yards on the ground.

The argument between the 1985 Chicago Bears and 1984 49ers for the second greatest NFL team of all time was the most difficult. After all, they happened in back-to-back seasons. Both teams finished second in points scored and first in points allowed.

The Bears’ defense also forced 54 turnovers and allowed just 12.4 points per game. That defense boasted three first-team All-Pros and five Pro Bowlers. Overall, the team generated five first-team All-Pros and nine Pro Bowlers. But what put the ’85 Bears over the ’84 49ers was the strength of schedule. The Bears SOS was -0.19 compared to the 49ers -2.75.

They were doing the Super Bowl Shuffle, and Walter Payton was dual-threatening his way toward his fifth and final All-Pro selection.

The undefeated 1972 Dolphins sit on the throne of the greatest NFL teams of all time. They had, by all accounts, a cupcake of a schedule. Red velvet, maybe?

Despite their -4.27 SOS (strength of schedule), that is only good for the second easiest on the list (stay tuned). The ’72 Dolphins are the only team on this list to best the league in points for and points against.

The amazing thing about the 1972 season is they did it mostly with backup quarterback Earl Morrall at the helm, winning nine games. He was also named as a first-team All-Pro that season. Additionally, both Larry Csonka and Mercury Morris (which still might be the greatest name of all time) rushed for over 1,000 yards and made the Pro Bowl in 1972.

Legendary Dallas Cowboys head coach Tom Landry coined the ’72 Dolphins’ defense as the “No-Name Defense” because the offense won the headlines while the defense quietly dominated. The team ended up with four All-Pro selections and nine Pro Bowlers.

As already stated, they led in points for and against. The Dolphins were also first in yards gained and yards allowed. They tied the Steelers for first in fumbles recovered and were second in defensive interceptions.

Additionally, Miami was second in offensive first downs and allowed the least amount of first downs in the league. The Dolphins ranked third in both net yards gained and allowed per pass attempt. If that wasn’t enough, they ranked first in rushing attempts, yards, and yards per attempt. Despite rushing the ball 69 more times than the next-closest team, and 354 more times than they passed the ball, they ranked second in yards per carry with 4.8.