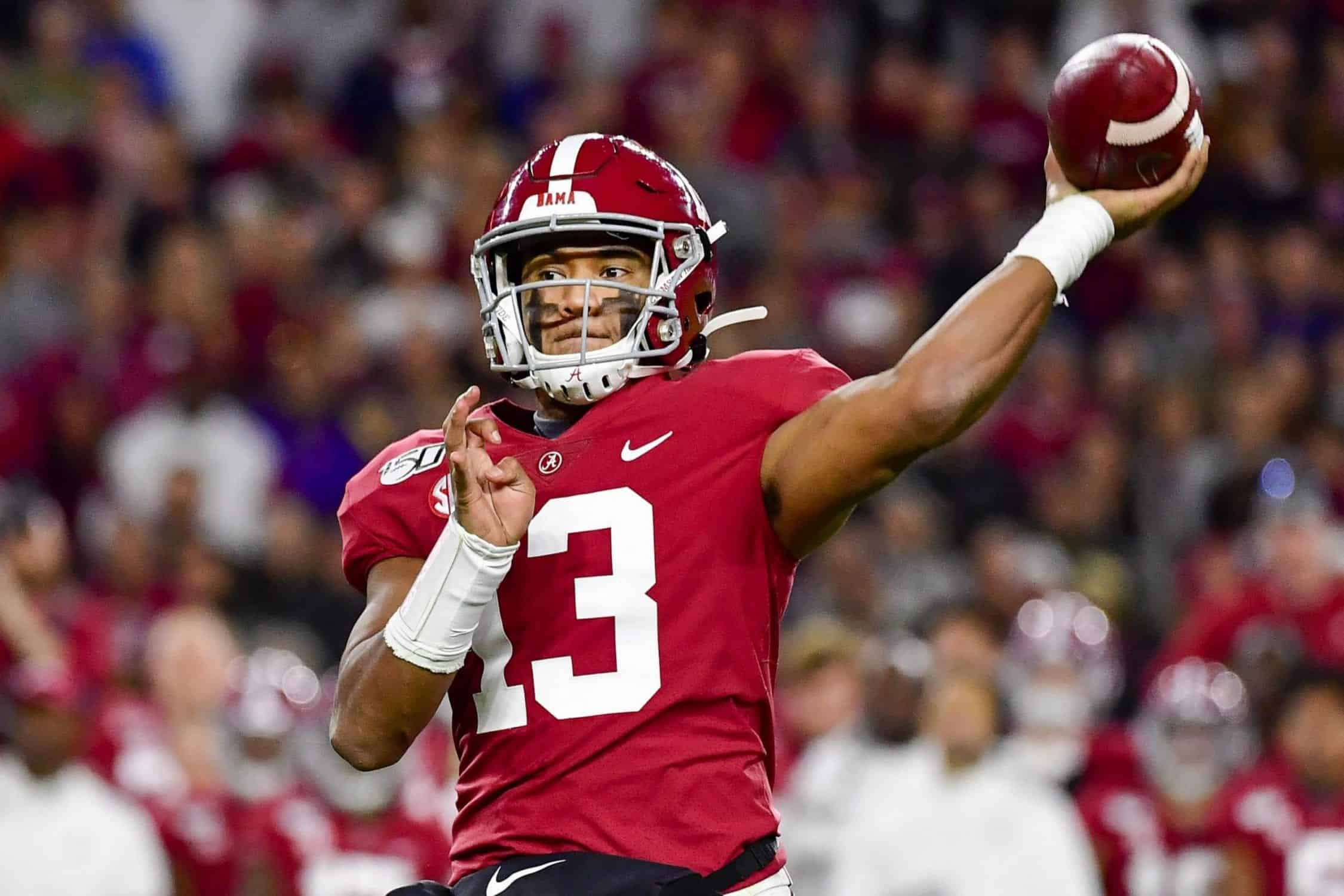 The Miami Dolphins had two first-round picks this year. With their first, general manager Chrie Grier selected quarterback Tua Tagovailoa. He followed that up with offensive tackle Austin Jackson and cornerback Noah Igbinoghene.

Pro Football Network was lucky enough to be joined by Dolphins wide receiver Preston Williams to get his opinion on the new additions. Analysis of each of the picks is below the videos.

Reaction to Tua Tagovailoa being selected

Reaction to Austin Jackson being selected

Reaction to Noah Igbinoghene being selected

With the fifth pick in the first round of the 2020 NFL Draft, the Miami Dolphins have selected quarterback Tua Tagovailoa. After months of speculation, and an intense blitz of (mis)information in the days leading up to the pick, the Dolphins finally have their man.

The need for a quarterback was apparent after the Dolphins let former starter Ryan Tannehill leave for the Tennessee Titans before the start of last season. Tagovailoa becomes the next in a long line to try and fill those shoes.

Miami has been in need of a true fixture at the quarterback position since Dan Marino retired in 1999. The franchise has been tied to the former Crimson Tide quarterback for months, and the front office clearly believes in Tagovailoa, despite the obvious health concerns.

“When healthy and on the field, Tagovailoa was a productive quarterback who naturally led the Alabama offense up and down the field. While he lacks pocket stature, he possesses all the other traits and qualities necessary to be a starting quarterback in the NFL.

The hip injury suffered late last season is a big question mark and will be viewed differently around the league, but from a passing and intangible point of view, Tagovailoa is the top quarterback in this year’s draft.”

In Tagovailoa, the Dolphins are getting an accomplished quarterback with a stellar resume. His accuracy in the intermediate areas should mesh well with the talent Miami has in their wide receiver corps. Tagovailoa’s ability to make plays with his legs should add another dimension to Miami’s offense. Don’t expect his rushing ability to be a focal point of the offense, however, given his previous injury history.

Now the Dolphins’ focus shifts to their remaining first-round picks and the rest of the NFL Draft. With the quarterback in place, filling the remaining holes in the roster is of paramount importance. It’s time to build a playoff contender.

With their second pick (18) in the first round, the Miami Dolphins have selected offensive tackle Austin Jackson. With the quarterback they believe to be the future of the franchise, it’s all about giving him some protection.

The Dolphins had a gaping hole at left tackle after the team traded Laremy Tunsil to the Houston Texans last season. Rather than waiting to use the first-round pick they received in that trade to address the issue, they take an offensive tackle with the pick they received from Pittsburgh. Jackson becomes the fifth offensive tackle taken in the first 18 picks, and will likely have to step in and play immediately.

The question becomes, will he be able to step in and provide the immediate protection that Tua is going to need to survive his rookie season? Here’s what PFN Chief Draft Analyst and Insider Tony Pauline had to say about Jackson in his official scouting report:

“Jackson was a terrific left tackle for the Trojans the past two seasons and displayed good athleticism during combine testing. He comes with big upside and starting potential and should only improve as he physically matures.”

Jackson does have some work to do, both physically and in his technique. However, there’s a ton of upside with him. Both Tagovailoa and Miami fans everywhere should be happy with the pick and with the idea that Miami is finally addressing their needs upfront.

With their third and final selection in the first round (30), the Miami Dolphins select cornerback Noah Igbinoghene. Originally, the Dolphins held the 26th pick in the first round, the pick they got back as part of the Laremy Tunsil trade. Miami flipped that pick to the Green Bay Packers in exchange for pick #30 and a fourth.

Igbinoghene, a former wide receiver at Auburn, won’t come in and supplant either Howard or Jones for a starting position on the outside. However, the plan may be for Igbinoghene to come in and see time at nickel cornerback. If that’s the case, it may signal a move for incumbent nickel Bobby McCain to safety.

Igbinoghene may be a luxury draft pick for the Dolphins, but you can never have too many good cornerbacks. PFN Chief Draft Analyst and Insider Tony Pauline also thinks a move to nickel could be the plan with Igbinoghene, saying this in his scouting report:

“Igbinoghene was a solid cornerback for Auburn who displayed consistent progress the past two seasons. He possesses the size and speed to be a nickel corner and return kicks.”

Igbinoghene caps a very solid first round for the Dolphins. Each of the three picks should provide the team with much-needed value as the front office continues the rebuild.