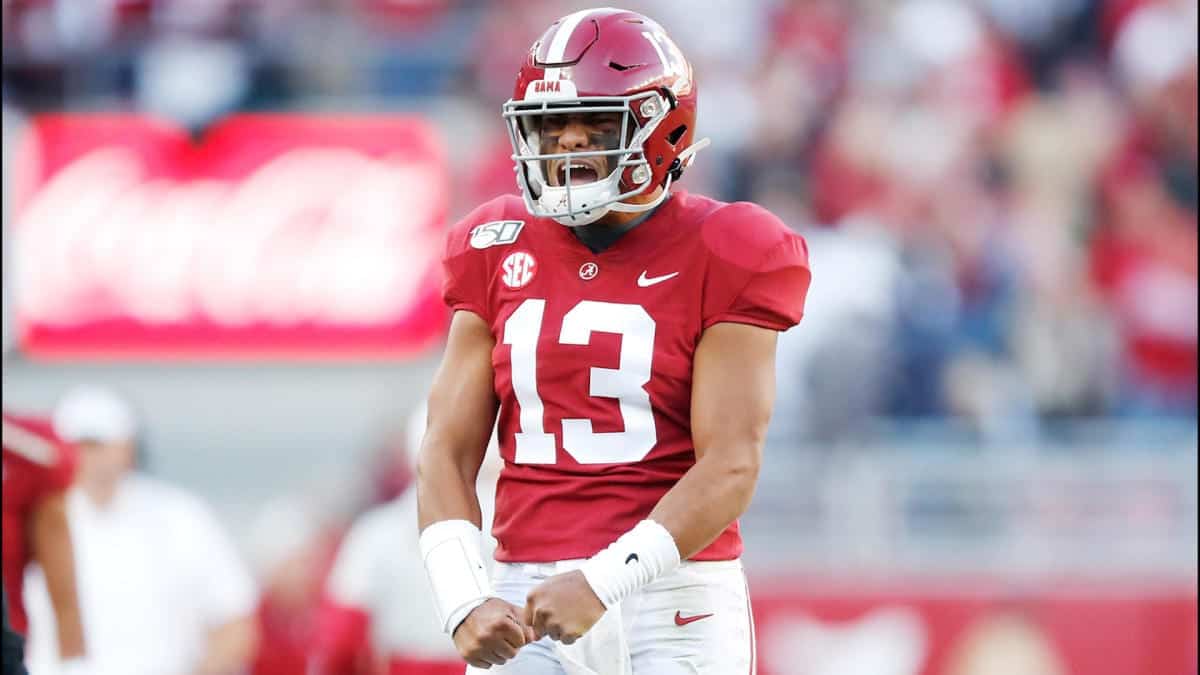 Despite all the craziness going on in the world, sports fans have something to look forward to this week. The 2020 NFL Draft is merely two days away. All of the scouting reports, mock drafts, and player rankings will come to a head, and the utter chaos that comes with the NFL Draft will occur. In the draft community, Ohio State pass rusher Chase Young is widely considered the best player in this class, and LSU quarterback Joe Burrow is assumed to be the best quarterback. It may be controversial, but I don’t agree with either of these notions. To me, Alabama quarterback Tua Tagovailoa sits above the rest in my Top 500 2020 Big Board in this draft.

Sure, Tagovailoa comes with some injury concerns, but I am not a doctor, and I’m not going to attempt to play one. From everything I’ve seen and read, I do not share long term injury concerns when it comes to Tagovailoa. On the field, he is magic, as he is cerebral, accurate, and a brilliant playmaker. To quote NFL Network’s Daniel Jeremiah, he is “super twitchy” and throws with tremendous touch and anticipation. While both Young and Burrow are elite prospects in their own right, give me Tagovailoa any day of the week.

In fact, as brilliant as Burrow was in 2019 (and he truly was absolutely spectacular), I carry concerns about whether he could be a “one year wonder”. It’s not often when a player enters the collegiate season projected as a late-round prospect and then becomes the first overall pick in that year’s draft. It will come as a surprise to many, but Alabama’s Tagovailoa isn’t the only quarterback I prefer over Burrow. I favor the big-armed University of Oregon QB Justin Herbert as well.

So, without further ado, let’s take a look at my Top 500 2020 Big Board to find some more surprises, shall we?

Georgia’s Andrew Thomas is my top-ranked offensive tackle in the 2020 NFL Draft. He is the best pure left tackle in this draft class, as Jedrick Wills and Tristan Wirfs have spent the majority of their playing time on the right side.

The draft community has soured on the standout LSU safety, as concerns about his ability to tackle have surfaced. For me, Delpit is the best centerfield safety in this class. His 2018 tape was brilliant. He flashed the ability to be one of the league’s best safeties. One underrated quality when it comes to Delpit is his ability to blitz.

It may come as a surprise to some, but Dobbins is my top-rated running back in the 2020 Draft. His contact balance is elite, as is his ability to shine on the brightest of stages. Georgia’s D’Andre Swift, Wisconsin’s Jonathan Taylor, and LSU’s Clyde Edwards-Helaire are magnificent players as well, but my top choice is Dobbins.

Injuries have hampered the draft stock of the star Colorado wide receiver. However, I am a big believer. What he can do with the ball in his hands after the catch is special. I love him as a fit for the Baltimore Ravens to complement “Hollywood” Brown.

He is far from a finished product, but Hurts comes with special traits and unparalleled intangibles. In mock drafts, he has been falling to the third round, which is absolutely insane value for whatever team selects him.

I might be higher on Lewis than anyone out there. He is a big, strong, and nasty mauler who can be plugged in at right guard for the next decade.

Remember when the Wisconsin center was a top-10 player in the 2020 Draft? He slipped some in 2019, but there is a quality player there.

Despite showing a tremendous athletic profile and outstanding movement skills at the NFL Scouting Combine, I am not buying the first round hype on Cleveland. He is battle-tested, with over 40 starts at Boise State. However, the draft is littered with better options.

Okwuegbunam is a marvelous athlete and comes with a tremendously high ceiling. If a team selects Okwuegbunam and makes it simple for him, he should be able to produce at a high level.

The bottom line is that Bowden is a dynamic playmaker. Whichever team selects him should be creative with how they get him the rock, because he could be an absolute steal in this draft.

Watch his game tape in the matchup against Ohio State in 2019, and you’ll see that he was the best player on the field. He is a bowling ball that can create yards after contact.

Gilman can be that enforcer in the secondary that teams covet. He is athletic enough to cover tight ends and is lethal around the line of scrimmage.

Weaver is a tackling machine who is always around the football. He is not the best athlete, but he is technically sound and has an impressive motor.