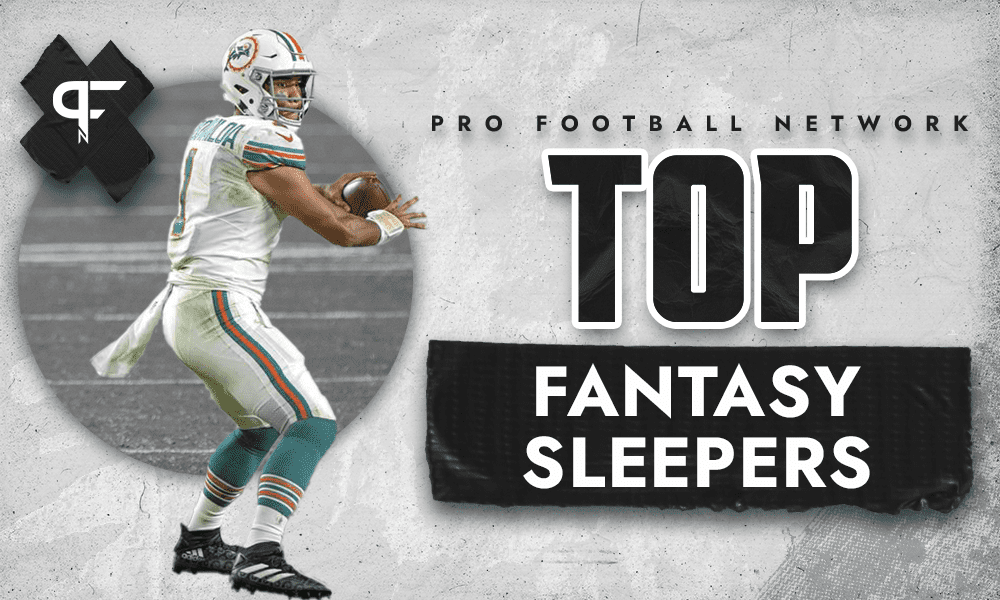 Although the 2021 NFL season is still months away, it is never too early to try and get an edge over the competition. Whether it is looking for breakout candidates, busts to avoid, or simply players worth their ADP, there are plenty of ways to get the leg up over your league-mates. As such, who are some fantasy football sleepers you should targeting heading into the 2021 season?

What makes a player a fantasy football sleeper in 2021?

The term sleeper is widely overused in the fantasy landscape. It tends to get thrown around to any player coming off a down season. For example, Michael Thomas is not a sleeper. He is just a potential value. There is a big difference.

When looking for fantasy football sleepers in 2021, there are a few things to look for that could be helpful when dialing in on certain players. Look for opportunity. While a broad term, it still holds true and can come in many forms.

Perhaps they changed teams in free agency or saw someone they previously shared opportunities with join a new team. An example of this would be Melvin Gordon. While not in the “sleeper” category, he is a fantastic value following Phillip Lindsay’s release. His ADP has not caught up with his potential value, and he’s a player I will be targeting heavily, but that is a discussion for another day.

Another example would be the landing spot of rookies on a team who saw a significant turnover at a position. The Tennessee Titans come to mind here at the wide receiver position. Generally, rookies get over-drafted in their first season, but if you hit on the right one, like Justin Jefferson, the payoff is massive. With Corey Davis now with the Jets and Jonnu Smith in New England, the Titans lost players who accounted for 56.6% of the intended air yards and 47% of the touchdowns.

First, let’s examine the quarterbacks who are being slept on.

Before Burrow’s season-ending ACL injury, he was on pace for 4,300 passing yards and 25 total touchdowns. He averaged 21 fantasy points per game in 10 active games with four QB1 performances.

The Bengals’ offensive line was awful last season as Burrow was sacked 31 times. The good news is that Cincinnati addressed the unit this offseason.

Burrow will also be supported by a strong group of receivers including first-round selection Ja’Marr Chase, Tee Higgins, and Tyler Boyd.

Furthermore, the Bengals’ defense will continue to be an abomination in 2021. Thus, Cincinnati will have to lean on its offense early and often. This bodes well for Burrow’s fantasy outlook this season. He could finish as a low-end QB1 in 2021.

Tagovailoa’s rookie season was underwhelming. He only averaged 15.6 fantasy points per game in 10 active games with one QB1 finish. Offensive coordinator Chan Gailey’s scheme lowered Tagovailoa’s ceiling last year. With Gailey relieved of his duties, that will change in 2021.

Tagovailoa has an intriguing group at wide receiver, including DeVante Parker, Will Fuller, and first-round selection Jaylen Waddle. All three of these receivers can attack defenses vertically. This is something Tagovailoa wasn’t asked to do in 2020. The Dolphins also have an excellent tight end in Mike Gesicki. Miami has enough offensive weapons to trot out a robust passing game in 2021.

Tagovailoa can create fantasy points as a passer and also as a runner. As a result, he has the potential to finish as a low-end QB1 in 2021.

Trevor Lawrence is the prototype of the modern franchise quarterback. He was a dynamo at Clemson, throwing for 10,098 passing yards from 2018 to 2020. This ranks third in Clemson’s history. Lawrence also finished fourth in completions (758) and second in passing touchdowns (90) in school history.

Jacksonville isn’t a terrible landing spot for Lawrence. Head coach Urban Meyer is an unproven commodity at the NFL level, but his collegiate body of work is well documented.

Lawrence is surrounded by a solid group of skill position players. Running back James Robinson, wide receivers D.J. Chark, Laviska Shenault, and Marvin Jones are all viable options. Meyer will position Lawrence for success, and his ability to create fantasy points as a runner adds to his intrigue.

Only six quarterbacks over the last six seasons have finished in the top-16 during their rookie seasons. Lawrence has a legitimate chance to join this group in 2021.

Who are some running backs flying under the radar in fantasy drafts?

Javonte Williams and University of North Carolina committee mate Michael Carter steamrolled defenses last season. Williams finished 2020 with 157 rushing attempts, 1,140 rushing yards, and 19 rushing touchdowns. His rushing yards were the 13th-most in program history, sixth-most in the country, and third-best in the ACC. He generated 27 rushes of 15 or more yards, averaging a robust 7.3 yards per attempt. The Tar Heel also caught 25 passes for 305 yards and 3 touchdowns. His takeover of the Broncos backfield is imminent.

Denver enters the 2021 season with 127 unaccounted rushing attempts due to the departure of Phillip Lindsay. Williams will inherit that volume and has an eerily similar skill set to Melvin Gordon, who is entering a contract year. This will help Shurmur significantly as he executes the Broncos’ offensive game plan. Both backs are capable of running inside or outside and display excellence as receivers out of the backfield.

The Broncos backfield is shaping up to be more of a 50/50 split. Williams has the upside to finish as an RB2 in 2021 behind this Mike Munchak-led offensive line.

The Patriots’ coaching staff is enamored with using a running back by committee. This can be frustrating, but New England has consistently had a robust running game with outstanding offensive line play.

Damien Harris got off to a slow start in 2020 because of an ankle injury. In 10 games played, he averaged nearly 14 rushing attempts and 69 rushing yards per contest. Harris averaged 0.67 fantasy points per rushing attempt, with nearly all of his touches being provided on first and second down.

Furthermore, Harris averaged 5 yards per rushing attempt in 2020 while facing stacked boxes on 42.3% of his rushing attempts. The Patriots did not pick up running back Sony Michel’s fifth-year option, and he will likely be cut during the preseason. The stars are aligning for Harris to have a breakout campaign.

Penny has only been active in 26 games throughout his three-year NFL career. He will open the season as the No. 2 running back behind Chris Carson. Carson has averaged 19 opportunities (rushing attempts plus targets) and 15.5 PPR fantasy points per game since 2018.

The Seahawks have 95 unaccounted rushing attempts and 144 available targets entering this season. There are enough opportunities for Penny to carve out a significant role, especially since Carson has had his fair share of ailments over the years.

The departure of Jamaal Williams in free agency to the Lions has overshadowed the opportunity Dillon has in front of him. The second-year running back will inherit the 150 touches that Williams left behind. Dillon enjoyed a productive collegiate career at Boston College.

He rushed for 1,000 or more yards in all three of his seasons with the Eagles. Dillon finished 14 games with 150 or more rushing yards while surpassing 200 in four. Moreover, Dillon holds the Boston College records in rushing yards and rushing touchdowns. His 845 rushing attempts were an astounding amount, but he only missed two games in his college career.

Dillon can be viewed as a high-end RB4 but has the potential to be a league winner if Aaron Jones missed an extended amount of time.