The Steelers have a stacked, deep team in 2020. It will not be easy to cut down the roster to 53, even with the added padding of a sixteen-player practice squad. From lots of talented wide receivers to a deep running back room, the Steelers are going to say goodbye to some talent regardless. Who are some of the known Steelers offensive players on the roster bubble in 2020?

Breaking down those veterans and their chances in the global climate right now are tough, but with some training camp nuggets, an informed guess can be waged on if they will make the roster or not. Here are four veterans fighting for a spot on the Steelers’ final roster.

Can Jaylen Samuels Hang On?

While the Steelers dealt with injuries to everyone in their backfield last season, Jaylen Samuels picked up a good deal of work when lead running back James Conner was out. Samuels, a former fifth-round draft pick, has proven to be far more of a receiver than runner up to this point with the Steelers.

Last season Samuels had over 300 yards receiving to his meager 175 yards rushing. The reason Samuels is even in this spot, however, is due to his average play in 2019. With only 13 broken tackles in 13 games, Samuels did not do a lot to create yards for himself in the open field. Perhaps even more important was his lack of vision as a runner. Samuels has proven to be ineffective in between the tackles, as he does not process defenses fast enough.

The real question is, can anyone push him off the roster. If anything, Samuels has proven to be a capable receiver in the NFL. The Steelers can trust him out wide and in the slot on top of various other duties outside of the backfield. For Samuels to get cut, a running back will have to show themselves as a capable receiver.

Samuels is not a great athlete and does not create much in the open field. That is his primary weakness. Samuels may survive the impending cuts due to his receiving upside. With Wendell Smallwood and Kerrith Whyte now injured, Samuels’s path seems much more comfortable than it was before, and he likely makes the team.

Pittsburgh’s fierce battle for the third quarterback spot on the final 53-man roster is a battle that hopefully never has to matter. In an ideal world, neither Devlin Hodges nor Paxton Lynch would see the NFL field in a meaningful game. In 2019, after a flurry of injuries at quarterback, Hodges got thrown into the fire. While it had a good beginning, Hodges struggled to end the season.

Over the final three weeks of the season, Hodges threw six interceptions and only one touchdown leading to an 0-3 record during that span. Even over the whole season, Hodges has some rough stats. Most notably, Hodges only completed an abysmal 23.2% of his passes when pressured. Known for often bailing out of clean pockets and creating pressure by himself, Hodges’ pocket management got him into sticky situations last season.

Lynch certainly has more natural tools than Hodges, but thus far in his NFL career, he has been abysmal. There is nothing here that the Steelers are investing in other than physical upside. When under pressure in his career, Lynch has completed only 17.6% of his passes. His deep ball completion percentage is a mere 33.3% compared to Hodges’ 36.4%. In other words, Lynch is erratic at best accuracy-wise.

If Lynch could make up for it in the mental department, he may be a worthy contender, but Hodges is simply a better processor at this point. Both are not ideal NFL quarterbacks, as their tape reveals, but Hodges has more comfort at being a game manager who hit his targets semi-accurately, which is more than can be said for Lynch. As such, Hodges has the edge.

The Steelers bet on a high-upside waiver wire pick up when they took a chance on Deon Cain in the middle of the 2019 season. After flaming out with the Colts, Cain got a second chance in Pittsburgh, and for the most part, Cain capitalized on the opportunity that was presented to him.

While nothing special, Cain’s size and grittiness were easy notes to take from his on the field activities. He made a few very lovely leaping adjustments and contested-catches throughout the second half of the 2019 season.

How Cain will perform in 2020 is anyone’s best guess, but new rookie Chase Claypool does provide a lot of similarities this offense to Cain, but somewhat even better. Still, Cain is a versatile receiver who can play a few positions in the offensive formation. His size and speed allow him to be excellent depth insurance in the case of any injuries to the top four wide receivers on the team.

Most importantly, there is still an upside to unlock with Cain. His speed and size combination could reveal a more significant vertical threat if he works on his releases off the line to create more separation and natural throwing windows. As of now, he has to worry about Amara Darboh, Ray-Ray McCloud, and Anthony Johnson pushing on his heels. Still given his upside, Cain seems relatively safe to make it on the roster if the Steelers keep six wide receivers. 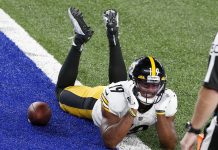