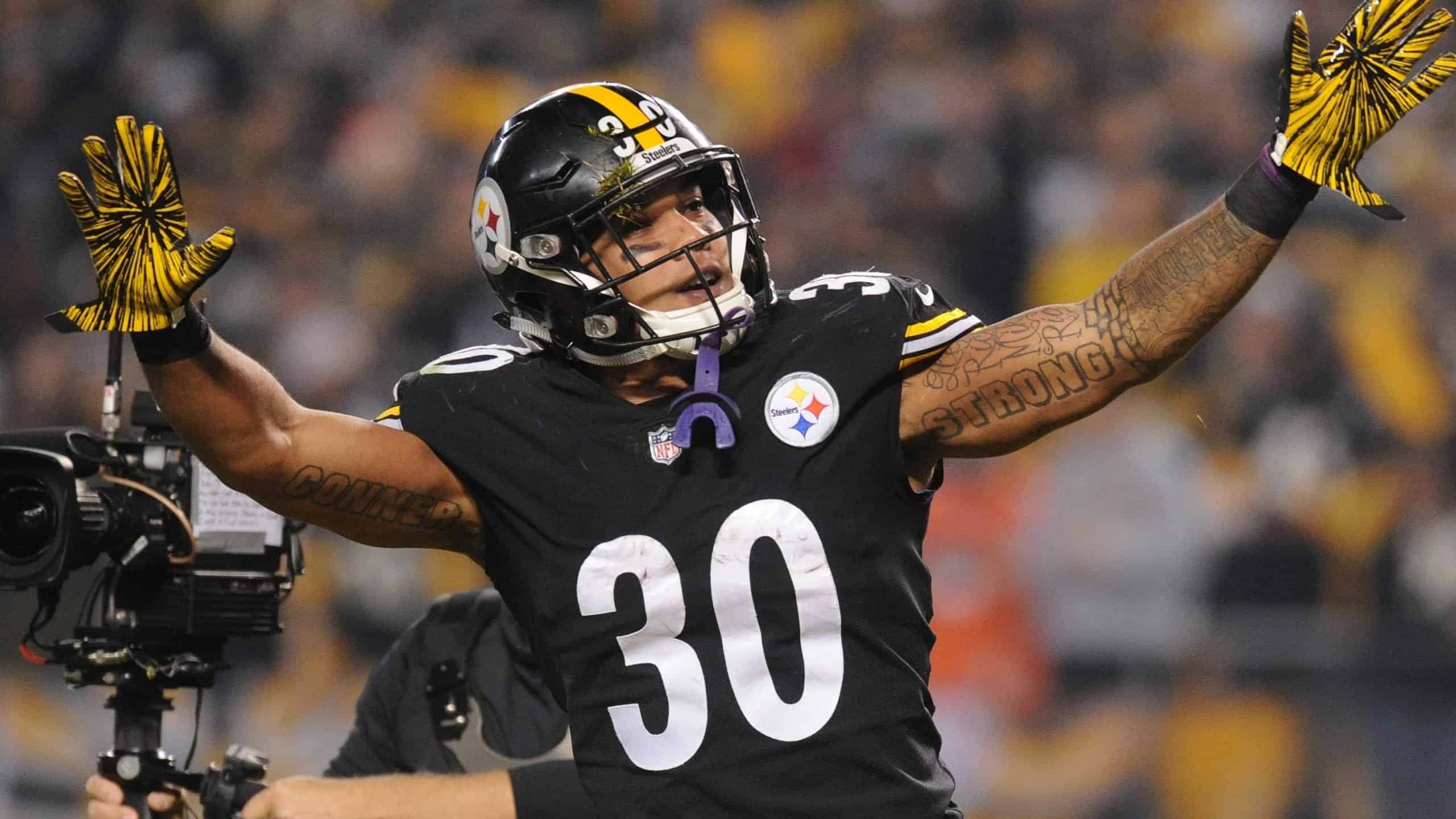 Photo Credit: USA Today Sports
What's in this article? Click to show
The Roster Locks
The Battle for RB4
Who wins the battle?

The Pittsburgh Steelers’ 2020 running back room has the assortments of all the skillsets you could find around the NFL. The speedy running backs, the classic old power running back, and the mixed, well-rounded, good running back. When it comes to this room, the Steelers are indeed looking for them to step up. James Conner is at the forefront of those heightened expectations, but make no mistake, any running back who makes this roster will have less pressure on their shoulders with the return of Ben Roethlisberger. With a battle brewing at the bottom of the depth chart, someone in this room will have their chance to prove themselves this training camp.

While the Steelers have several players competing for the last running back spot, there seem to be three players that can consider their place on the roster safe heading into the 2020 season.

Conner had about as tough of a time as anyone last season. After a nagging shoulder injury held him to a measly ten games last season, Conner will look not just bounce back in a big way, but stay healthy. In a contract year, Conner is looking to cash in. Even after a production dip last season, there were signs that Conner is still a potent weapon in the open field. He was 7th in the NFL in missed tackles per touch and was a high-level receiver out of the backfield.

The reality is for Conner to succeed as the featured workhorse; he has to stay healthy and do his thing. Conner is a talented running back that can do everything a team asks of a running back, but his success relies upon his health more than anything.

Coming off a rookie year where he was mainly deployed as short-yardage running back, Snell will look to expand his repertoire and prove to the Steelers that he could be the next guy in line as the featured runner should Conner walk after the 2020 season. The Steelers coaching staff seems to love the Kentucky product, which always helps.

The aptly named “Benny Snell football” refers to Snell’s brand of hard, tough-nosed running behind his pads to grind out as many yards as possible at all costs, and he does it well. Snell has the vision and contact balance to gain some yardage too. However, while he has lacked burst in the past, it appears he has slimmed down, which could help him to cut through the line more efficiently and with more velocity. Additionally, Snell needs to showcase himself to be a capable receiver. If he can check both of those boxes off this season, then the Steelers will be pleased.

The Steelers fourth-round draft pick strikes a deviation from their usual bigger running back mold by bringing in a lighting fast track star in McFarland. At Maryland, McFarland’s standout game was against Ohio State, where he carved up the Buckeyes for 298 rushing yards. However, in 2019, his stats took a step back due to a nagging ankle injury.

While the future looks exciting for the dynamic speedster who destroys angles, the current global situation likely relegates McFarland to limited playing time outside of special teams in 2020. He still needs to prove himself as a viable receiver and improve in pass protection to be a three-down back, but the Steelers are likely excited to have a big-play element in their backfield. To start 2020, he may be the Steelers kick returner and could be a valuable contributor in that area.

The Battle for RB4

When it comes to the battle for the last running back on the roster, it comes to four guys overall, all of varying different experience levels in the Steelers system and the NFL.

Samuels is the apparent favorite out of the three guys that are listed here. With two years of experience already in the system, Samuels comes out with a significant advantage given the current situation and limited offseason programs. However, after being placed on the COVID list Sunday, a wrench has been thrown in his outlook. Samuels lacks the true skills of a seasoned runner, and there is substantial concern about his lateral agility and vision.

However, Samuels wins in the receiving department. With Roethlisberger back, the Steelers may want to employ more empty sets in 2020, which would lend itself kindly to Samuels, who played significant time as a tight end while at NC State. In the 2020 Steelers running back room, Samuels is unique in that aspect. However, there are some negatives that cannot be ignored. There is not a ton of significant upside to him as a creative runner, with modest contact balance and maxed out athleticism. Still, he offers an alluring skillset that the Steelers may want to keep on the roster.

Related | Steelers Mailbag: Can Terrell Edmunds take the next step in 2020?

Whyte was a delightful stick of dynamite in the short amount of touches he received last season with the Steelers. On only 25 carries, he broke 12 tackles and sprung four carries for over 20 yards. That in and of itself is some exciting news in a Steelers backfield that has lacked that creative playmaker in the past, especially last season. Whyte’s role was as just a pure runner, and thus far has not proven to offer much as a receiver or pass protector. However, he was a reliable returner, which is another positive when it comes to his chances of making the roster.

The issue for Whyte comes in the fact that McFarland now sits on the roster as the speed back. If this team is going to look for an array of skillsets to work with, they may lean towards other backs instead of redundancy with Whyte and McFarland as only pure speed backs. Whyte could be a prime practice squad candidate if the Steelers are willing to test his market through waivers.

Smallwood, a former member of the Eagles and Washington Football Team, was a recent signing for the Steelers that made many heads perk up. As a veteran with experience, Smallwood would appear to have a shot at making this roster. With a hard time in Philadelphia, however, just how likely is Smallwood to see the field?

For one, he does not offer anything new. Samuels seems to do most of what Smallwood does, but better. Smallwood is a far more adept pass protector and has nice hands, but lacks lateral agility and consistent vision. Besides, he is very much a one-cut back that does not create a lot of yards for himself and lives off of the offensive line. The value with Smallwood is a purely special teams decision. He does have eight tackles and some return experience, but with a lackluster skillset, that may not be enough to push him onto the roster.

The brother of safety Terrell Edmunds, Trey Edmunds, is in between a rock and a hard place here for the Steelers. He has more speed than Smallwood and Samuels by a significant margin, but outside of one good NFL carry, he has not flashed much else but that speed and solid pass protection ability. There is not much upside as a receiver, and his vision is disappointing.

Edmunds is another player that will have to rely on special teams to find a way onto the 53-man roster. There is some experience there as an upback and on the kick return unit, but outside of that, he has an uphill climb.

Who wins the battle?

All it takes is a standout camp to wreck any of these preconceived notions. However, without a full training camp and an extremely streamlined offseason program in general, most teams will stay safe with their roster cuts and go with the reliable players. In the past few years, the Steelers have proven that they will get a little risky, though, and take the upside over the known commodity. For Kerrith Whyte, that could be good news.

With Samuels heading to the COVID list, this competition is wide open. I would have predicted that Samuels would win this battle and make the team before that, even if Whyte adds more upside with his speed and elusiveness. However, now, there is no guarantee. Whyte, Smallwood, and Edmunds will have more opportunities to make impressions while Samuels is out. Samuels still brings alluring stability, but with his current status and Whyte’s upside, this battle is up in the air. Regardless, I will bank on either Samuels or Whyte winning this one over Smallwood or Edmunds.