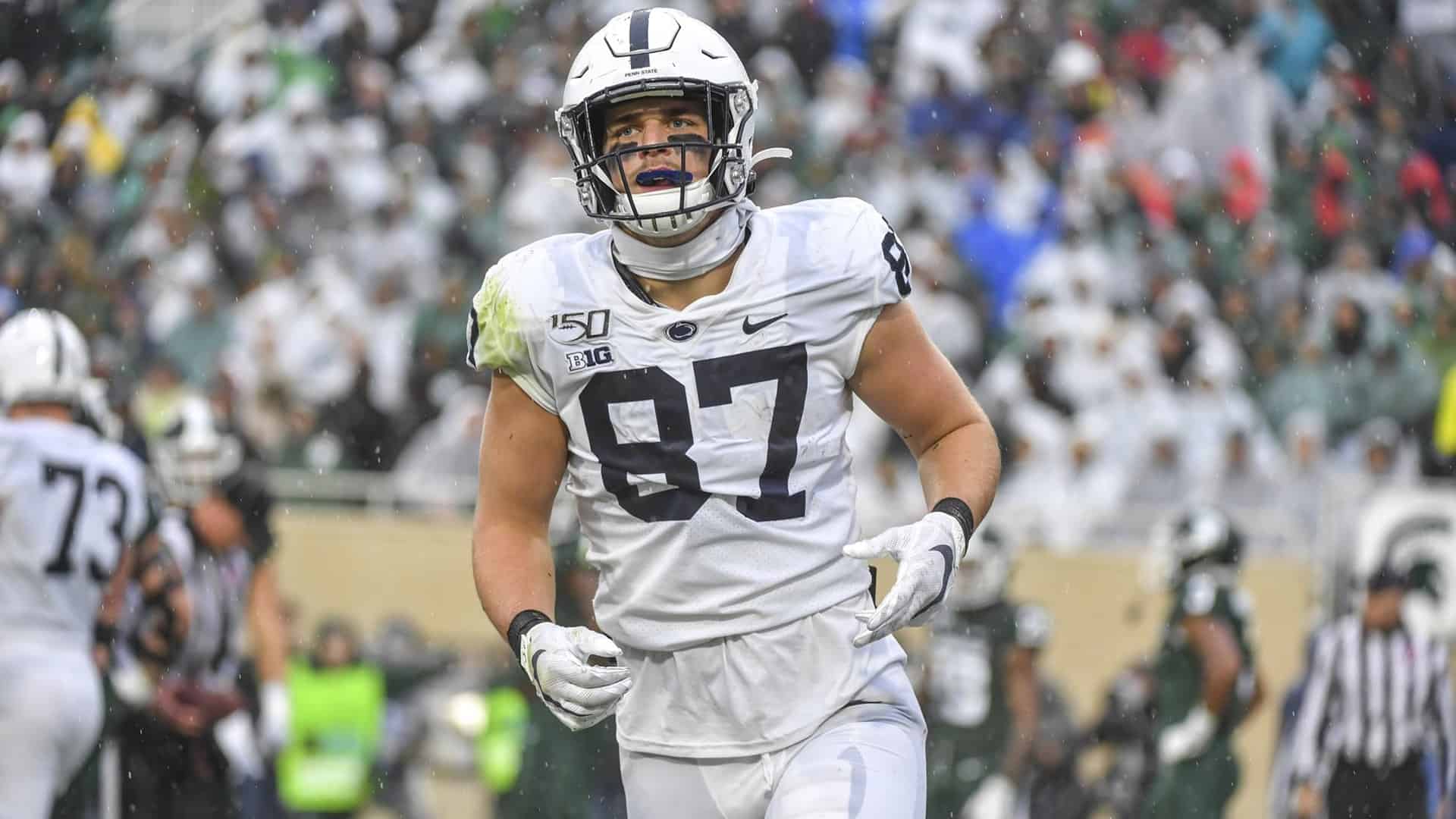 With the Big Ten Conference opting out of the fall 2020 college season due to concerns surrounding the current health situation, many prospects will be deprived of a final opportunity to showcase their talents to next-level evaluators. Penn State tight end Pat Freiermuth falls under a different category, however. Among the exclusive group of blue-chip talents that likely showed enough to cement their draft status, Freiermuth will shift his focus to preparing for the 2021 NFL Draft.

Heralded as a four-star recruit by three prominent recruiting outlets, and universally regarded as the second-best prospect in Massachusetts, Freiermuth elected to attend Penn State following a prolific career at the Brooks School.

Starting 13 games as a true freshman, Freiermuth managed 26 receptions for 368 yards and eight touchdowns. After establishing himself as a dynamic offensive weapon in the early goings, Freiermuth finished second on the team in receiving yards, behind only K.J. Hamler.

With Freiermuth, Hamler, and Miles Sanders leading the way, the Nittany Lions finished the 2018 campaign ranked 17th in the final AP poll.

While Sanders parlayed his breakout season into a promising career at the next level, Freiermuth and Hamler became the nucleus of Ricky Rahne’s offense.

The high-octane offense, which finished 15th in points per game (35.8), blended nicely with a fast-flowing defense led by Micah Parsons. The Nittany Lions ended the season with an 11-2 record and ranked ninth in the final AP poll.

As for Freiermuth, he again finished second of the team in receiving yards behind Hamler, reeling in 43 receptions for 507 yards and seven touchdowns. His signature performances included an eight-catch, 99-yard, two-touchdown effort against Buffalo and a seven-catch, 101-yard outing against the seventh-ranked Minnesota Gophers.

He earned second-team All-Big Ten recognition by the Associated Press, a second-team All-American nod by the Athletic, and was named the Nittany Lions’ Most Valuable Offensive Player.

For his career, Freiermuth is tied for ninth all-time in program history with 15 touchdown receptions and tied with Gesicki for most touchdown catches by a tight end.

Before the Big Ten declared an opt-out of the fall 2020 college football season, Freiermuth was prepared to embark on a potentially record-setting junior season. Even with the Big Ten’s season-long hiatus, the Penn State tight end is being unanimously lauded as a blue-chip prospect in the 2021 NFL Draft.

Without the luxury of a crystal ball, the battle for tight end supremacy in April will likely come down to Miami’s Brevin Jordan and Freiermuth. While both prospects possess explosive traits and limitless upside, my money is on the latter for earning that distinction.

As of this moment, Jordan and Florida tight end Kyle Pitts have a distinct advantage over Freiermuth, however, as the ACC and SEC are expected to participate in the 2020 season.

While having another year of film can certainly elevate their respective draft stocks, Freiermuth’s inherent athleticism, coupled with his massive frame, offers a unique skill set that sets him apart from his competitors. The Penn State product may experience a surge on draft night, similar to T.J. Hockenson in 2019.

With the trend of 12 personnel becoming increasingly prevalant around the NFL, teams are looking for every advantage when it comes to scheming up mismatches. The Kansas City Chiefs and San Francisco 49ers are the most recent examples of teams who value how a dynamic tight end can transform an offense, signing Travis Kelce and George Kittle to extensions last week.

In an NFL where the value of tight ends continues to skyrocket, Freiermuth only continues to garner more appeal as a do-it-all player at his position.

Pat Freiermuth’s receiving prowess, versatility, and red zone potential are the traits that make him a blue-chip NFL Draft prospect, but he doesn’t get enough credit as a blocker — an aspect that many young tight ends grapple with at the next level.

He may not be suiting up for the 2020 season, but Freiermuth figures to be a hot commodity throughout the pre-draft process.