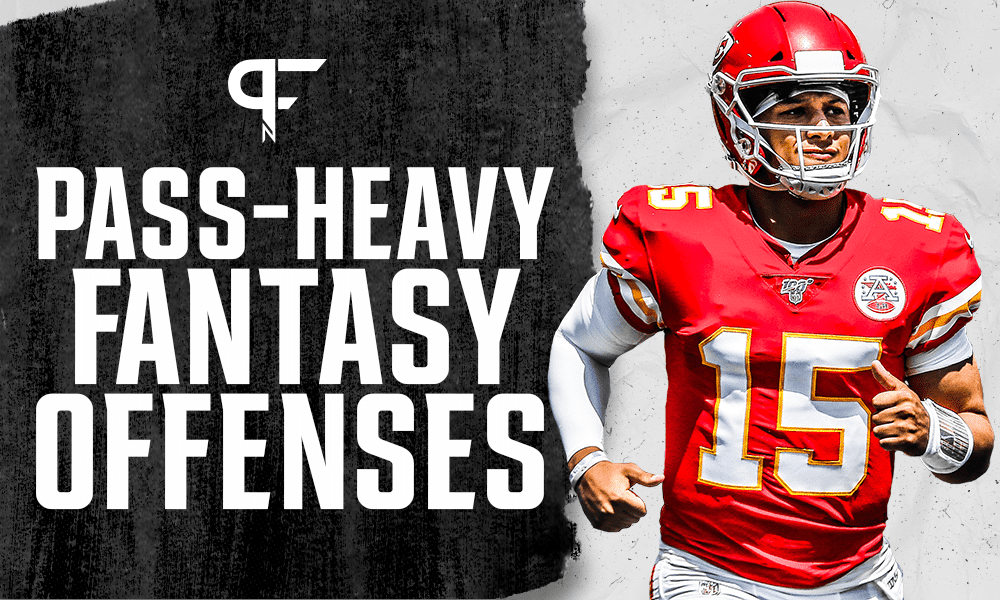 In 2021, it's a great strategy in fantasy football to prioritize quarterbacks and wide receivers from pass-heavy NFL offenses.

There are a limited number of pass-heavy NFL offenses each season that are capable of supporting multiple relevant wide receivers for fantasy football. This article will prioritize offenses with quarterbacks who are projected to exceed 600+ pass attempts in 2021.

Mecole Hardman will also emerge as a more reliable receiver for the Chiefs in 2021. This offseason, he continues to develop as a route runner, which could result in more structured targets rather than manufactured touches. Hardman caught 41 of 62 targets for 560 yards and 4 touchdowns last season. Furthermore, Mahomes had a 116.3 passer rating when targeting him.

The Chiefs are a pass-heavy NFL offense you’ll certainly want exposure to in 2021.

The Bills were one of the top offenses in the NFL last season. Buffalo (385.4) ranked fourth in total yards per game behind the Chiefs (414.7), Green Bay Packers (393.8), and Minnesota Vikings (393.2). Quarterback Josh Allen was an important catalyst for the team’s offensive success.

Prior to the Bills signing Emmanuel Sanders, Gabriel Davis was positioned for a breakout season. Davis played in all 16 games last year, starting in 11 of them. He finished as a WR3 or better in 81% of his games in PPR formats.

This will likely be Roethlisberger’s final NFL season. He has all three of his top receivers returning in 2021, with Diontae Johnson leading the group. He averaged 9.6 targets and 15 PPR fantasy points per game in 2020. As the Steelers WR1, he is projected to receive 140+ targets this season. Johnson’s drops are an area of his game that can be improved.

Roethlisberger and the Steelers are likely to be a more pass-heavy offense than you may think. The veteran quarterback may not have the arm strength he did earlier in his career, but all of his receivers are excellent at generating yards after the catch.

The Cowboys, Buccaneers, and Rams are the pass-heavy offenses from the NFC that bring a ton of value in fantasy football.

Dak Prescott averaged 50 pass attempts, 422.5 passing yards, and 36.3 fantasy points per game in his first four games last season. After his injury in Week 5, the Cowboys’ offense fell apart. The bulk of the quarterback snaps were taken by veteran Andy Dalton, and he only averaged 192 passing yards per game.

The Cowboys scored 31 or more points in four out of their first five games. However, after Prescott’s injury, they reached that mark just three times over the rest of the season. Prescott’s return elevates the entire Cowboys’ offense in 2021.

Receivers Amari Cooper, CeeDee Lamb, and Michael Gallup all have the potential in Dallas’ offense to exceed 100+ targets this season. Moreover, they will have to continue to lean heavily on the offense.

The Cowboys’ defense has made improvements this offseason but could still be tested in 2021. In addition to the other teams in the NFC East, they will also face the AFC West and the NFC South. As a reminder, the Cowboys’ defense allowed the ninth-most fantasy points per game to opposing offenses in 2020.

Cooper and Lamb are projected to each receive 125+ targets while Gallup will receive 100+ targets. In addition, tight ends Blake Jarwin and Dalton Schultz project to combine for around 100 targets.

Thus, it’s easy to see that the Cowboys are another high-powered pass-heavy NFL offense you’ll want to target this season.

Receiver Mike Evans has now accumulated seven consecutive seasons with 1,000 or more receiving yards. He’s finished as a WR2 or better in 52% of his 106 career games. Chris Godwin, meanwhile, has averaged 8 targets, 83.6 receiving yards, and 18 PPR fantasy points per game over the last two years. This dynamic duo should pick up where they left off last season as they each project to receive 120+ targets.

Furthermore, the Buccaneers have veteran receiver Antonio Brown — who projects for 90+ targets — and tight ends Rob Gronkowski and O.J. Howard on the roster.

The return of Howard hurts Gronkowski as he was outperforming Gronkowski before his season-ending injury. Howard’s 146 receiving yards from Weeks 1-4 were the most by any tight end and third-most on the team behind receivers Evans and Scotty Miller. Howard scored 2 touchdowns in those four games, joining Evans as the only Buccaneers with multiple touchdown receptions during that time frame. As a result, Howard finished as a TE1 in two of those four games.

The addition of veteran quarterback Matthew Stafford to the Rams is one of my top signings of the offseason. Head coach Sean McVay finally has a quarterback who can make any throw on the football field and maximize his offensive scheme.

With the receiving weapons Stafford will have in Los Angeles, it’s possible he has a career season. Robert Woods and Cooper Kupp have prospered over the last three seasons catching passes from Jared Goff. Since 2018, Woods has finished as a WR2+ in 51% of his games. Kupp, on the other hand, has finished as a WR2+ in 41% of games. Both players may receive 130+ targets each in 2021.

Stafford has no problem throwing the football deep, and this will mesh well with play-action, which McVay features heavily in his offensive scheme.

Receivers DeSean Jackson and Van Jefferson will combine for around 100 targets. At this stage of his career, Jackson can be viewed as more of a situational deep threat. Meanwhile, Tyler Higbee should see around 70 targets.

Goff’s passing air yards per game dropped dramatically over the last two seasons. This negatively impacted Woods and Kupp’s statistical production. However, both are in a position to greatly exceed expectations in 2021 in the Rams pass-heavy offense.