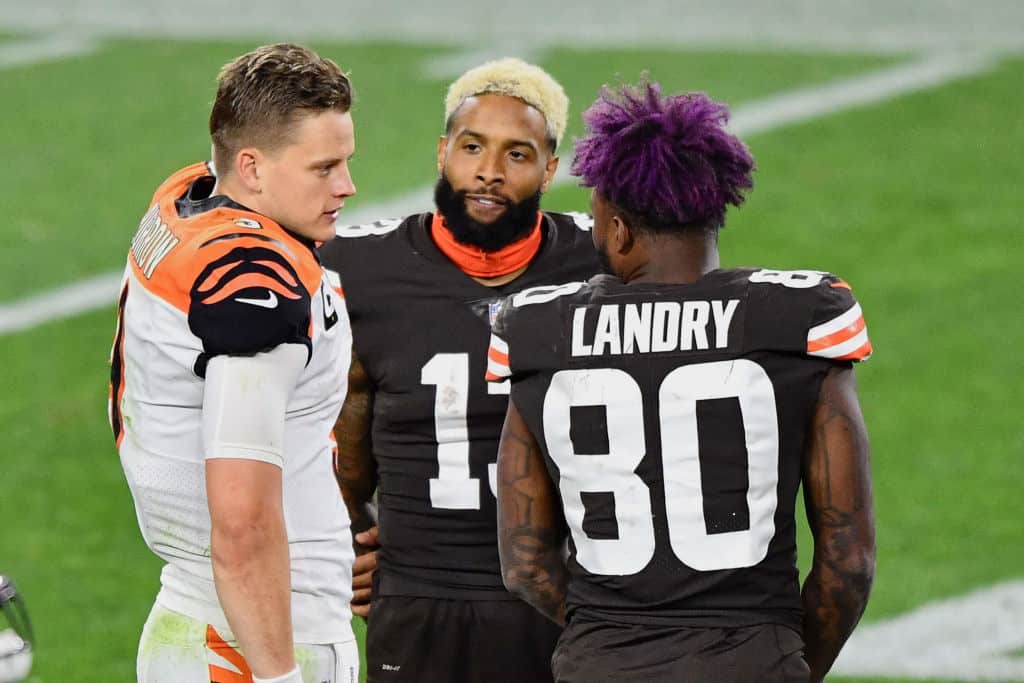 CLEVELAND, OH - SEPTEMBER 17: Joe Burrow #9 of the Cincinnati Bengals, left, talks with Odell Beckham Jr. #13 of the Cleveland Browns, middle, and Jarvis Landry #80 of the Cleveland Browns after their game at FirstEnergy Stadium on September 17, 2020 in Cleveland, Ohio. (Photo by Jamie Sabau/Getty Images)
What's in this article? Click to show
NFL Week 7 Over/Under Best Bet: Browns vs. Bengals O 50 | -110
The Browns defense is struggling mightily
Bets from other analysts

It is Week 7 of the NFL season, and, once again, the Pro Football Network betting team is back to give you all the best insight and picks to increase your bankroll. This article will dive into the best over/under bets from the team for Week 7 following a best bet winner in Week 6 with the Patriots vs. Broncos under. We will look to continue our success with a winner for our NFL Week 7 over/under best bet. Bookmark the PFN betting team for all of our completely free content to help you cash during the 2020 NFL season.

One of the first rematches of the 2020 NFL season is the battle for Ohio part two, with the first meeting resulting in a 35-30 win for Cleveland. The 65 point outburst was a cause of both offenses strengths lining up perfectly with the opposing defense’s weaknesses.

Both offenses moved the ball at will, and with no serious injuries or personnel changes for either team that would be detrimental to scoring, I see no reason why part two should not be a high scoring affair as well.

Despite the loss of running back Nick Chubb, the Browns’ dominant run game has continued to run the ball with great success because of their great offensive line. This unit ranks second in the NFL in adjusted line yards with 4.91 and has been the driving force behind this Cleveland offense that averages a league-best 169.5 yards on the ground per game.

With how dominant this line has been, who actually runs the ball has become somewhat insignificant. However, it doesn’t hurt that the Browns have the most skilled back-up running back in the league in Kareem Hunt.

Hunt’s career looks completely revitalized in Cleveland, and I expect him to rumble early and often vs. these Bengals that allowed him to rush for 8.6 yards per carry in their first meeting.

Yes, the Browns have questions under center following a Week 6 bout with the Steelers where Kevin Stefanski removed Baker Mayfield due to injury in a blowout that the Browns were on the wrong side of. The expectation is that he will play in Week 7 despite a questionable tag, but regardless, I expect this game to be an easy one for whoever lines up at quarterback.

Just exist long enough to hand the ball off, and if the Bengals decide to load up the box, throw it to one of your dynamic playmakers on the outside that will beat one on one coverage all day.

The Browns defense is struggling mightily

This Browns defense is littered with talented players, but for whatever reason, they have not found a lot of production in 2020. They have had plenty of injuries if we are looking to make excuses, but it does not look like they will get many of these impact players back for Week 7, except potentially Karl Joseph. They are allowing 365.7 yards per game on the year, good for just 19th in the NFL.

What is more worrisome is the Cleveland pass defense that has allowed teams to throw all over them every week. They are allowing 272.8 yards per game this year, ranked 27th in the NFL, and this injury-riddled secondary will need help from the pass rush if they hope to improve moving forward because they can’t guard anyone at the moment.

In Week 2, this secondary allowed Joe Burrow to throw for 316 yards, and now that the rookie has five more games under his belt and this Browns passing defense has gotten statistically worse, I expect him to get to or exceed this yardage mark on Sunday.

For the past four years, this Bengals offense has been anemic, not ranking greater than 17th in points any season. However, Joe Burrow has served as the catalyst that this offense desperately needed to break out from the cellar of the league’s worst offenses.

While the Bengals still have issues on the offensive line, the ability at the skill positions for this Bengals offense is undeniable. Bell cow running back Joe Mixon has begun living up to the hype, and the wide receiver group is loaded with talent with names like Tyler Boyd, Tee Higgins, and A.J. Green.

This wide receiver group, in particular, should feast on a Browns secondary that lacks skill and is riddled with injuries. No one could guard Tyler Boyd in their Week 2 matchup, who caught seven of his eight targets for 72 yards and a touchdown, and I expect him to be an even larger part of the offense on Sunday.

The X factor for hitting this NFL Week 7 over/under bet is the Bengals offensive line that has been hard to trust in 2020 protecting Burrow, but I expect them to double Myles Garret and make someone else beat them. I am hopeful that this is a recipe for success.

The Bengals defense is who we thought they were

For the past few years, the Bengals rush defense has been gashed week in and week out regardless of opponent. This narrative has continued in 2020 as the Bengals defense has allowed 142.3 yards per game on the ground thus far, 27th in the NFL. This creates a serious mismatch with the Browns’ league-best rushing offense, and we saw how they exploited this in Week 2 for 215 yards and three touchdowns.

The Bengals know they can not rely on their defense to win games, particularly this game, where their weaknesses will undoubtedly be exploited. They need to score often if they hope to keep up this Sunday.

The Browns vs. Bengals in Week 2 started slow, with only three total points until 1:55 left in the first quarter, and still ended with 65 total points. Do not overthink it; grab this total before it gets even higher.

Bets from other analysts

The previous meeting in Week 2 between these two was well over this total. Even though Chubb is out injured and Cincinnati’s offense has been inconsistent since that game, they scored plenty in nearly upsetting Indianapolis last week.

Arizona’s offense is back on track after lighting up the Cowboys on Monday night, and the Seahawks defense isn’t that much better than Dallas. No one has contained Russell Wilson this year, and the Cardinals don’t have enough horses within the front seven to do it either.

I could almost repeat what I wrote last week. Joe Flacco starting at quarterback hasn’t helped, and the Bills will be a bit desperate after two consecutive defeats where their defense wasn’t up to par.