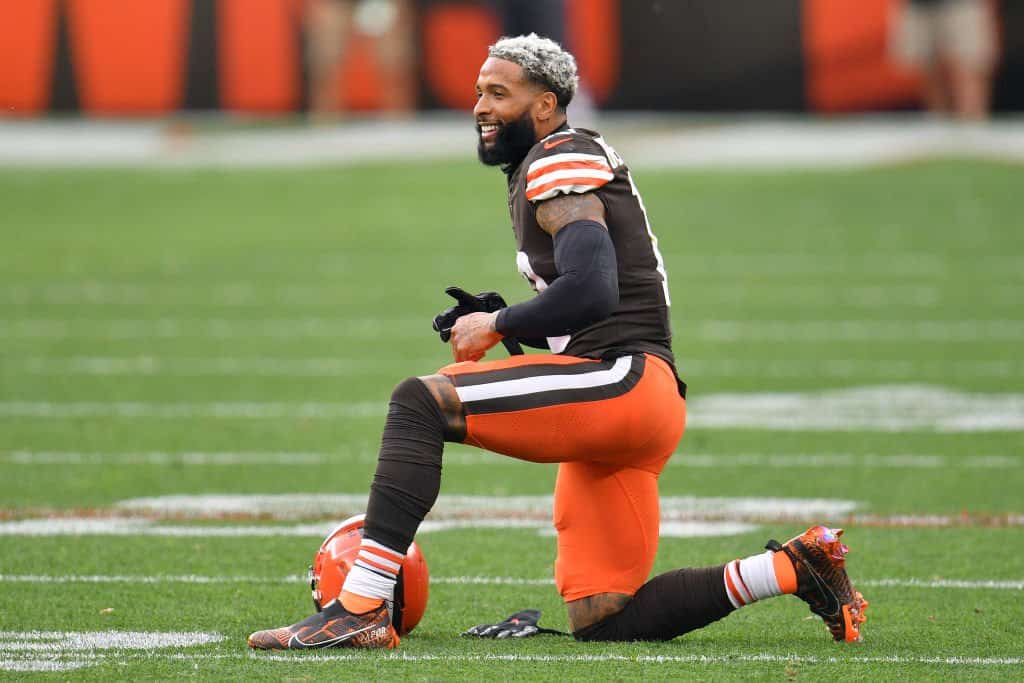 The world first bore witness to Cleveland Browns wide receiver Odell Beckham Jr.’s greatness on November 23, 2014, when Beckham, then a rookie from LSU and a member of the New York Giants, made one of the greatest catches in NFL history. That catch was presumably a precursor of what was to come for Beckham, and at first, that assumption held true: In his first three seasons, Beckham averaged 96 catches, 1,374 yards, and 12 touchdowns. Since then, however, Beckham has trailed off, and less than a week ago, it was confirmed by Ian Rapoport of NFL Network that Beckham had torn his ACL and would be out for the rest of 2020. Odell Beckham Jr.’s injury undoubtedly clouds his future, but what kind of implications might it have for his outlook in fantasy football and dynasty leagues? Will another Odell Beckham Jr. trade be in the cards?

Odell Beckham Jr. kicked off his NFL career with one of the most productive initial three-year stretches in NFL history, and his early success was reflected in his performance in fantasy and dynasty leagues. He finished the 2014 season as the fifth-ranked fantasy wideout, despite playing only 12 games — averaging a whopping 17 fantasy points per game. In 2015, he again rounded out the top five, and in 2016, he moved up a spot to fourth, behind only Mike Evans, Jordy Nelson, and Antonio Brown.

At the conclusion of the 2016 season, Beckham was just 24 years old, and he seemed to be at the mere beginning of a potentially Hall of Fame-worthy career. But the tides would soon change for New York’s star wideout.

Beckham played just four games in 2017, missing most of the season with an ankle injury. The next season, he missed four games and logged 1,052 yards and six touchdowns on 77 catches. The Giants, having gone 8-24 in those two campaigns, chose to trade Beckham to the Browns in the 2019 offseason. There, Beckham was expected to help expedite the rise of second-year quarterback Baker Mayfield, but instead, the offense regressed under one-and-done head coach Freddie Kitchens.

Beckham’s career with the Browns

While Beckham broke the 1,000-yard threshold in both the 2018 and 2019 seasons, his regression from a fantasy standpoint was very noticeable. After starting out his career as a perennial top-five wideout, Beckham came in at just 16th in 2018. In 2019, a dramatic surge of young talent sent him down even further, all the way to 31st, on par with supplementary weapons such as Jamison Crowder, Cole Beasley, and Emmanuel Sanders.

While he showed modest improvements early on in 2020 with new head coach Kevin Stefanski, Beckham was still comfortably outside the top 10 in total fantasy points and outside the top twenty in average fantasy points per game among NFL wide receivers. He was still being targeted at a consistent clip, but there were times when he and Mayfield clearly weren’t on the same page. Targets weren’t always funneled Beckham’s way, the same way they were with Eli Manning and the Giants.

Could an Odell Beckham Jr. trade from the Cleveland Browns be possible?

Odell Beckham Jr. will still be under contract with the Cleveland Browns in 2021; in fact, his current deal doesn’t run out until 2023. But there’s a sense that an Odell Beckham Jr. trade could be possible, and that’s a sentiment that NFL insider Ian Rapoport reinforced in his reporting on Beckham’s injury. As Rapoport stated: “There is a very real possibility that [Beckham] has played his last game with the Cleveland Browns.”

According to Rapoport, Beckham won’t be healthy at the start of the league year, when approximately $12.791 million of his 2021 salary becomes guaranteed. So the Browns can’t ship him in March when teams begin the reshuffling process. At the same time, however, it’s not in their best interests to outright cut him and take on that dead cap figure without any corresponding asset infusion.

Now, in a vacuum, it appears as though the Browns could simply keep Beckham; he’s a talented player at a position of modest need. However, as Rapoport elaborates, the context doesn’t bode well for that scenario. Rapoport made clear that Beckham hasn’t taken to Cleveland since arriving there in 2019, and he hasn’t developed a particularly strong rapport with Mayfield, either. In what might not have been a total coincidence, Mayfield exploded for five touchdowns and an epic comeback victory after Beckham left the field in Week 7 against the Cincinnati Bengals.

Simply put, Beckham’s lack of chemistry with the rest of the offense, and Mayfield’s lacking chemistry with Beckham, may have been hurting the cohesiveness of the unit overall. In a silo, Beckham is still a supreme talent with the athleticism and nuance to be a premier threat. But sometimes it’s as simple as finding the right match, and it seems as though Cleveland hasn’t been his match, even with head coach Kevin Stefanski making strides.

Where could Beckham end up?

This conversation begs a more pressing question: What is the right match for Beckham? Does he need to be the offense’s premier threat to achieve maximum production? Can he find the right match while being diluted by other weapons? And if the answer is “no,” what exactly is the cut-off point for Beckham himself? Provided he returns to full health, plenty of teams could use Beckham’s athleticism and rare receiving talent. But moving to a non-contender doesn’t seem to be a preferable option for him, especially after spending his first seven seasons with those types of teams.

Related | When is the fantasy football trade deadline on different platforms?

Franchises such as the Miami Dolphins, Baltimore Ravens, Denver Broncos, Philadelphia Eagles, Green Bay Packers, New Orleans Saints, and San Francisco 49ers provide the mix of overall contention and individual opportunity that Beckham will likely prefer, but whoever trades for him also has to be able to feasibly take on his $12 million-plus in cap allowances.

Taking a look at 2021 cap projections, the Saints, Eagles, Packers, and 49ers all come in a bit too thin to account for Beckham. Thus, from a pure conceptual standpoint, teams like the Dolphins, Ravens, and Broncos could end up being the best potential fits.

What is Odell Beckham Jr.’s fantasy and dynasty outlook in 2020 and beyond?

So to sum up everything that’s been written thus far in a succinct, somewhat blunt manner: No one knows what’s happening with Odell Beckham Jr. We know there’s a distinct chance that he’ll be offloaded from Cleveland once he’s healthy, presumably in the summer of 2021, but beyond that, the details get hazy. And while we can theorize about potential suitors, it’s not a guarantee that he gets a wave of interest coming his way.

Beckham is bound to get some interest, given his caliber of player, but there are multiple serious questions facing the wideout in 2021 — questions that could turn tangible league-wide interest into more of a tepid curiosity, especially given his price tag. Can Odell Beckham Jr. return to form after suffering an ACL tear in his left knee? And even if he does, can he find the right fit? After seeing how much the wrong fit impacted him in Cleveland, it’s worth wondering if he’ll ever again find the perfect marriage of opportunity and chemistry he found in New York.

At this point, we know NFL decision-makers will be wrestling with this dilemma well beyond the start of the new league year. But how will you, the ambitious fantasy football manager, handle the Odell Beckham Jr. situation? Let’s get into that.

In redraft fantasy leagues and dynasty leagues, the verdict is about the same for me: Keep an eye a possible Odell Beckham Jr. trade, and watch where he goes and how he progresses, but don’t rely on him as a primary option. Beckham is still an elite athlete without a doubt — too many forget his elite explosiveness and agility numbers from the 2014 NFL Combine. As long as he doesn’t suffer any complications along his recovery timeline, he should be able to get back near one-hundred percent. Other top-tier wide receivers have done it before, most notably Keenan Allen and Allen Robinson.

With that being said, Beckham Jr. will be 29 years old by this time next year, and there’s still the withstanding question regarding where he ends up, whether it will be the right fit, and whether he’ll have the trust and chemistry with his new offense to warrant a premier role right away. Considering how deep the wide receiver position is in the NFL right now, and considering how good the 2021 NFL Draft’s wide receiver class is expected to be, there are bound to be other fantasy options besides Beckham who offer more upside, and in dynasty leagues, more long-term potential.

If you already have Odell Beckham Jr. in your dynasty league and you’re wondering what you should do with him, or if you’re pondering a reunion, I wouldn’t get too attached. As mentioned above, there are lots of questions surrounding Beckham’s future and even more contingency plans at wide receiver. With that said, stay dialed in with his situation, because if all systems are go health-wise, and Odell Beckham Jr. is traded to a team with an ascending passer and an open role on offense, such as the Dolphins, Broncos, or Ravens, he could be an exciting buy-low candidate.

In this article:Odell Beckham Jr.