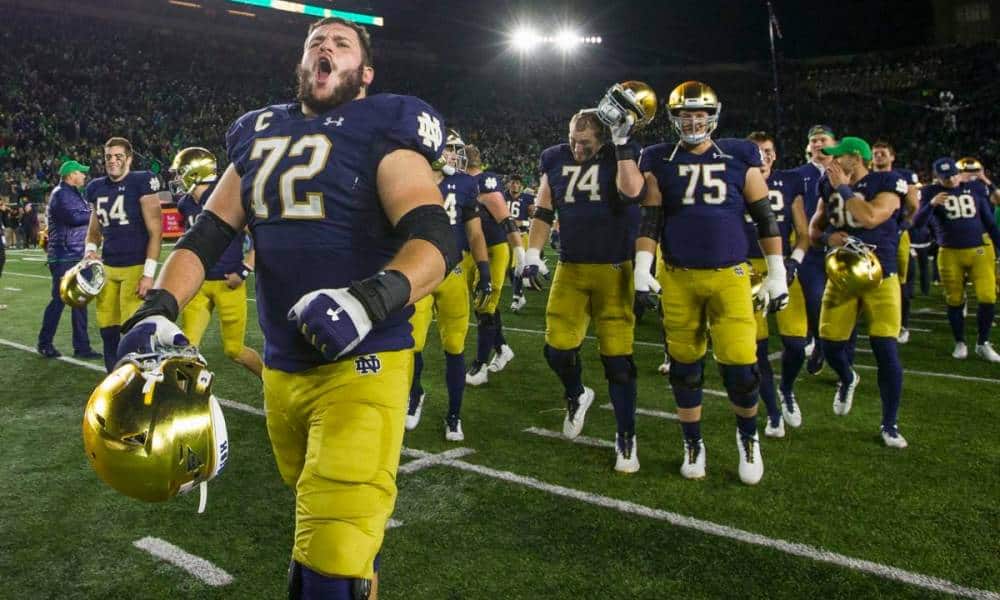 Notre Dame right tackle Robert Hainsey (72) and the offensive line were riding high after paving the way for 311 rushing yards against USC on Oct. 12. 5eae55b95e820 Image

Notre Dame has been one of the nation’s best at producing quality NFL offensive linemen over the last several years. From first-round selections Quenton Nelson and Zach Martin to lower-drafted prospects like Nick Martin and John Sullivan, all of these guys are or were among the best at their positions in the NFL. Once again, Notre Dame has two offensive tackles that look to continue this trend of successful NFL starters: Liam Eichenberg and Robert Hainsey.

Eichenberg and Hainsey are both experienced starters, combining for 48 starts between the two of them. Experience is always a good thing for offensive linemen, and it shows in their tape. Eichenberg and Hainsey played close to 750 passing snaps together and only allowed five QB hits with zero sacks given up.

While those metrics can be nit-picky and not always 100%, the bottom line is these two were efficient when it came to protecting the quarterback-something that becomes increasingly more valuable each year it seems.

What Liam Eichenberg brings to the table

Eichenberg came to Notre Dame a much-ballyhooed recruit in the 2016 class. Eichenberg was a four-star OT from Ohio who ended up choosing Notre Dame over the likes of Ohio State, Michigan, and Penn State. Eichenberg participated in the 2016 Under Armour All-American Bowl game, where he participated against other top recruits, including Nick Bosa, Ed Oliver, McTelvin Agim, Keyshon Camp, and Oluwole Betiku. He earned a name for himself there.

Eichenberg had to wait until the 2018 season before he got his starting shot, sitting behind eventual top-10 pick Mike McGlinchey for two seasons. Eichenberg started the season rough but improved significantly as the season went on. He didn’t allow a single sack and gave up just one hit on the quarterback in the final eight games of that season, including the Cotton Bowl game against Clemson.

Eichenberg carried the momentum from 2018 into the 2019 season. Eichenberg did not allow a single sack all season long and held up well against top pass-rushers like Kwity Paye, Aidan Hutchinson, Chris Rumph, Victor Dimukeje, and Drake Jackson. Pedigree and top competition have helped the Notre Dame offensive tackle develop as a pass protector, and that shows on tape.

Eichenberg demonstrated a balanced and patient set as a pass blocker. He’s about as clean from a stance and footwork perspective as one would expect from a Notre Dame offensive tackle, showing off good quickness and cadence, and a comfortable familiarity deploying different sets.

His first steps are quick, controlled, and balanced. Eichenberg routinely identifies and handles stunts and blitzes against the top defenses, demonstrating the IQ of a seasoned veteran that will only improve with more experience.

The physical traits with Eichenberg are NFL-caliber as well, but closer to average compared to other recent top offensive tackles. Eichenberg stands at 6-foot-6, 305 pounds with adequate arm length. When Eichenberg hits his strikes, he generates a jolting amount of power, creating leverage against the defender. His hands lock-in and move defenders.

While a minor point, I like how effective and efficient Eichenberg is as a combo blocker, often teaming up with guard Aaron Banks to take down defenders and clear the road for big plays. Notre Dame offensive tackles have been great at these combo blocks as long as I’ve been scouting, so it’s nice to see that tradition continuing.

Eichenberg moves well in space and does an excellent job of keeping his feet controlled to engage defenders in space. There were numerous screens that flowed towards Eichenberg’s side, and he sealed linebackers and defensive backs on the move. He understands angles in space and rarely lunges or over-extends when trying to hit his target.

There are a couple of glaring points in Eichenberg’s game that will impact his NFL Draft stock. His hand placement and overall strike timing will need to improve. Obviously, this can be ironed out with development. There were numerous reps where Eichenberg either misplaced his strikes or was late with his hands, allowing the defender to gain leverage on him and drive him.

With some hip stiffness already in Eichenberg’s game, his tendency of having his feet and hands out-of-sync has to improve to generate NFL-caliber leverage. I believe this played a part in the number of false starts Eichenberg had this season, as he “cheated” a few times to get ahead.

Eichenberg is a good, not great athlete. After watching the likes of Tristan Wirfs, Mekhi Becton, and Jedrick Wills, it’s understandable that many scouts might have been disappointed by Eichenberg’s closer-to-average athletic traits. He doesn’t possess the smoothest lower half, and his lateral ability against explosive edge rushers suffers because of it.

However, this is a gap that can be closed by improving technique and fundamentals (see tackles like Taylor Decker and Jonah Williams). As Eichenberg develops his consistency on a down-to-down basis, the mistakes will get cut down, and his stock will soar.

I see a lot of similarities to 2016 first-round pick Taylor Decker. While not as brutally power as Decker was out of college, there are a lot of physical similarities between the two. Decker developed into a top-tier pass protector by improving his technique tremendously in his final year.

Every Notre Dame left tackle under Brian Kelly has been a first-round pick. If Eichenberg continues his development trajectory, he very well could end up next in line. Fellow PFN draft analyst Matt Valdovinos ranked Eichenberg as his ninth-overall tackle in the 2020 draft class, though that’s certainly subject to change, likely to Eichenberg’s benefit.

As of right now, I would class Eichenberg as a late Round 1-mid Day 2 pick. The 2021 tackle class doesn’t possess a ton of top talent outside of Sewell, so the position will be inflated out of need, which will help Eichenberg out in the draft process. He has plenty of tools to work with and is developed enough that he could start early at an NFL level. If Eichenberg has that development this season, there’s no reason he shouldn’t be selected in the first-round.

Robert Hainsey is just as impressive

Hainsey was also a four-star recruit in the 2017 recruiting class out of IMG Academy. Notre Dame beat out the likes of Auburn, Georgia, LSU, Ohio State, and hometown Miami to secure Hainsey. Like Eichenberg the year before, Hainsey competed in the Under Armour All-American Game, where he squared off against players like Marvin Wilson, K’Lavon Chaisson, Kwity Paye, and Tyler Shelvin.

Hainsey played right away for Notre Dame, earning significant playing time as a freshman. Hainsey hasn’t looked back since, starting his next 22 games. His 2019 season was cut short midway through with a leg injury against Virginia Tech, but Hainsey was on his way to a career year beforehand. Hainsey’s impact was so great that he was named the Notre Dame Offensive Lineman of the Year despite missing several games.

Like Eichenberg, Hainsey is a well-developed pass protector. His foot speed is excellent, rarely getting beat around the edge. He demonstrated much of the same prowess in pass protection that Eichenberg did, but there are a few notable differences between the two that make them an interesting dynamic duo at tackle.

Hainsey does a better job of timing his hands in pass protection, but he isn’t as balanced and controlled as Eichenberg with his footwork. This is, like Eichenberg’s use of hands, a fundamental point of technique that can be developed and improved with coaching.

Hainsey doesn’t suffer from the lower stiffness that Eichenberg does. He displays a fluidity that mirrors the best pass-rushers he lines up against. Of the two, Hainsey is the superior athlete. He is also the nastier of the two in the running game, finishing with some edge and getting under the skin of defenders more than a few times. While Hainsey doesn’t possess the agility of a Wills or the sheer athleticism of Wirfs, he is still a gifted athlete in his own right.

The most common criticism of Hainsey has been his build. At 6-foot-4, 295 pounds, many have cited concerns about his lack of size and length on the outside at the NFL level. There are a few times where this pops up on tape, but they are rare enough that it isn’t a frequent issue. The lack of length has caused a few analysts to remark that Hainsey should move to guard at the next level, but as the mantra goes, “Keep Good Tackles at Tackle”.

Hainsey does need to continue to build and develop strength, however. Unlike Eichenberg, Hainsey is often more of a positional blocker instead of a mauler. I’d like to see him get better at channeling his lower half into those down blocks and get better at washing defensive linemen. He fits right at home in a zone-blocking scheme.

Projecting Hainsey as an NFL Draft prospect is tricky, as his position will depend on each team’s process. It’s more likely in my eyes that he’s projected as a guard at the NFL level, despite his success as a tackle. Right now, Hainsey is a Day 2 prospect that is fully capable of starting early on in his NFL career. If he takes that next step physically, I’d expect Hainsey to garner first-round consideration, but due to the incredible talent at the guard spot in the 2021 class, it’s safer to assume Hainsey ends up being selected at some point on Day 2 of the 2021 NFL Draft.

Notre Dame has had a phenomenal run of producing NFL offensive linemen. Eichenberg and Hainsey are outstanding prospects in their own rights, but guards Aaron Banks and Tommy Kraemer, as well as center Jarrett Patterson, are all draftable players. With the amount of experience and talent returning to the Irish in 2020, I fully expect Notre Dame to be in the running for the Joe Moore Award.