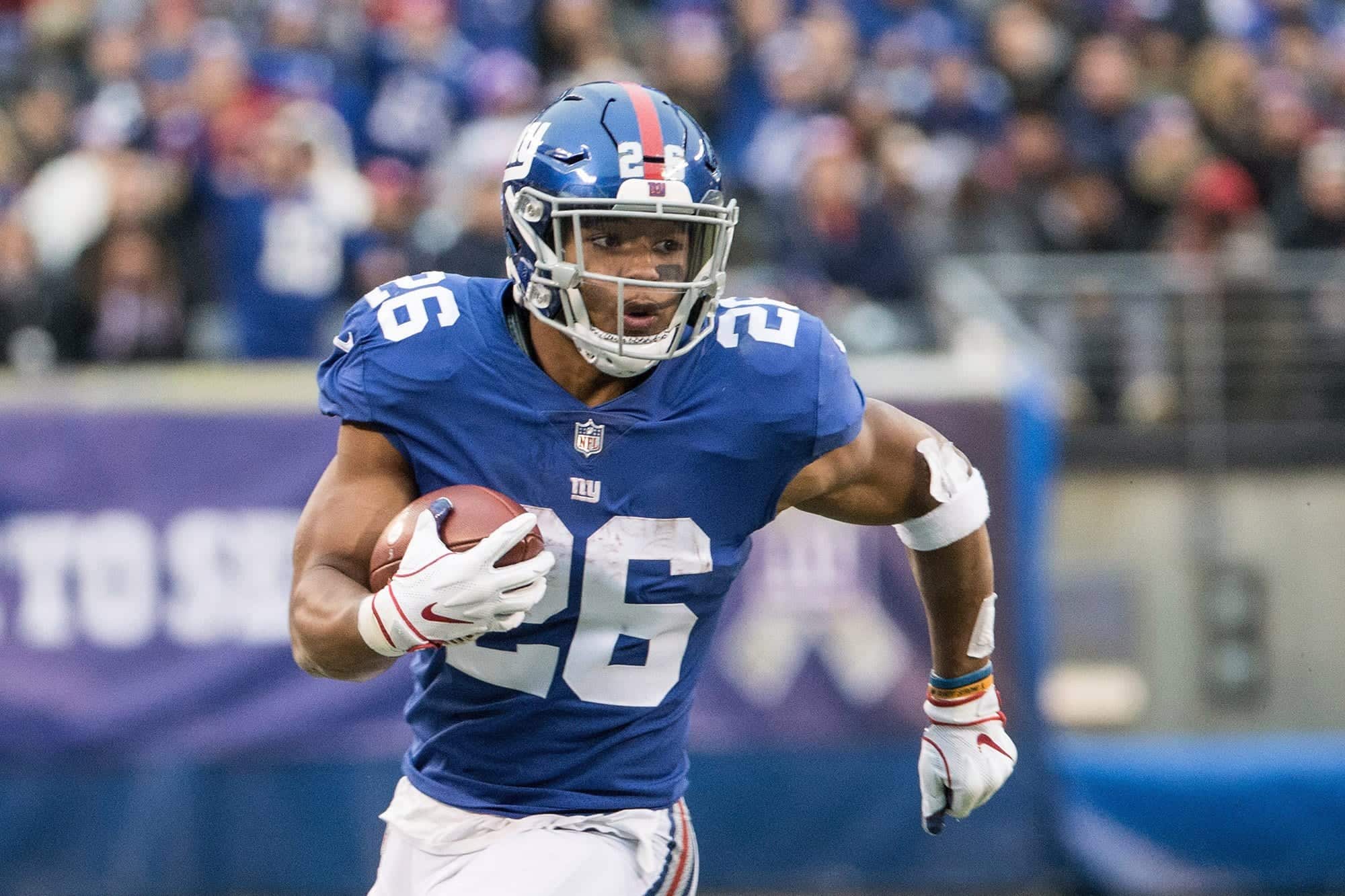 Photo Credit: New York Post
What's in this article? Click to show
Against The Spread Player Prop of the Week
PSU alum Barkley to roar against those other Lions
Circle of Life….and Trust
Gurley Gets Going
Music City Match-up
Jones’ing for more Jones

As we head into the Week 8 NFL player props picks, we near the halfway mark on the season, and it is time to analyze the success rate of the betting efforts of over/under yardage plays.

Pro Football Network’s gambling group, Against the Spread specifically, has seen plenty of success as a whole, yet the last week or so has not been very kind to anyone placing wagers or bets on games and player props alike.

Heading into last week’s Monday Night Football game with the Patriots and Jets, this weekly series was a solid 22-20 with over four units of profitability. Unfortunately, a triple-headed stinker on Monday left the seasonal record below .500 for the first time all year heading into a week of wagering.

Like any football team does at halftime, it is time to analyze the pros and cons and what is working and what is not from the first half. Having done that on the wagering of player props, a few things have become crystal clear.

Over the 45 player prop bets placed since Week 1, the most success has come from two specific areas of wagering.

When playing rushing yard over player props, there is a success rate of 75% at 9-3.

When placing bets on the receiving yard player prop, there is an equally enjoyable 70% success rate at 7-3.

When playing a player prop in a combined yardage wager, the record stands at 2-3.

So with dealing in running back and receiving yardage-based plays, this series is standing at an impressive 18-9.

Conversely, there have been some trouble areas. The quarterback plays have not been kind in terms of passing yard and passing TD player props. When betting on the quarterback alone, the record is an unsavory 1-6. This has become “stay-away” territory.

When diving into the more lucrative arena of anytime touchdown scorers, the difficulty in hitting, of course, becomes higher. A hit on an obscure scorer could balance your profit margin despite the record, but at 2-4 on the year, this is a player prop where confidence is lacking at the moment.

So what does one do in the second half? You adjust and stick to your strengths while avoiding your weaknesses.

Having said that, we will now look at running backs and receivers who can get us back over the hump and on to a familiar seasonal winning record.

Against The Spread Player Prop of the Week

PSU alum Barkley to roar against those other Lions

Saquon Barkley is an athletic freak and a Lion of another shade of blue. Last week he returned from an injury and had a lackluster performance against Arizona. But facing a soft Lions rushing defense today, look for Barkley to destroy a low 78.5 over/under rushing yard total.

The Lions give up 139.2 yards on the ground per game, which is fifth-most in the league. Barkley is a beast of a runner who will undoubtedly be utilized plenty as he is the clear centerpiece of the Giants offense.

Granted, the injury from earlier in the year may be the reason this over/under mark is set lower than 80 yards, yet the odds are very tolerable at -112.

This is a safe double-down play as the Player Prop Play-of-the-Week for Week 8.

Staying in this game and bringing things full circle…of life, Lions rookie T.J. Hockenson made the curious choice upon his drafting to claim he is a huge fan of Disney’s The Lion King. I am not one to judge movie tastes, but mine is a bit more in the Meet the Parents genre.

The rookie from recent Tight End U (Iowa) had a blistering day with 6 catches 131 yards and a score to open the season in Week 1.

Since then, like a Focker, he left my Circle of Trust.

However, the Giants are a team that has not stopped the pass as a whole, giving up 257.0 yards in the air a game, which is in the bottom ten in the league. Without a viable rushing attack due to Kerryon Johnson’s injury, Matthew Stafford may need to rely more on his tight end on short routes, check down situations, and middle of the field dump-offs.

Hockenson has averaged 4.5 targets over his first six games in the league with five last week and six the week prior. He is not void of looks and chances.

Combine this with the personnel that is missing on the rushing side and an opponent with a bottom-third pass defense, Hockenson could make his over of 37.5 yards at virtually even money odds of -102 a first quarter win.

I have a feeling, like Ben Stiller, Hockenson will earn his way back into my Circle of Trust, but I don’t want to “Mr. Jinx” it.

See what I did there?

Saved by a pair of games with a couple of scores, Todd Gurley has been underwhelming this season thus far for his fantasy owners. He has eclipsed 60 yards just twice, but a remedy for that is the league’s worst rush defense in the Cincinnati Bengals.

The winless hosts have given up a staggering 189.0 rushing yards a game, and should Gurley produce half of that total, he will be way over his mark of 80.5 set by FanDuel.com, as all of these NFL odds and player props are. With another palatable cost at -112, this atrocious defense in tank-mode should lead to a vintage Gurley performance.

Regardless of his 3.8 yards-per-carry average so far in 2019, Gurley is going up against a unit that allows a whopping 5.2 yards-per-carry. If ever there was a game where he can get his 100+ yard rushing performance with his current usage pattern, the Bengals could be his daily fantasy explosion.

Don’t be the one to miss the fireworks display and get burned on not playing this Week 8 player prop.

It is now Ryan Tannehill’s official time to take the lead chair in the Music City and make this offense sing. The harmony so far with wide-receiver Corey Davis is smooth as a good jazz riff. Since Tannehill took over for Marcus Mariota, he has targeted Davis 12 times for 9 catches 116 yards and a score.

With a disrespectful Week 8 over/under mark of 56.5 against the Tampa Bay defense, both Tannehill and Davis should be insulted. The Buccaneers give up a league-worst 304.5 passing yards a game.

This stat is music to number 17’s ears, and the symphony could be sweet on Sunday. This game could be a rock orchestra of yards and points, and I see Davis crushing this number by halftime, if not a series or two.

Aaron Jones truthers, can you hear me? They are out in full-force recently with a couple of dominant fantasy performances under his belt. Although in a mix of ways, Jones has put up five viable fantasy performances including his 182 total yards and four touchdown splurge in Dallas and a 116-yard ground game back in Week 2 against the stingy Vikings.

Keeping in that low-yardage total mind-set at a measly over/under mark of 66.5 rushing yards, Jones and the Packers face a Chiefs defensive unit allowing 148.9 rushing yards per contest. Couple that with Aaron Rodgers unquestionably returning to earth after last week’s masterpiece, Jones should be in the century mark conversation from the guys and gals on the Sunday Night Football crew.

The Chiefs are letting running backs scamper for 5.0 yards a carry, and Jones is averaging that exact figure in his career up to this point. Even though his early average per-carry figure this season is a yard less at 4.0, he is a safe play for teen-level hand-offs.

He is getting 14.4 runs per game on average, and turning that into 57.0 yards on the ground per week.

The Chiefs defense and the lack of Patrick Mahomes on offense will give the Packers a greater chance to win the time of possession battle, and Jones will help in that, getting his 10 extra yards above his average to attain his over/under mark.

End the week confidently with Jones and the Packers rushing their way to a road victory.