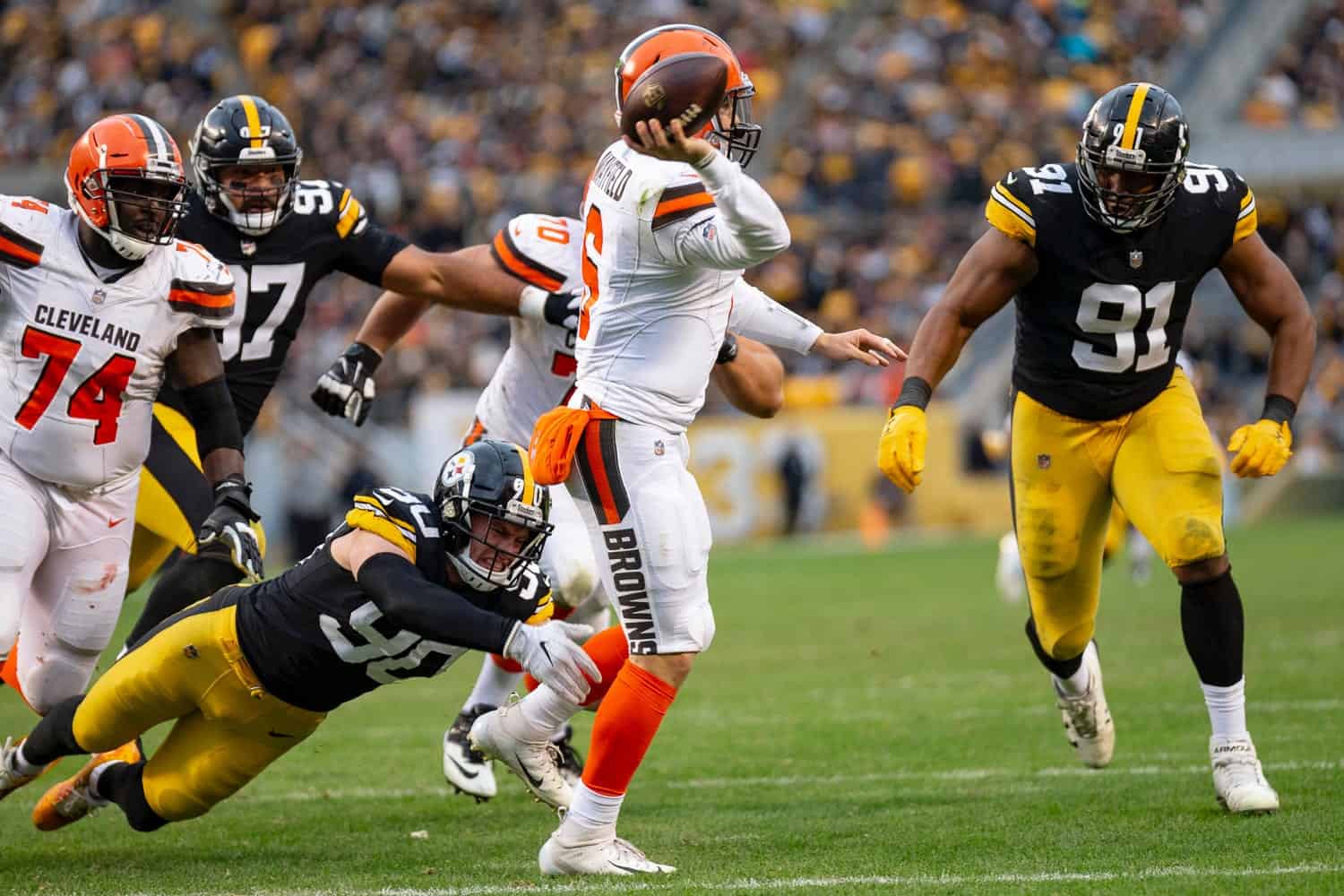 Thanksgiving left our Expert Handicapper feeling like a turkey after dropping a couple of units on the Cowboys and their no-show against Buffalo. Chris remains in the black on the season, but he’ll need a positive Sunday to stay there. He has two teasers and a total to try to get us back on track this weekend. With the December weather creeping in, Chris might have more last-minute plays on Sunday morning than usual. As always, follow Chris’ live plays on the All-Access twitter page. Also, be on the lookout for this week’s “Sundays are for the Dawgs” combo play with PFN Volatility Expert James Aguirre. Now, onto the NFL Week 13 Picks!

This play began with me monitoring the Pittsburgh Steelers line all week in anticipation of grabbing them at +3. Especially considering I think they might win outright at home in a revenge spot. Unfortunately, that +3 never materialized at anything less than -135, so I decided to tease it instead. The total in this game currently sits at 39, so getting nine points with the home team in a divisional rivalry game is obviously desirable.

Baker Mayfield and the Cleveland Browns come into the Steel City on a three-game win streak, and while key injuries on the offensive side plague Pittsburgh, their defense will be foaming at the mouth after the events of Thursday Night Football just two weeks ago.

Besides, Benny Snell has out-performed James Conner in limited opportunities so far. Mike Tomlin, for all his warts, is one of the great underdog coaches in this league. His Steelers teams have gone 33-18 against the spread in his career. He will have this entire locker room ready to run through a wall in Week 13.

Now, with the legendary Devlin “Duck” Hodges under center and more than a touchdown in our pocket, this is a game we feel confident in as the first half of teaser number one. The home team is 4-1-1 against the spread in the last six meetings between these two AFC North foes.

The second leg of the teaser features another divisional underdog with a chance to win outright. Derrick Henry sure does love playing against the Jacksonville Jaguars, doesn’t he? While I don’t expect him to duplicate that performance this week against the Indianapolis Colts, it is essential to point out that Henry has a track record of coming on strong in the final quarter of the season, usually leading fantasy teams across the land to championships.

The Colts have historically dominated this matchup, winning eight of the last ten straight up, and covering the spread in seven of the previous eight at Lucas Oil Stadium. That said, Indianapolis has had only one game decided by more than one score all season, and they’ll be without two of their top offensive weapons in T.Y. Hilton and Marlon Mack this week.

The Tennessee Titans season completely turned around in Week 7 when former Texas A&M wide receiver Ryan Tannehill took over for Marcus Mariota. The Titans have gone 4-1 with Tannehill at quarterback, although all four wins were at home. I could see either side winning this AFC South showdown, but a blowout, either way, seems far fetched. I’ll take the Titans with the nine points.

Aaron Rodgers and the Green Bay Packers should feel right at home on Sunday at MetLife Stadium, where we could see up to six inches of snow on the ground. The New York Giants are a putrid football team, and there’s just no way around it. Their pass defense specifically is bottom five in the NFL, no matter the metric you’re using. This week they get to go against Rodgers and are unlikely to have playmaking Safety Jabrill Peppers. I do think we could be in for a big Saquon Barkley performance on Sunday in the elements, so I’ll be on the lookout for potential player props. Even if he goes bananas, I still expect Green Bay to outscore Danny Dimes and company.

The Giants have only covered the spread in one home game this season, and that was back in Week 4 against the lowly Washington Redskins. Despite that, sharp money appears to be on the G-Men in this one. Even the Sharps aren’t expecting an outright victory for the Giants in this spot. We feel comfortable picking the Packers to win straight up in Week 13.

We continue to fade bad football teams at home in the second half of our teaser. There’s probably an argument to be made that the Philadelphia Eagles aren’t a particularly good football team themselves at this point, but I love them to blowout the Miami Dolphins in this spot. Carson Wentz and the Eagles were watching the Cowboys get lambasted on Thanksgiving and know that there is still a legitimate chance to win the NFC East despite their current losing record.

The Eagles injury report remains one of the lengthier documents in US history, but that shouldn’t matter against the Dolphins. Philly should get Alshon Jeffery back, minimizing the amount of potential Nelson Agholor drops. Miami’s running game is nonexistent, which should allow the Eagles defense to focus all their attention on the resurgent DeVante Parker.

Meanwhile, on the other side of the ball, the Dolphins have always struggled when their linebackers are forced into coverage. Expect coach Doug Pederson to put the Dolphins defense in precarious positions against their two-headed tight end monster of Ertz and Goedert. The Philadelphia Eagles are 7-3 straight up the last ten December games, and we expect them to win by more than a field goal in this one.

Tom Brady’s decline in the second half of the season has been well documented. The Patriots have failed to surpass the 20 point mark in their last three outings. However, I think it’s important to remember that New England has had every game impacted by wind, rain, or both since the calendar switched to November.

I think this is a perfect spot in primetime for the Patriots to put up four or more touchdowns on the fast track in Houston. Defensively, the Patriots have been dominant, allowing an NFL low 10.6 points per game this season. Stephon Gilmore is playing at an elite level while shadowing every opponent’s top wideout. While he is likely to keep DeAndre Hopkins from having a huge fantasy day, don’t expect a zero catch performance like a hobbled Amari Cooper was held to last weekend.

When available, Will Fuller changes the dynamic for the Houston Texans offense. If the Texans fall behind early in this one, Deshaun Watson should be able to use his athleticism to create plays downfield to Fuller and Kenny Stills. While I acknowledge that most trends point to the under in this spot, these teams tend to put up points when matched up with each other.

In fact, the over has come through in 8 of their previous 11 meetings. I suspect we see about a 28-20 Patriots victory, which works just fine for our over call in Texas on Sunday Night Football.

I wish you the best of luck with all of your NFL Week 13 Picks. Be sure to follow the PFN All-Access Twitter account (@PFN365AA) for live updates, Ben Rolfe’s totals article, James Aguirre’s betting guide, Jason Sarney’s player props article, and listen to the Against the Spread podcast with Jason Sarney and Ryan Gosling for more NFL picks!