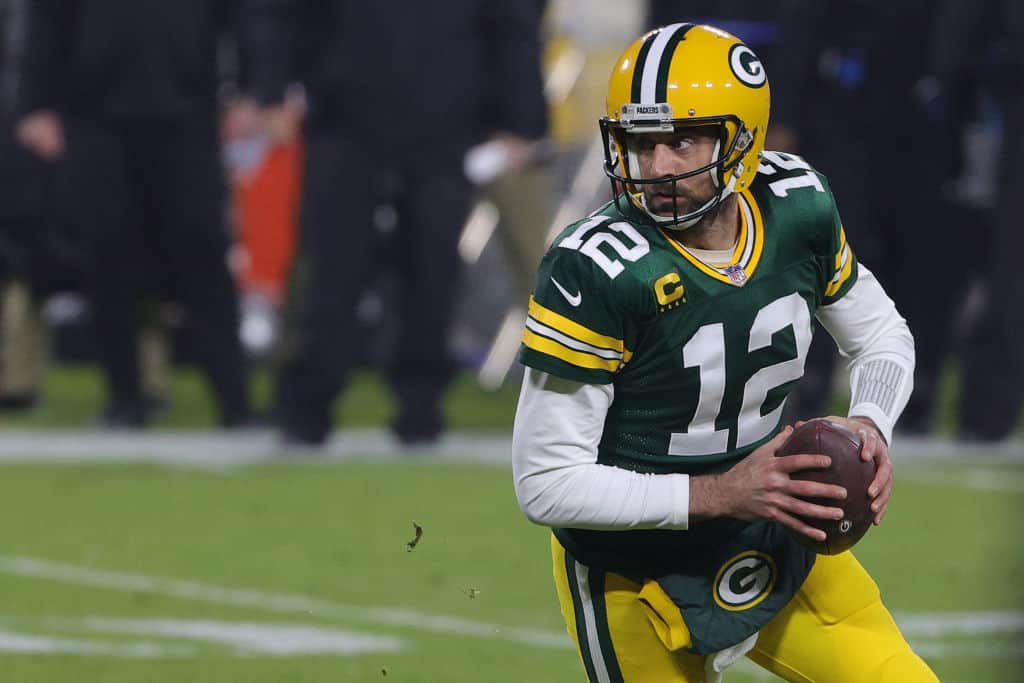 GREEN BAY, WISCONSIN - DECEMBER 19: Aaron Rodgers #12 of the Green Bay Packers looks to pass during a game against the Carolina Panthers at Lambeau Field on December 19, 2020 in Green Bay, Wisconsin. The Packers defeated the Panthers 24-16. (Photo by Stacy Revere/Getty Images)

We have made it to the last week of the final 17-week season before the NFL switches to a 17-game schedule in 2021. As the season ends, the PFN NFL betting team gets the Week 17 NFL odds, so let’s look at the Week 17 betting lines and make our final regular season NFL picks and predictions.

Ryan Fitzpatrick pulled off another work of Fitz-magic in Las Vegas to keep the Dolphins’ playoff hopes alive and well. If Brian Flores wants the best shot of making the playoffs, he’d keep Fitzpatrick in and start him against Buffalo because the offense is non-existent with Tua Tagovailoa as the starter.

The Bills could play this a few ways. They could rest their starters and await Wild Card Weekend, or they could try to end the season of their division rivals. That said, if they lose and Pittsburgh wins, Buffalo drops to the third seed, so expect Josh Allen and company to be a full go.

That being the case, I like where the Week 17 betting lines have this and like Buffalo to cover.

The Vikings defense was on the wrong end of history Friday night as Alvin Kamara lit them up for six touchdowns. Even though their offense scored 33 points, the defense has been a letdown all season.

Detroit was also massacred on Saturday and lost quarterback Matthew Stafford in the process. If the Lions are smart, they don’t suit up Stafford to play a meaningless game, and the Lions have the advantage of playing against Chase Daniel. The Week 17 NFL odds are a little too generous here, in my opinion — I like the Vikings rather handily.

Green Bay is looking to lock up the top seed, and Aaron Rodgers looks as good as he ever has. Rodgers in playoff mode is one of the toughest matchups for any team to face, so the Bears will have their hands full.

Chicago’s offense has come to life over the last month. They have scored 30 or more points in three consecutive games, and Mitch Trubisky has taken a clear step forward in that time. While he may not be in Chicago next season, the Bears are competitive and could keep this one close.

The Colts are now playing with their backs against the wall and need a win and some help to make the playoffs. After blowing a 17-point lead to the Steelers, you can expect an animated Colts team looking for someone to take their anger out on.

Jacksonville has secured the top pick of the draft, and the fans of Duval County couldn’t be happier. That said, they look terrible on the field. They have allowed 40+ points in back-to-back weeks, and their offense can’t score nearly enough to keep up. The Week 17 NFL odds heavily favor the Colts for a good reason.

The Cowboys are somehow very much alive and have a chance to win the NFC East this weekend with a win and a Washington loss. Their offense looked as good as it has all season against Philadelphia, and they will look to carry that to New York.

The Giants have fallen off over the last few weeks, yet they too find themselves with a chance to win the division with a win and a Washington loss. The Week 17 betting lines like Dallas, and I must say, I agree. The Cowboys have more offensive talent that will prove to be too much.

Pittsburgh mounted their best comeback of the Mike Tomlin era, coming back from 17 down to beat the Colts and clinch the AFC North. Ben Roethlisberger turned back the clock in the second half, throwing three touchdown passes in the victory, and the defense forced two turnovers on the day as well.

The Browns were left without several players, including their top three receivers who were on the reserve list, which led to their loss to the Jets. They are now playing for their playoff lives, as a win will get them into the postseason.

The Browns laying four here seems like a huge spread, and I will go against the Week 17 NFL odds and say the Steelers will win outright in Cleveland.

The Falcons blew a 17-point lead in this same matchup in Week 15 and missed a field goal in the waning seconds that would have tied the game against the Chiefs — this team cannot finish.

Tampa Bay beat the Lions by 40 and seem to be riding into the playoffs in sync with one another. The Week 17 betting lines like them by a touchdown, but I like them by at least two possessions.

Even with the dreadful play of Dwayne Haskins, Washington still lost by just a touchdown to Carolina. Assuming Alex Smith and Terry McLaurin will put them at full strength, this offense will be much better.

The Eagles have been a different team under Jalen Hurts. While they came up short against Dallas, that was more the defense’s fault than the offense, which has taken off under the rookie. If Smith is back for Washington, I don’t think the Eagles can do enough defensively to help them win. Washington gets the victory and wins the division.

The Ravens defeated the Giants rather handily in Week 16 and now find themselves as the seventh seed in the AFC playoff picture. A win would secure them a spot, and the way they look right now, I don’t see the Bengals slowing them down.

Give the Bengals all the credit in the world. They have won two straight without Joe Burrow and have shown fight all season.

That said, the Week 17 betting lines have the Ravens laying 13.5, and I don’t see that being too far off. The Bengals defense held Lamar Jackson in check the first time these two teams faced off, but the Ravens defense smothered a putrid Bengals offensive line — expect more of the same.

The Raiders lost heartbreakingly to the Dolphins, and now they get to go to the Mile High City for a game that is sure to have less than forgiving weather conditions to face the Broncos.

Denver has been up and down this season, with their offensive struggles being put under a microscope. Injuries have left their mark on Denver this season, and at this point, they are just hoping their young quarterback Drew Lock was the right choice.

We don’t know what Cardinals team we are going to get week in and week out. One week they are putting on an offensive show like in their game against Buffalo, and another, they are scoring 12 points against a bad 49ers team. They need to show up this week — their playoff hopes depend on it.

Unfortunately for the Rams, Jared Goff’s status is now up in the air due to his thumb injury, so keep an eye on the Week 17 NFL odds for this game if Goff can’t go, as it will sway heavily in favor of the Cardinals. Even if Goff plays, his injuries could hold him and the offense back — I like the Cardinals.

The Seahawks clinched the NFC West with their Week 16 victory over the Rams and are now eyeing the number two seed.

The 49ers will be playing purely for pride and hoping to keep the division rivals as low in playoff seeding as possible. The Week 17 betting lines favor the Seahawks by six. However, the 49ers have played well within the division and will keep this game close.

NFL Week 17 Picks and Predictions: Currently not listed on sportsbooks

The Titans will be looking to wrap up the AFC South, and what a way to do it — facing a Texans team that has been dreadful all season.

No disrespect to Deshaun Watson or J.J. Watt, but Houston lacks any type of game-changing talent outside of those two. The Titans should win this game relatively easily off the run game alone.

We can assume this game is off the board because the Chiefs haven’t announced if their starters will play. If they do, we could be in for a shootout. If not, this should be a Chargers win, but nothing is a guarantee when it comes to the Chargers.

Despite their struggles, Justin Herbert has thrived, breaking the single-season record for touchdown passes by a rookie. Let’s play it safe for now and assume the Chiefs starters won’t play. This would lead me to believe the Week 17 NFL odds would slightly favor the Chargers.

“The Jets have won two straight” is the most 2020 sentence, isn’t it? However, it is a true statement. New York sealed themselves out of the number one overall pick after defeating the shorthanded Browns in Week 16.

New England just isn’t effective offensively. They can’t pass the ball, and their lack of weapons is noticeable every week. It would be fun to see the Jets knock off the Patriots and finish 2020 with three straight wins. However, I don’t see that happening, expect the Week 17 betting lines to favor New England.

The Saints won off the strength of Alvin Kamara’s six-touchdown day. That said, it’s painfully apparent how bad Drew Brees’ arm looks and that they are a one-trick pony on offense.

Carolina’s defense looked superb against Washington, and they have been a tough out all season long. The first matchup between these two teams was close, with the Saints coming out on top. However, I think Carolina returns the favor, which could impact the Saints’ seeding in the playoffs. 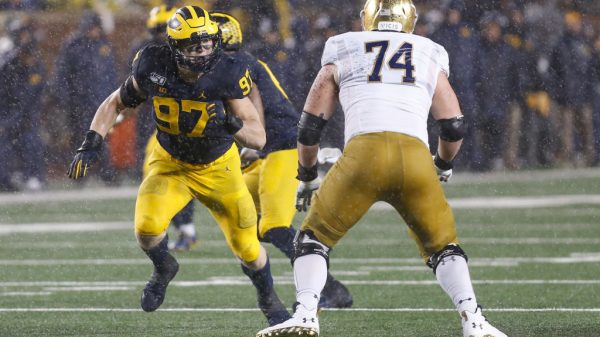 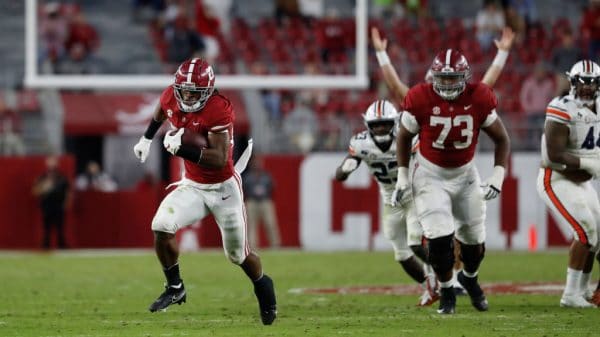 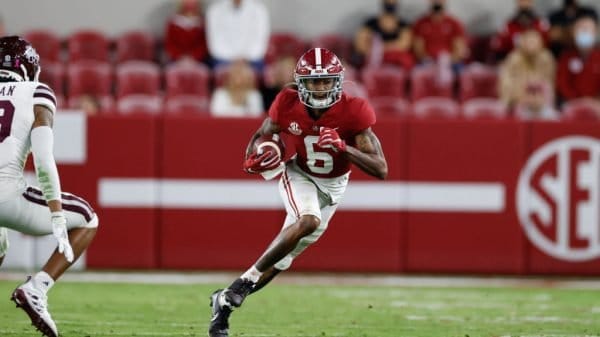