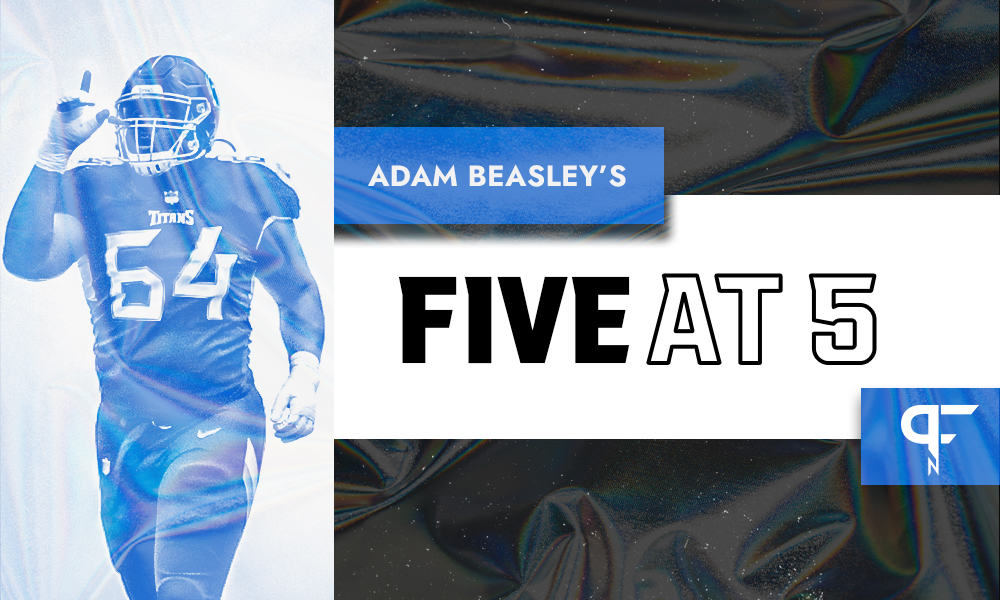 Happy Friday! We begin our Five at 5 with uber-talented Tennessee Titans guard Nate Davis and what his second NFL contract may look like. In this edition, we’ll shine the spotlight on Davis, Tua’s hip, Stephon Gilmore trying to get back to negotiations, and more NFL news from across the league.

As great as Derrick Henry is — and he’s inarguably the best running back in the NFL right now — not enough credit goes to the Tennessee Titans’ offensive line.

And on an offensive line with big names like Taylor Lewan and Rodger Saffold, not enough credit goes to ascending third-year guard Nate Davis. Davis has blossomed into an absolute force at right guard. Industry insiders believe he will get paid like it with another stellar year.

Davis, taken with the 82nd pick out of Charlotte in the 2019 NFL Draft, had a bust-out season last fall. He made a noticeable leap from Year 1, earning an All-Pro consideration as a reward for how good he helped make Henry look.

Davis making the most of his opportunity

Associates attribute Davis’ breakthrough to his work ethic and an ideal situation in Tennessee. The Titans’ offensive line is stacked with veterans, and he’s close with Lewan, Saffold, and center Ben Jones.

Those older players went out of their way to mentor Davis, teaching him what it takes for NFL success. Davis has absorbed it and gotten better not just year to year but week to week. If that trajectory continues, a Pro Bowl season is a real possibility in 2021.

And if that happens, the Titans will face an unenviable choice — give Davis a long-term extension that makes him one of the highest-paid guards in the NFL or let him enter a contract year without one.

Even with a salary cap projected to exceed $200 million, the Titans’ books are a little scary in 2022. Ryan Tannehill’s $38.6 million cap figure is a massive issue, but it’s not the only one. In all, the Titans have eight players projected to account for two-thirds of their payroll.

Saffold, who will turn 34 before the start of the 2022 season, is one of those eight. Jones, meanwhile, is in the final year of his contract. Meaning, regardless of what the Titans decide with Davis, this could be the last year together for perhaps the best run-blocking offensive line in the NFL.

Tua Tagovailoa sent a sizable chunk of his 928,000 Instagram followers scrambling to Google Thursday to learn the definition of “dorsiflexion” and why he was happy it’s “looking pretty good.”

Without getting too deep into the weeds, here’s the short explanation to Tua’s post — in the nearly 20 months since suffering a catastrophic hip injury that ended his Alabama career, Tua’s lower-body range of motion has never been better.

And in that IG story, Tua — shown tucking his right elbow to his right knee in a half-crunch exercise — credited “the man with the plan”: Nick Hicks. Hicks is the co-owner and director of Per4orm Sports.

Tua has tasked him with completing his body reconstruction — a process that has taken longer than the Miami Dolphins quarterback let on last season.

Tua’s hip, which was broken and dislocated in his final collegiate game, wasn’t 100 percent in his 10 appearances as an NFL rookie. He didn’t have full strength or mobility, which was a contributing factor to his uninspiring performance.

But thanks to an offseason of work with Hicks along with the Dolphins’ training and strength staff, Tua should have no physical limitations in Year 2.

“It’s been good to have Nick,” Tagovailoa said last month. “Nick has been a good resource for me to be able to help train the things that I need to work on and whatnot. I have a lot of respect for him and the things he’s helped me accomplish. That’s really it. He’s helped me to get better with my strength and whatnot; but I think a lot of the things outside of that is going to be mental for me, the mental aspect of the game.”

The news out of Chicago doesn’t sound super encouraging for Chicago Bears running back Tarik Cohen, who is still not the whole way back from a Week 3 torn ACL, based on reporting by Sean Hammond of the Daily Herald.

Cohen didn’t participate in OTAs or minicamp and is a candidate to open training camp on the Physically Unable to Perform list. The Bears need him to make a full recovery, even if it’s not before their season opener against the Rams. He’s in Year 1 of a three-year, $17.3 million contract extension.

If Cohen isn’t ready for Week 1, Damien Williams — back from his COVID-19 opt-out season — is in line to be David Montgomery’s primary backup. Williams told reporters this spring that he chose the Bears because their offensive system is similar to that of Kansas City, the team for whom Williams last played.

“Sitting out a year and then coming back, I really didn’t want to learn a whole new system,” Williams said, according to the team’s website. “Coming here and kind of having the same system, same plays, it was easy for me. And then meeting the coaches, meeting everybody in the building, it was just easy for me.”

Stephon Gilmore: “I just want what I’m worth, however that plays out.”

Stephon Gilmore and Xavien Howard are the two best cornerbacks in the AFC East.

And both have proven they’re willing to skip practices to get it, even if those absences get them fined.

Gilmore, the New England Patriots’ two-time All-Pro, doubled down on his position Friday in a conversation with NFL reporter Josina Anderson.

“I just want what I’m worth, however that plays out,” Gilmore said, according to Anderson’s Twitter feed. “Every player should be paid what they’re worth. That’s just how it is.”

Gilmore, who’s owed just $7 million base salary in the final year of his contract, did say that he is pushing for a trade out of New England. He also told Anderson that his surgically repaired quad feels great. However, he didn’t commit to being back to 100 percent by the start of camp. Whether he’s present in Foxborough for that first day remains to be seen.

Los Angeles Rams defensive tackle Aaron Donald is the odds-on favorite to win his second-straight NFL Defensive Player of the Year award and fourth in five years. Sports Betting Dime has him at +400, or 4-to-1 odds.

But if you’re looking for value, WFT’s Chase Young might be your guy. At 16-to-1 odds, he’s a longer shot than perhaps he deserves.

The 2020 NFL Draft’s No. 2 overall pick looked marvelous in a workout video that made the rounds on social media Thursday.

Young had 7 1/2 sacks and 10 tackles for loss as a rookie. Yet, it feels like he’s just scratching the surface.

Adam H. Beasley is the NFL Insider for Pro Football Network. Follow him on Twitter at @AdamHBeasley for all the latest NFL news and rumors.