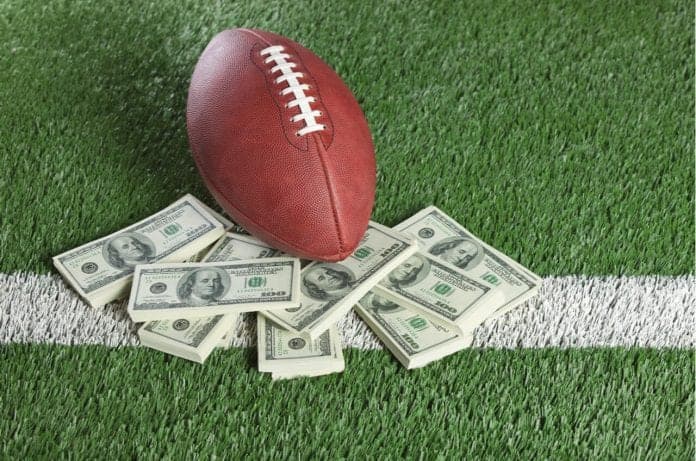 Looking for clarification on NFL betting terms? Our staff has you covered with this comprehensive glossary.

With legalized sports betting sweeping the nation at breakneck speed, it’s more important than ever to recognize various gambling terms thrown around in both conversations and on the internet. NFL betting terms or lingo can frequently be confusing for a novice. We decided to compile this grocery list of terms to help you comprehend the most commonly used jargon in the hopes of becoming a more profitable football bettor.

The act of placing a bet or wager on a particular sporting event (e.g., “I’m just bout that action boss.”).

Against the spread (ATS)

The acronym ATS stands for Against the spread, which means a wager involving a point spread. In this case, the bettor is either taking points with an underdog or laying points with a favorite.

(For anyone who needs a quick reminder on ATS, we found a great recap from Sports Betting Dime on what it means to bet against the spread. Additionally, you can find more information from our own James Aguirre on how to bet on different betting platforms).

The act of placing two different wagers on each side of the same game at different bookmakers. This occurs when there is a difference of opinion between betting companies, allowing the bettor to ensure a profit regardless of the outcome.

A backdoor cover occurs when a team that has little to no chance of winning a game outright, comes from behind and puts up an otherwise meaningless score late in the game to alter the betting winner. Being on the right side of a backdoor cover is pure jubilation.

The bad beat is the evil cousin of the backdoor cover. This occurs when a team has little to no chance of losing a game outright but then allows the other team to put up an otherwise meaningless score late in the game to alter the betting winner. Being on the wrong side of a bad beat is pure devastation.

The total amount of funds that a bettor has available to them for gambling purposes.

Also referred to as a “book,” this is the person or institution accepting wagers on events. This establishment is often the one licensed to creating betting odds as well. Sports Books are commonly referred to as “the house” as well.

This is the practice of paying an additional fee or taking less of a return on your investment to increase the odds of a point spread in a given wager. In regards to NFL betting, this would apply to purchasing an extra point so that the team you bet on only needs to cover a 3 point spread at -120 odds instead of a 3.5 point spread at -110.

The odds-on favorite to win a particular sporting event. The term itself derives from the pre-technology era when sportsbooks posted prices on chalkboards.

CLV is the acronym for Closing Line Value, which describes when a bettor places a wager after the initial lines are posted. More often than not, that opening line will move up or down, pending the amount of money being wagered on a given side. The value comes from wagering on the outcome at a price in the bettor’s favor when compared to the closing line just before the event taking place.

When a bettor accurately picks the correct side of a point spread wager. Examples include a 3 point favorite winning by a touchdown or a 7 point underdog losing by only a field goal.

Any perceived advantage that the bettor is presumed to have over the bookmaker. This edge may be due to inside information (injury?) or advanced metrics, which indicate that a specific point spread seems faulty.

A wager involving no “vig” or vigorish. The odds for this type of bet are generally listed at +100. These are also known as “pick-em” games.

The betting favorite is the team, which is predicted to win a given contest and is, therefore, laying points according to the bookmaker.

The field is a group of players or teams that are not listed among the favorites to win a specific prop bet. Bettors who take the field have the opportunity to cash their wager if any of these unlisted teams or players come through as the winning outcome.

A first-half bet is a wager that is decided at halftime of a given event. The complete game outcome does not come into play, as the first-half results are final in this type of wager.

A future bet is a wager placed in advance. These often happen before a season or postseason starting, in which the bettor attempts to identify a champion, either of a specific division or overall champion. The bettor will not see a payout until the end of the season in this case.

This is the total amount of money wagered on a particular sporting event or for a specific time period.

A hedge is an instance where a bettor places a bet on the opposite side of a pre-existing wager. These types of plays are often made in an attempt to minimize losses, although they can also be placed to guarantee a profit or establish a “middle” opportunity.

This is the extra half point attached to a point spread. The Hook ensures that there can be no “push” on a given wager. In NFL wagering, bettors will sometimes “buy” the hook as a means of getting back to the key numbers of 3 and 7 while diminishing the amount of profitable returns.

This is the established percentage that the bookmaker charges the bettor for any given wager. The most common tax in NFL games is -110, although that number can vary based on any number of circumstances.

These are the most common numbers that football game scores will end on. In the NFL and NCAA, 3 and 7 are the basic key numbers, although 4 and 10 are also key to a lesser extent. Most recently, the XFL conversion rules made the key numbers nearly null and void for that league.

Synonym for betting odds. The margin of expected victory between favorite and underdog in a given sporting event.

Also known as in-game wagering. This involves bets being placed once an event is already in progress with fluctuating real-time odds.

This is what is perceived or touted as a can’t miss wager (e.g., “This is the mortal 5-star lock of the century!”). Occasionally referred to as a “whale” play.

This is a specific type of underdog bet that is highly unlikely to win but offers incredibly long odds, which are often enticing lottery tickets for novice bettors.

This is a situation where separate wagers are placed on opposite sides of the same contest with different betting odds. This leaves a window of opportunity for the bettor to cash in on both bets if the game score lands in the middle of the opposing bets.

One example would be a bettor taking the road underdog at +6 after opening lines are released. After the injury report comes out, the line drops to +3 for whatever reason.

Now, the bettor places an additional wager on the home favorite at -3 and ensures a victory if the final score lands at -4 or -5. The one caveat to this is that if you do not hit the middle, you will lose the vigorish on the losing wager.

A money line wager is one in which the teams are bet to win or lose straight-up with no spread involved.

This is an event that is currently unavailable to wager on due to any number of circumstances, including weather, injury status, etc.

The initial odds released on a particular sporting event.

These wagers are often referred to as “totals” and require the bettor to wager on the total number of points scored in a game, half, or quarter. If a bettor believes the total score will be less than the number posted, they bet the under. Similarly, if they expect more points than the total, they are taking the over. These O/U wagers can also apply to team totals.

This is a wager involving multiple bets that are tied together in which all bets must win to cash out. Due to the increased risk of multiple teams having to cover to win, these bets typically come with increased payouts.

The betting odds which indicate how many points a team is favored to win or lose by.

Props are any wager placed on something other than the outcome of the game. These types of bets frequently include individual player statistics or other things not directly connected to play on the field. Prop bets (or novelty props) are especially popular during Super Bowl week when it is possible to bet on everything from the coin toss to the specific songs performed during an artist’s halftime show.

A push or draw is when the outcome of a particular event falls exactly on the betting line. In this instance, there is no winner or loser among both the house and the bettor. For example, if the home team is favored by 14 points and wins by exactly 14 points, the wager is a push.

ROI is an acronym for Return on investment. This is a basic measurement of efficiency in terms of the bettor’s overall investment.

The term “sharp” is generally used to describe either a person or play that is deemed to be strategic, professional, and respected by sportsbooks. Sharp action may come from individuals or betting syndicates and frequently can move betting lines.

A “square” is the opposite of a sharp bettor. This is the recreational bettor who puts down a few bucks on his or her favorite team on a given weekend.

Wagering on an underdog to cover the spread against the betting favorite.

Similar to a parlay in that the bettor needs the outcomes of multiple games to go their way in order to profit. However, in this wager, the bettor has the ability to manipulate the point spread in exchange for lower payouts.

One example would be taking two teams who were both favored by 6 points and teasing them down to pick-em. Now instead of needing these two teams to win by a touchdown, the bettor only needs the teams to win outright.

Odds on these teasers tend to vary based on the number of points teased, although industry standard is currently -120 for two team 6 point teasers.

The underdog is the team that is predicted to lose a given contest and is, therefore, receiving points, according to the bookmaker.

This is a predetermined monetary amount used to describe the confidence level of someone’s wager without disclosing an individual’s specific investment. Basic betting strategy indicates that a “unit” is generally somewhere between 2-5% of a person’s respective bankroll. The idea is for a universal language of understanding and tracking bets for individuals and groups.

Vigorish, more commonly known as “the Vig” is another term for the juice or tax charged to bettors by the bookmaker on any particular event.