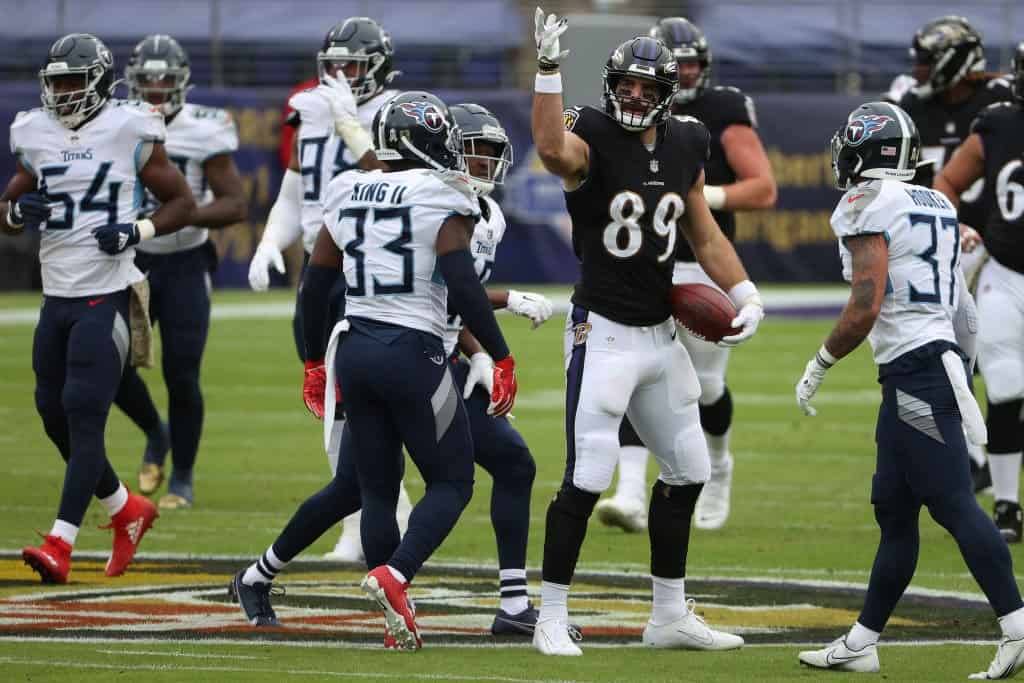 BALTIMORE, MARYLAND - NOVEMBER 22: Tight end Mark Andrews #89 of the Baltimore Ravens celebrates a first down against the Tennessee Titans during the first half at M&T Bank Stadium on November 22, 2020 in Baltimore, Maryland. (Photo by Patrick Smith/Getty Images)

The NFL games today TV schedule for Wild Card Sunday features some intriguing head-to-head face-offs to finish up the first round. Baltimore heads to Nashville to get things started against the Titans. Chicago heads to the Big Easy to kick off against a healthy New Orleans Saints team with a unique broadcast option. Finally, a divisional matchup finishes up the action with round three of Cleveland vs. Pittsburgh. With the second half of Wild Card Weekend quickly approaching, here’s all the info you need to know before kickoff.

The NFL games today TV schedule kicks off with a thrilling ground game matchup. On one side, you have the league’s best rushing offense in the Baltimore Ravens facing off against the second-best in Tennessee. Titans RB Derrick Henry averaged 126.7 rushing yards per game last season. It’s also been one year since Henry ran for 195 yards against the Ravens in the AFC Divisional playoffs.

Related | NFL Playoff Results: Who is playing in the Divisional Round this year?

The Ravens’ three-headed rushing attack of QB Lamar Jackson and RBs J.K. Dobbins and Gus Edwards combine for 165.9 rushing yards per game. Both defenses have seen their struggles this season, and Baltimore suffered a 30-24 overtime loss to Tennessee in Week 11. This game will come down to which QB can make the plays the run game can’t. Tannehill gives Tennessee the edge, and the Titans take a close game over Baltimore.

The second NFL game on TV for Wild Card Sunday features the Bears taking on the NFC’s No. 2 seed Saints. This also features the first NFL game ever to be broadcast on Nickelodeon. The Bears have won just three games since Week 6 of the regular season. While these two have also played before this season, Nick Foles was the man under center for Chicago. The Saints won the Week 8 matchup in overtime 26-23.

The Saints see RB Alvin Kamara and WR Michael Thomas return to the offense just in time to start the quest for the Lombardi. The defense turned things around a bit with a solid performance against Carolina in Week 17 but had a stretch of questionable outings to end the season.

Kamara went off for 166 yards from scrimmage in the Week 8 matchup and should continue to slice and dice defenses the way he has this season. If the Saints defense can perform as they did from Week 9 to 13, where they held their opponents to 8.8 points per game, New Orleans should control it the whole way.

The Browns head to Heinz Field to take on the Steelers for their first playoff game since 2002 and search for their first postseason win since 1994. The last five weeks of the season for Pittsburgh were a disaster, as they lost four of those games. They grabbed some momentum with a win against Indianapolis in Week 16 and rested some starters for their Week 17 tilt with Cleveland.

This will be quite the uphill battle for Cleveland, who has been dealing with medical issues this week and will be without HC Kevin Stefanski and Pro Bowl guard Joel Bitonio, both of whom tested positive. Not only is Stefanski the HC, but he also calls plays on offense. It will be interesting to see how this will affect the quality of the offensive production.