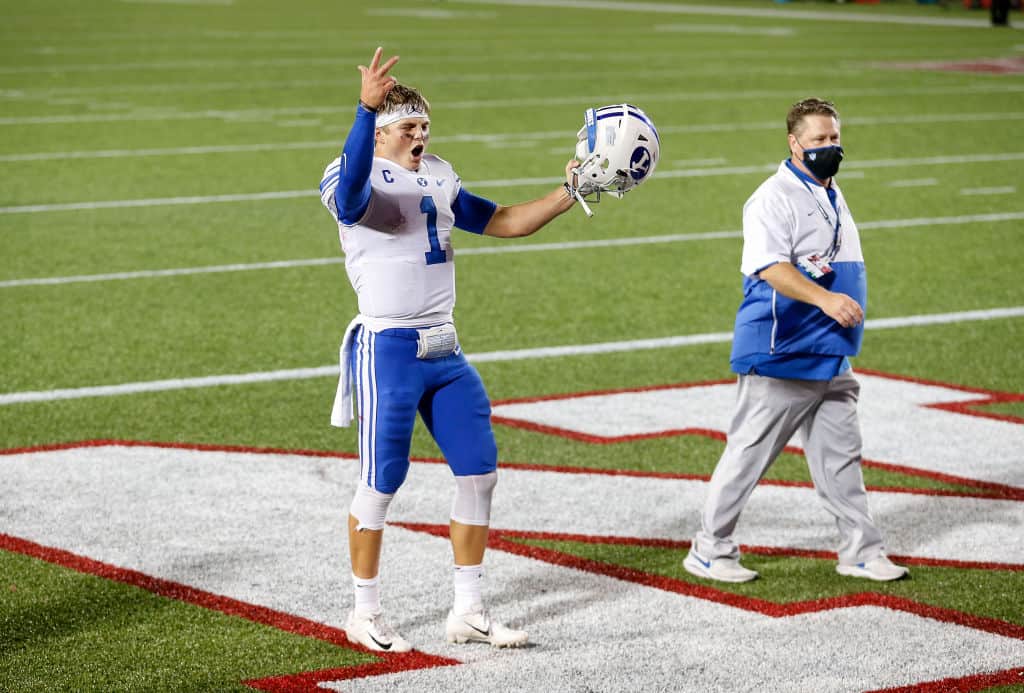 Week 7 on the college football schedule saw continued dominance by the top two teams in the nation — Alabama and Clemson. We also saw one of the fastest rising prospects in the nation continue to raise his NFL draft stock in Week 7 while an up-and-coming cornerback from South Carolina had a great performance as well. Here are this week’s risers and sliders.

If there’s a faster-rising prospect in the nation than Zach Wilson, I’m not aware of him. The BYU signal caller has been brilliant during the first half of the season and turned in another dominant performance during BYU’s victory over Houston. The junior completed 71.4% of his throws for 400 yards and 4 touchdowns, the latter two categories being season bests. In five games this season, Wilson has tossed 12 touchdown passes to just 1 interception.

Except for the fact he’s short, Wilson checks all the boxes you want in a quarterback at the next level — smart, tough, athletic plus the arm strength necessary to make all the throws. Scouts who grade underclassmen stamped him as a fifth-round prospect before the season began, but Wilson has improved anywhere from three to four rounds over the first half of 2020.

Horn was graded as my top Gamecock prospect this summer and a day two prospect. He looked every bit of that against Auburn in Week 7, turning in a month’s worth of production with 2 interceptions, 4 PBU’s as well as 5 tackles to further boost in NFL draft stock. The best part of Horn’s performance was that it came against Auburn star receiver Seth Williams.

Horn has the size, skill and upside to start at the next level and if he builds upon this performance, we are watching the development of a potential top-45 selection.

There were several players from Alabama who could’ve made the risers list this week, DeVonta Smith being a prime example. I chose Dickerson for a number of reasons, first and foremost being his dominant performance. Dickerson plowed holes wide open in the middle of the field for ball carriers, protected his quarterback all night and played smart, tough, football. Second is the fact Georgia presented Dickerson his biggest challenge of the year. He defeated the power brought by Bulldogs tackle Jordan Davis and handled the explosive agility of Devonte Wyatt.

Dickerson is more of a small area lineman and won’t be a good fit for a zone-blocking scheme but he’s tough, powerful and intelligent which lends itself to a long career in the NFL.

The Georgia Tech secondary is good, but Amari Rodgers was better on Saturday — much better.  With a little help from the great passes tossed by Trevor Lawrence, Rodgers caught 6 passes for 161 yards and 1 TD. Included in that tally was an 83-yard touchdown reception that broke open a tie game.

There’s a wide variety of opinion on Rodgers in the scouting community. While he lacks the desired size and speed for the next level, he’s a terrific receiver who does the little things well. Rodgers is worth middle-round consideration and I believe he’s going to be a productive fourth receiver/return specialist at the next level.

I wrote about Thomas over the summer, grading him as a middle-round pick, and the junior has met my expectations thus far. He shut down Tulane edge rusher Cameron Sample, holding the prospect many scouts grade as a sixth-rounder to just half a tackle for loss during the Mustangs victory on Friday.

Thomas is fluid, mechanically sound and moves well on his feet. He’s short for the left tackle position he plays at SMU, yet I see no issue moving Thomas into guard for a zone-blocking system at the next level.

One of the best-kept secrets at the receiver position can be found just north of Dallas in the form of Mean Green senior Jaelon Darden. Entering the season graded as a priority free agent, Darden has been unstoppable this season. On the heels of a 13 catch, 244-yard 3 touchdown performance against Charlotte, Darden caught 10 passes for 204 yards and 1 touchdown against Middle Tennessee. In five games this season, Darden leads the FBS with 10 TD receptions and has caught 46 passes.

He’s a smaller receiver who measures 5-feet-7.5-inches and 175 pounds, but Darden has a terrific burst and makes a lot of big plays. He projects as a slot receiver/return specialist and it’s very possible Darden’s versatility and big-play ability push him into the last round of the NFL Draft.

Entering the season, Devante Loggins was the cornerback scouts graded as a next-level prospect from Mesa State. But Mitchell has been the better of the two this year. During a snowy contest against Black Hills State, just the second game of the year for Mesa, Mitchell intercepted two passes. The prior week against Chadron State, he posted 8 tackles and 1 PBU.

Starting his college career at Louisiana before transferring to Mesa, Mitchell picked off 5 passes in 2018 then took a redshirt season last year. He possesses the size and ball skills to be brought into camp where Mitchell will compete for a spot as a team’s dime back.

Palmer’s 2020 season has paralleled what we’ve seen from the Volunteers — a hot start which quickly petered out. In the loss to Kentucky, Palmer finished with just a single catch for 11 yards. His four-game total is 15 receptions and Palmer has not reached the century mark in receiving yards once this season.

He entered the season with solid middle-round grades, but much more was expected from Palmer — who must quickly turn it around to salvage his NFL draft stock that has fallen through Week 7.