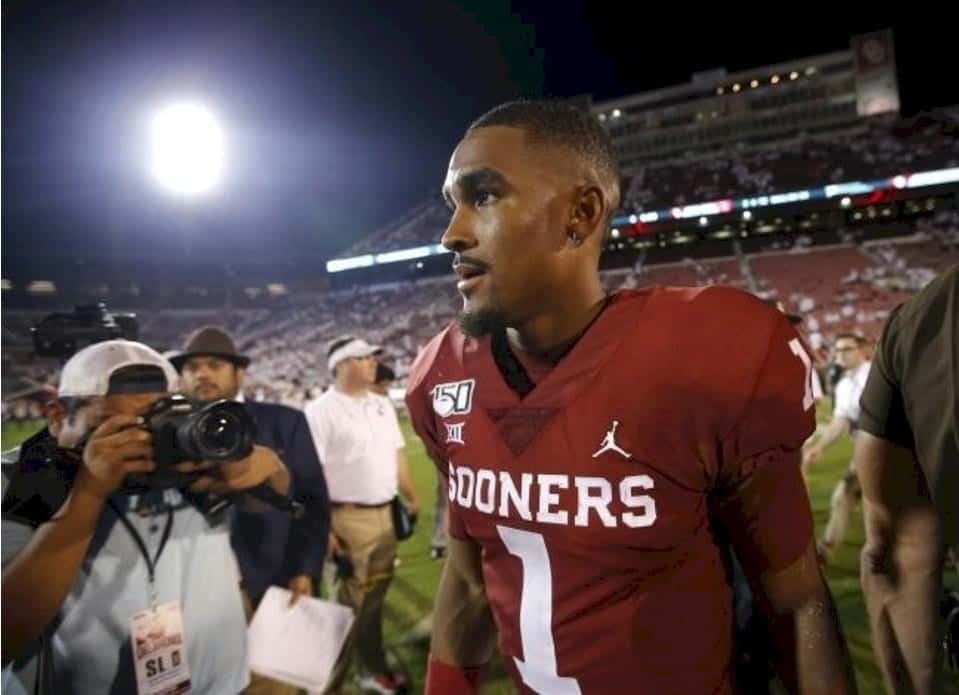 Jalen Hurts, QB Oklahoma:  Hurts has been putting up Heisman-worthy numbers this season, and his stats against Texas Tech were no different – 17 for 24, 415 yards, and 3 TDs. On the ground, he added 70 yards rushing and a touchdown.  Heisman Trophy stats aside, one cannot help but be impressed with the development Hurts has shown this season after rescuing Alabama in the SEC title game last year.

He shows incredible poise, patience, and great decision-making.  His accuracy and pass placement have improved immeasurably. While Big 12 defenses are not very stout, Oklahoma has produced the first pick of the past two drafts.  Hurts won’t be the first pick in 2020, but there is no doubt he will receive consideration in day two of the NFL Draft, something almost inconceivable two years ago.

Chazz Surratt, LB North Carolina:  Last year, Surratt was holding a clipboard as a backup quarterback at UNC.  In 2019, he is slowly developing into a three-down defender and a top linebacker prospect for the next level.

Surratt turned in another great performance Saturday against Clemson’s explosive offense, finishing the game with 7 tackles, 2 TFLs, and 1 sack, as well as 2 PBUs.  He is an athletic defender and a forceful linebacker who does a great job diagnosing plays and then making the tackle.  Surratt has the versatility to play in multiple schemes and comes with a large upside.

Myles Bryant, DB Washington:  Bryant is the embodiment of a terrific football player who will be downgraded because of poor computer numbers.  He’s a tough, feisty defensive back who willingly sells out to make plays.  He posted 7 tackles, 1.5 TFLs, and 1 PBU during the victory over USC.  Bryant offers the possibility to line up in dime packages and play special teams at the next level.

Omar Bayless, WR Arkansas State:  Bayless entered the season graded by scouts as a street free agent and nothing more than mini-camp roster fodder.  Those opinions are changing quickly as Bayless is having a monster season.

Most recently, during a wild conference game against Troy in which ASU came out on top 50-43, Bayless totaled 10 receptions, 213 receiving yards and 1 TD.  In five games this season, he has posted 36 receptions and 7 TDs.  Bayless is a well-sized receiver with dependable hands but questionable speed.  He has enough ability to make an NFL roster as a fifth wideout.

Scotty Washington, WR Wake Forest:  Graded on my board as a priority free agent, Washington is on pace for a career year and is turning heads in the scouting community.  Wake Forest is 5-0 this season, and the senior has 27 receptions, 470 receiving yards and 6 TDs during those games.  He is a big-bodied pass-catcher that was not graded by scouts after a poor junior season in 2018.

However, I believe Washington will get an invite to an all-star event such as the Shrine Game, then could move into the late rounds of the NFL Draft if he runs well during workouts.

James Proche, WR SMU:  SMU is another undefeated squad, and Proche is another receiver helping his squad with consistent play.  During the Mustangs annihilation over conference foe South Florida, he totaled 7 receptions, 96 yards, and 2 TDs.  Proche, graded as a late-round prospect prior to the season, is a well-built possession receiver who should double-up as a punt returner on Sundays.

Sleeper Prospect – Mike Brown, S Miami-OH:  Despite starting nine games as a sophomore last season, Brown fell under the scouting radar. However, no one is sleeping on him anymore.  The junior has elevated every aspect of his game this year and is now getting last-round consideration.

Brown has nice size, shows a lot of athleticism, and covers the pass with the same efficiency he stuffs the run.  Brown posted 6 tackles and intercepted 2 passes during the Redhawks win over Buffalo this weekend.  He is a strong safety type that can line up in a zone system as well as play special teams.

This comes after totals of 7/149/3 the previous week when the Gamecocks beat North Alabama.  Pearson is a tall possession receiver with a nose for the end zone, and a small-school prospect who could make a depth chart as a fifth receiver.

Darryl Williams, C-G Mississippi State:  Williams entered the season graded as a potential late-round NFL Draft pick, but he has been disappointing thus far.  After struggling during the early part of the season, he was beaten like a drum by Derrick Brown during Auburn’s dominant victory.  Williams needs to turn it around quickly, or he will be on the outside looking in next April.

Scottie Phillips, RB Mississippi:  I graded Phillips as a potential seventh-round pick before the season, three rounds later than scouts stamped the senior.  Thus far, it has been a struggle for the running back who has totaled 389 yards and caught just 4 passes in the Rebels’ first five games.  Phillips is an average-sized ball carrier with no distinguishing characteristic about his game and a prospect who may ultimately go undrafted.