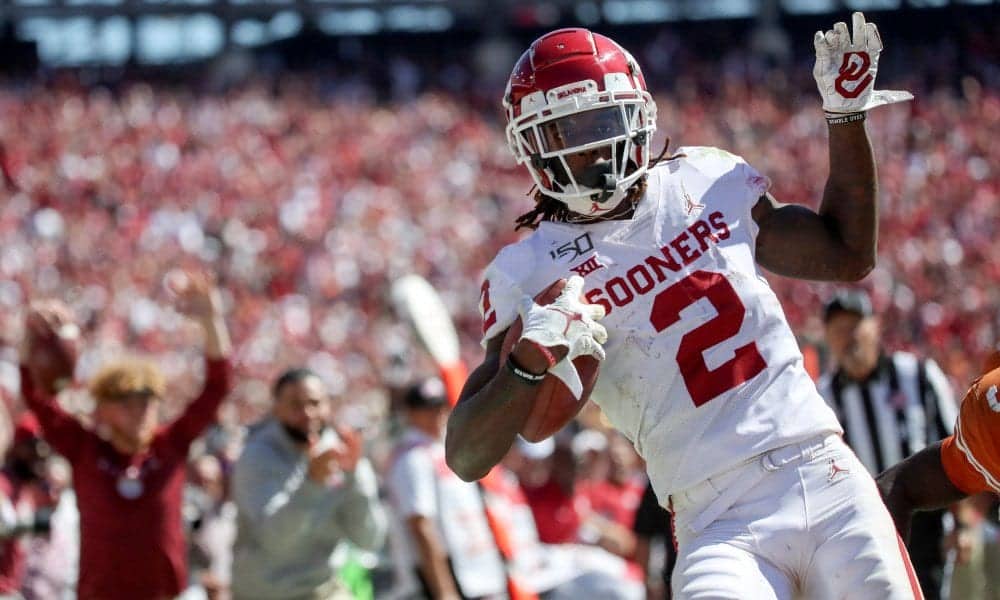 It was a terrific weekend of college football as Penn State and Wisconsin made their case to be considered serious playoff contenders while Georgia now has a steep hill to climb after an unexpected loss. It was also a week where several receivers and offensive line prospects stood out to NFL scouts, and another highly rated quarterback bit the dust. As we continue our march towards the 2020 NFL Draft, here are the NFL Draft Risers & Sliders for Week 7.

CeeDee Lamb/WR/Oklahoma:  Oklahoma Sooners wide receiver CeeDee Lamb turned in a dominant performance on Saturday that will long be remembered. With a 34-27 win over Texas, he helped lead the Sooners to the fifth spot in the AP Poll and first place in the Big 12.

Running circles around the Texas defenders, he almost single-handedly beat the Longhorns during the Red River Showdown at the Cotton Bowl. He hauled in 10 catches for 171 yards and 3 TDs, including a 51-yard touchdown on a flea flicker from quarterback Jalen Hurts. The way he scored those touchdowns, breaking tackles along with some spectacular running after the reception, is what stood out.

The junior, who was on the scouting radar entering the season, has improved to the point where he is likely to get first round conversation next April if he enters the draft, something I’m told he will do. But for now, Lamb will continue to help Hurts and head coach Lincoln Riley rise in the rankings for a shot in the College Football Playoffs.

Brandon Aiyuk/WR/Arizona State:  Aiyuk has shown flashes of big-play/game controlling ability all season, and the junior continued that in a dominant performance against Washington State. He finished the game with 7 receptions, 196 yards, and 3 TDs, helping the Sun Devils to a 38-34 victory. Aiyuk is averaging just under 20 yards on 31 receptions this season, and he’s a fundamentally sound pass catcher with dependable hands. Graded as a sixth round prosepct by scouts entering the season, Aiyuk could land on the second day of the draft if he runs well during combine workouts.

Alex Leatherwood/T/Alabama:  Last year, Leatherwood displayed plenty of next-level skill lining up at guard for the Crimson Tide, but his game has taken off since he moved to left tackle taking over for Jonah Williams. Leatherwood looked terrific during the victory over Texas A&M, displaying impressive footwork, fundamentals, and balance. He looks more natural at the left tackle position than Williams, comes with a terrific amount of upside, and has done a good job of helping protect quarterback Tua Tagovailoa. I presently grade him as a second-round prospect oni my big board, and it won’t be long until Leatherwood is talked about as a first-round candidate.

Larrell Murchison/DT/North Carolina State:  Murchison received grades from scouts, which ranged from the third to the sixth round. During the Wolfpack’s victory over Syracuse, the senior played like a second-day prospect. Finishing the game with 6 tackles, 2 TFL’s and 2 sacks, he was a constant nuisance and a disruptive force all evening. For the season, Murchison has 7 sacks from his defensive tackle position. He’s slightly undersized, tipping the scales around 285 pounds, but he moves well, displays a great deal of quickness, and perfectly fits as a three-technique tackle at the next level.

Yasir Durant/T/Missouri:  Entering the season graded as a potential fourth-round prospect by several scouts, Durant has shown consistent development in his game and is drawing a lot of praise. He’s a massive lineman at 6-feet-6.5-inches and 335 pounds, yet moves well around the field, displaying a great amount of quickness and explosion. Durant is still rough around the edges but possesses terrific upside, and if properly coached, he could eventually start at right tackle on Sundays.

Shane Lemieux/G/Oregon: Lemieux entered the season graded as a fourth-round prospect by scouts. Although I have concerns about his athleticism, he’s proven to be one of the best small area blockers in the nation. Lemieux is a powerful lineman who dominates opponents once engaged in a block. His blocking helped pave the way for 275 rushing yards during the victory over Colorado, a game in which the opposition recorded just a single sack.  Lemieux will struggle in a zone-blocking scheme at the next level but would flourish in a system that reduces his area responsibilities.

Sleeper Prospect – Greg Reaves/Edge/South Florida:  Reaves was a player I graded highly off of 2017 film, but his game took a step back last season. The pass rusher is playing well once again in 2019, most recently turning in a 7 tackle, 1 TFL, 1 sack performance during the comeback win against BYU. Reaves, who was ignored by scouts entering he season, offers potential as a pass rush specialist at the next level coming out of a three-point stance or standing over tackle.

Small School Prospect – Ben DiNucci/QB/James Madison:  This is my second east coast signal-caller to be named “Small School Prospect of the Week.” DiNucci, a transfer from Pittsburgh, was ignored by scouts over the summer despite a terrific campaign in 2018, and he’s playing even better in 2019. Having been improving his accuracy and cutting down on interceptions this season, he completed 20 of 32 passes for 216 yards and 3 TDs during an all-important conference victory over Villanova on Saturday. He’s patient, intelligent and possesses a live arm. I could see DiNucci receiving an invitation to the Shrine Game, then being selected late in next April’s draft.

Steven Montez/QB/Colorado:  I’ve supported Montez the past two years and believed the potential I previously witnessed rather than his present results. This ended Friday night when Montez turned in a horrific performance against Oregon, completing 19 of 34 passes for just 131 yards and tossing 4 INTs. Montez has never shown any real improvement in his game since his sophomore season and in many ways, has regressed on the field. This will amount to disaster for his draft stock.