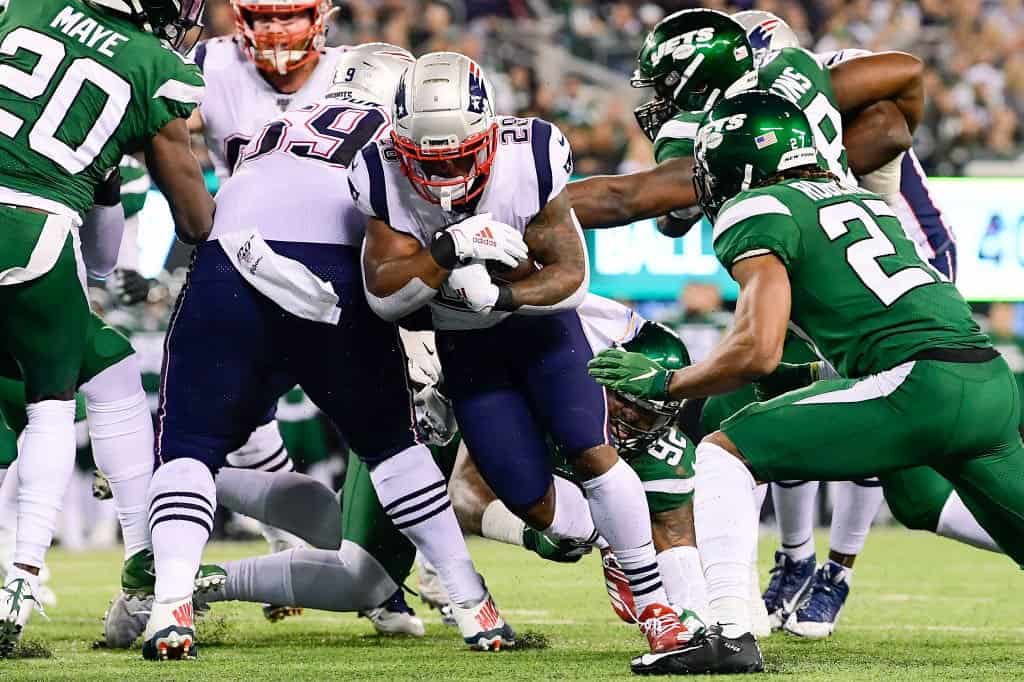 EAST RUTHERFORD, NEW JERSEY - OCTOBER 21: James White #28 of the New England Patriots runs the ball against the New York Jets at MetLife Stadium on October 21, 2019 in East Rutherford, New Jersey. (Photo by Steven Ryan/Getty Images)
What's in this article? Click to show
The Patriots project to be around $69 million under the salary cap in 2021
New England has a handful of potential options for releasing players
The Patriots have players they can extend or restructure to create cap space in 2021
Want more NFL news and analysis?

Following a transitional 2020 NFL season, what is the New England Patriots’ salary cap situation in 2021? Let’s take a look at where the Patriots stand with their salary cap in 2021, and what options they have if they wanted to open up more salary cap space.

As it stands, the Patriots have just under $134.9 million in commitments to their top 51 highest-paid players, with an additional $0.9 million in dead money. Therefore, the Patriots are currently around $68.9 million under the salary cap heading into 2021.

New England has a handful of potential options for releasing players

With plenty of salary cap space in 2021, the Patriots have no urgency to release players. However, they still need to add a quarterback and could be in the market to upgrade a number of positions on both sides of the ball.

Would the Patriots consider moving on from Dont’a Hightower?

Hightower is set to return to the Patriots after sitting out the 2020 NFL season. During that time, the Patriots saw Ja’Whaun Bentley emerge as the centerpiece of their defense. Hightower is due to count $12.4 million against the Patriots’ salary cap in 2021. Releasing him could save them $9.9 million that they could use to upgrade their offense.

Could we see Stephon Gilmore traded this offseason?

The Patriots do not need to make any emergency moves ahead of the league year. However, a player like Stephon Gilmore could be on the move once the new league year begins.

Gilmore is considered one of the best corners in the league and should have a robust market. If the Patriots were to trade Gilmore in his final season with the team, they would clear $7.3 million in salary cap space. They would still be left with $8.9 million in dead money. A player of Gilmore’s quality could bring back a reasonable haul of draft picks.

With limited players likely to be released, the Patriots may extend or restructure contracts if they wanted to open up more salary cap space.

Could Gilmore actually be a candidate to get an extension?

The Patriots are in a transitional phase. If they find a quarterback in the 2021 offseason, they could be ready to challenge again immediately. If so, Gilmore figures to be a big part of that. With the Patriots having plenty of salary cap space in 2021, do not be surprised if they use some of that to frontload the deal for Gilmore in the event of an extension.

The Patriots have decisions to make on their offensive line

The Patriots have five offensive linemen to make decisions on this offseason. With both David Andrews and Joe Thuney set to be free agents, the Patriots may want to address the other three linemen on their roster.

2018 first-round selection, Isaiah Wynn, is set to enter the fourth year of his rookie deal. While the Patriots will likely pick up his fifth-year option initially, they may look to extend him. There would not be a window to save much by extending Wynn, but they could use some of their available cap to make the deal team-friendly in later years.

Right tackle Marcus Cannon did not take part in the 2020 season. Therefore, he enters 2021 with two years remaining on his deal. In 2021, Cannon is set to count $9.6 million against the Patriots’ salary cap. Extending him could be a way for the Patriots to open up $3.7 million that they could spend elsewhere.

Right guard Shaq Mason has three years remaining on his deal. Therefore, he may be a player the Patriots would restructure rather than extending. The Patriots could move $3.3 million in salary cap space into the future if they wanted to use that space for Wynn. However, it seems unlikely they will do anything significant with Mason’s deal this offseason.

The decision is looming on Sony Michel

The Patriots likely have to make a decision on Sony Michel this offseason. There are a number of options in play. They could allow him to play out this season and be a free agent next offseason; they could pick up his fifth-year option, which is set to cost $4.4 million.

Realistically, it seems unlikely the Patriots extend Michel. He has performed in short bursts with little consistency. There is the option that the Patriots could release Michel. However, with $1.8 million in dead money and a 2021 salary cap saving of just $1.2 million, it is doubtful the Patriots take this step early in the offseason.