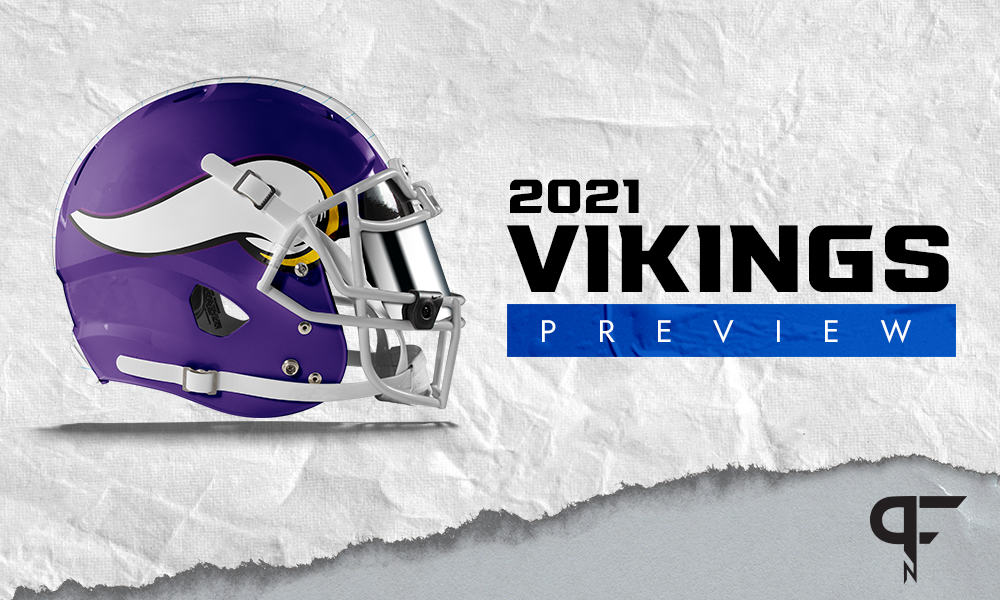 The Minnesota Vikings did a lot in the 2021 offseason to improve, but they don’t preview as a playoff team in the NFC this season, at least according to Las Vegas. After striking gold with the selection of Justin Jefferson in the 2020 NFL Draft, could the Vikings have done the same with their 2021 first-round pick? Also, can they compete in a division including Aaron Rodgers?

The difficult part of the schedule comes in their divisional battles with the Packers and battles against the Rams, 49ers, and Ravens. Furthermore, they have to play the Seahawks, although that game comes at home.

The return of Danielle Hunter and Michael Pierce in 2021 is a massive upgrade for Minnesota. Both missed the entire 2020 NFL season. Pierce is one of the best run-defending nose tackles in the league, and Hunter is one of the most gifted pass rushers on the edge. Minnesota also went out and added Dalvin Tomlinson in free agency. Tomlinson will help improve the defensive line alongside Hunter and Pierce.

Additionally, the Vikings acquired Patrick Peterson in free agency, which helps a young group of cornerbacks. He might be over the hill athletically, but the team hopes he can give them some relief as Cam Dantzler progresses.

However, the Vikings also lost a lot in the offseason. They cut ties with offensive tackle Riley Reiff, tight end Kyle Rudolph, and kicker Dan Bailey. The biggest loss, in fact, came in the form of safety Anthony Harris signing with the Eagles.

Minnesota went berzerk in the 2021 NFL Draft, making 11 total selections in the top-200 picks. The Vikings were the winners of the first round. They traded back from 14 to 23 and still somehow selected Christian Darrisaw. Darrisaw is the definition of a franchise left tackle and should quickly acclimate to the NFL level.

The selection of Kellen Mond was a bit peculiar, but they could certainly use some insurance for the future. Mond has developmental physical tools and flashed high-end ability. Drafting Chazz Surratt was also interesting, but he should have a chance to compete for a starting spot alongside Eric Kendricks.

Wyatt Davis was a great upside pick for the Vikings. He needs to play more consistently, but in a slowed-down offense in the pros, he shouldn’t play as gassed as he was at times at OSU. Pittsburgh defensive end Patrick Jones is a nice outside rusher, but he must get stronger against the run if he wants to receive a significant snap count.

Where do Minnesota players rank in PFN’s Top 100?

Thielen might be on the downswing of his career, but he’s still a nice second option next to Jefferson. Thielen’s usage with Stefon Diggs is proof of his abilities. There aren’t many better route runners than Thielen, and his ability to separate has always been his calling card.

Hunter didn’t even play for Minnesota in 2020. Yet, he still lands inside PFN’s Top-100. He’s an explosive freak who has a plethora of pass-rush moves in his repertoire. Hunter has great snap timing and an excellent plan of attack. His cross chop is one of the finer rushes in the game.

Cook averaged 111 yards per game this past season. His only issue has been his availability. He’s one of the most gifted runners in the league, and his unbelievable acceleration allows him to slide by linebackers and gash the defense. Cook was fifth in the league in 10+ yard runs in 2020.

Jefferson had one of the most unbelievable rookie seasons that we’ve seen in a long time. His rocker step is lethal against soft coverage, and he was elite against press man as well. The sky is the limit for him heading into 2021 for the Vikings.

Mike Zimmer is the butt of a lot of jokes for how old school his teams play stylistically. Nevertheless, the Vikings are 64-47 in his tenure — making it difficult to argue with the results.

The Vikings’ offense fell just outside of the top 10 in efficiency last season. On the contrary, their rushing efficiency was comfortably inside the top 10. The offense was let down in 2020 by the defense, but that shouldn’t be the case in 2021. If the offense continues its efficiency, this team should see much better results in 2021.

The defense was poor in 2020, but they lost a few names on the defensive line that crippled their ability to execute. Despite having one of the best linebackers in the NFL, the defense was nearly dead last in the league against the run.

Despite Vegas believing this is a middle-of-the-road schedule when you go on a game-by-game basis, Minnesota’s strength of schedule looks daunting. It wouldn’t surprise me if the Vikings win 10 games in 2021, but Minnesota looks like a 9-8 team for this season preview.