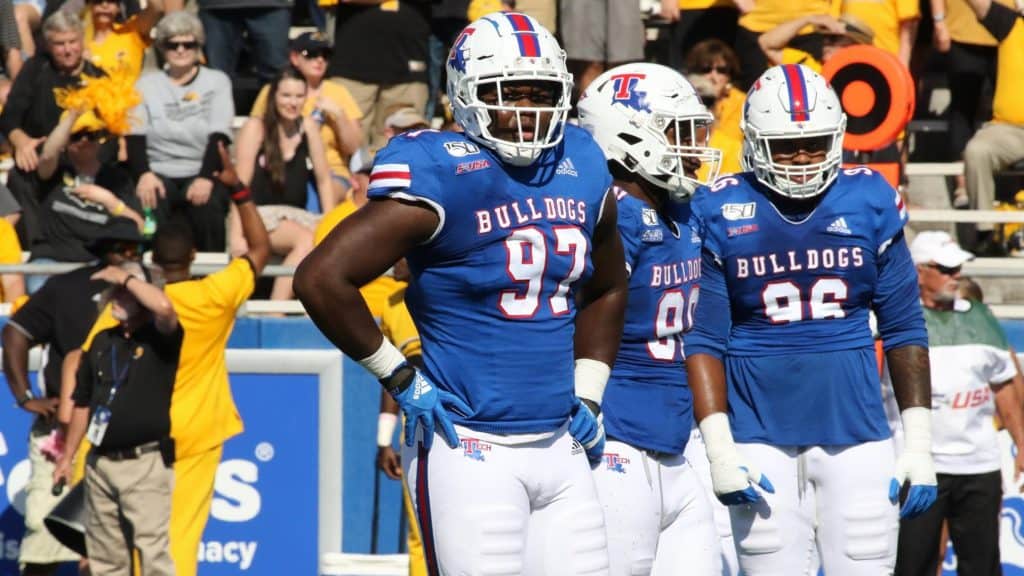 After a standout 2020 campaign, Louisiana Tech defensive tackle Milton Williams has seen his 2021 NFL Draft stock soar. Can the versatile defensive lineman continue the Bulldogs’ current five-year streak of having a player drafted to the NFL?

Positives: Fast-rising defensive lineman who started the past two seasons. Smooth, rarely off his feet, and plays with outstanding pad level. Easily alters his angle of attack or redirects to the action. Strong for his size, stands up blockers, and makes plays against the run.

Fast getting to the flanks in pursuit of the action and effectively works his hands. Bends off the edge, quickly gets upfield, and moves fluidly in every direction. Athletic and agile.

Negatives: Not a quick or sudden lineman and lacks a great first step off the snap. Must improve his playing strength.

Analysis: Williams’ draft stock has been on a straight shot north the past two seasons, as his athleticism and development have been very impressive. He comes with a large amount of upside but is a scheme-specific player who would be best in a four-man line. Williams could contribute as a rookie while he continues to develop before breaking in with the first team.

He may have emerged late as a 2021 NFL Draft prospect, but Louisiana Tech defensive tackle Milton Williams began his football journey in productive style. Growing up in the football hotbed that is the state of Texas, he attended Crowley High School. While at Crowley, he played both football and basketball, showcasing a versatile and athletic skillset.

During his high school career, the 230-pound defensive end put together some eye-opening statistics. He had over 300 career tackles, 22 sacks, and scored 4 touchdowns. In his senior season, he was named the District 5A Region II Defensive Player of the Year.

In spite of his success, Milton Williams wasn’t highly recruited. Ranked as just the 127th strongside defensive end and 380th player in Texas, he only received one major offer. That came from the Louisiana Tech Bulldogs, and Williams enrolled in 2017.

As a 6’4″, 240-pound defensive end, he would need some seasoning before meeting the more physical demands of the college football game. Williams took a redshirt in 2017 before making his Bulldogs’ debut against Southern Louisiana in 2018. Although he saw limited action as a redshirt freshman, he impressed with 2 tackles against an SEC opponent in Mississippi State.

He continued his rise to being a prominent member of the Louisiana Tech defense in 2019. Williams started all 13 games as a redshirt sophomore. He secured his first tackle for loss against Grambling State, before logging his first sack just two weeks later against Florida International.

Following a season where he ranked second on the team in tackles for loss (9) and led the team in sacks (5.5), he received an All-Conference-USA honorable mention. Once again, he demonstrated his ability against Power 5 opposition with 1.5 sacks in the Independence Bowl versus Miami.

While many players were considering opt-outs ahead of the 2020 season, Milton Williams was putting in work. He added 10 pounds of muscle during an offseason where he worked out alone in a private gym.

The results paid off on the field. Following a season in which he was tasked with playing inside for the first time in his career, the Louisiana Tech defensive tackle excelled. His 10 tackles for loss ranked fourth in the conference, as did his 4.5 sacks. He racked up 3 tackles for loss in a standout performance against U.A.B. As a result of his performances, he earned All-Conference-USA First Team honors.

Having completed four years of college, Louisiana Tech defensive tackle Milton Williams declared for the 2021 NFL Draft at the end of the 2020 college football season.

As Tony Pauline alluded to in his scouting report, Milton Williams’ best fit in the 2021 NFL Draft is with a team running a four-man front. At 284 pounds, he is perhaps a little light for consideration as a full-time player inside in the NFL. However, the versatility of playing both inside and outside during his final season at Louisiana Tech means he should be able to carve out a role in the NFL.

Williams tested as one of the most athletic players in the 2021 NFL Draft, regardless of position. At his pro day, he logged a 4.67 40-yard dash, a 38.5-inch vertical, a 121-inch broad jump, 34 bench reps, and elite agility numbers as well. Overall, Williams’ athleticism alone could make him a potential Day 2 pick.

There are multiple teams with defensive line needs including the Cleveland Browns, Buffalo Bills, and Dallas Cowboys. Louisiana Tech’s Milton Williams could be an enticing add for those organizations, among others.