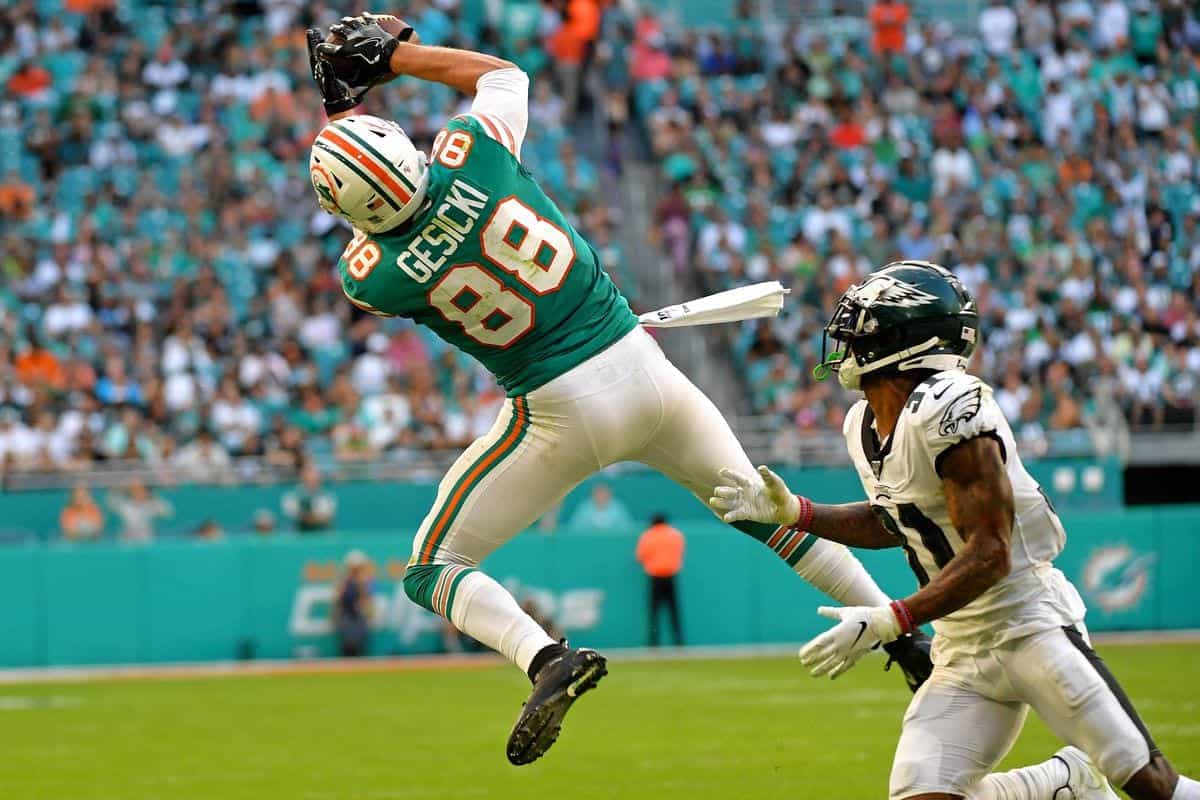 What's in this article? Click to show
Mike Gesicki had an up and down rookie season
Can Gesicki build off the second half of the 2019 season?
The Miami Dolphins Quarterback Situation
Will new Dolphins OC Chain Gailey have an adverse effect on Gesicki’s targets in 2020?
Gesicki’s yardage and receptions player prop bet
Mike Gesicki’s touchdown prop prediction

Mike Gesicki currently has 2020 player props available for catches, yardage and touchdown totals at several popular bookmakers. Gesicki will look to continue his upward trend of offensive production while potentially sharing targets with several pass catchers returning from injuries which cost them time during the 2019 regular season. Can he catch enough passes to cash the overs on these player props?

Featured | Despite recent injuries, Albert Wilson could see a return to form in 2020

Gesicki was drafted in the second round of the 2018 NFL Draft by the Miami Dolphins to be the pass catching tight end Miami has longed for since the Randy McMichael era. The Penn State product showcased his rare athleticism at the scouting combine that year, posting “elite” grades for both explosion and agility. That performance boosted his draft stock tremendously, to the point that Gesicki was chosen seven spots earlier than fellow highly touted tight end Dallas Goedert by the Philadelphia Eagles.

Mike Gesicki had an up and down rookie season

Gesicki’s rookie season was a bumpy road catching only 22 passes for 202 yards and no touchdowns. During the first half of his sophomore season, Gesicki showed minimal improvement but still wasn’t making much impact, particularly as a red zone target.

After the unfortunate loss of wide receiver Preston Williams to a knee injury, however, everything changed for Gesicki. Over the course of the second half of the season, Gesicki caught 30 balls for over 300 yards and 5 touchdowns, emerging as a major threat within the offense.

Now, his 2020 player props have been posted with Gesicki projected to haul in 56.5 receptions, 649.5 yards and 4.5 touchdown passes over the course of the 16 games. Can Gesicki continue his ascension as a top tier tight end in 2020 and is there one regular season player prop that holds particular value?

On this past week’s Dolphins Podcast I joined Eric Wiedeke and Kai’Chien Chisholm to discuss the best Mike Gesicki 2020 player props and much more. You can hear the entire episode below in the embedded player. Please note that the article continues after the podcast player.

Can Gesicki build off the second half of the 2019 season?

The final regular season statistics for Gesicki in 2019 are a modest 51 receptions on 89 targets with 570 yards and 5 touchdowns. These numbers would put Gesicki outside the top ten in terms of fantasy players at his position. For comparison sake, the aforementioned Goedert finished the season with seven more catches and 37 more yards on the year.

However, there is no denying how essential Gesicki became to the Miami offense in the second half of the season, and his numbers down the stretch hint at a player primed for another jump during the 2020 season.

The tight end position is often a difficult one for rookies to shine statistically during their first year or two in the NFL. Go back and look at the first couple of seasons of guys like Zach Ertz or Greg Olsen. Whether getting acclimated to blocking assignments or lack of familiarity with the offense and quarterback, several eventual stud tight ends have had their growing pains early on.

Judging simply from the eye-ball test, Gesicki looked like a completely different player in terms of confidence and productivity by the time he caught the game winning touchdown in Foxboro in Week 17.

Since Gesicki did so much of his damage within the Dolphins offense once Williams went out with injury, it is fair to ask whether the return of “the Unicorn” will have an adverse effect on Gesicki’s statistical output. After all, Gesicki saw his overall target share increase from 11% to 18% with Williams out of the lineup.

With Albert Wilson and Jakeem Grant both returning from missed time in 2019 as well, there are certainly more mouths to feed in 2020.

Keep this in mind in particular when examining Gesicki’s player prop involving receptions. It would be difficult for him to reach 57 catches while only seeing the 3.9 targets per game he was getting prior to Williams’ departure.

Featured | Despite recent injuries, Albert Wilson could see a return to form in 2020

While the injury to Williams triggered an immediate uptick in targets for Gesicki, so too did the insertion of Ryan Fitzpatrick back into the starting lineup after a brief Josh Rosen experiment. Fitzpatrick’s propensity for throwing the ball downfield was huge for Gesicki late in the year. In fact, Gesicki’s ten targets from 20 yards or more downfield were the most of any tight end during the stretch in which he played with Fitzpatrick.

here’s a look at his 5 TDs, including the week 17 game-winner vs new england. #finsup pic.twitter.com/48LyYBBZZU

Fitzpatrick is expected to start, at least initially, for the Dolphins in 2020 and this is tremendous news for a young tight end who knows his quarterback has confidence in him to catch the ball in big spots.

This is also great news if you are looking at the Gesicki player prop involving receiving yards. The projected total of 649.5 yards should be well within reach if Gesicki continues to see these deep targets.

The inevitable next question, is what if it’s not Fitzpatrick? What if we see Tua Tagovailoa under center much earlier than any of us could have imagined back on draft night in April?

While Tua didn’t throw a ton to tight ends within the Alabama system, Gesicki isn’t necessarily the prototypical tight end in terms of route running and formation. In fact, Gesicki ran a majority of his routes from the slot last season, a spot on the field which Tagovailoa will be very comfortable targeting.

Will new Dolphins OC Chain Gailey have an adverse effect on Gesicki’s targets in 2020?

One interesting organizational change that some folks believe will work against Gesicki this season is the hiring of Chan Gailey as offensive coordinator. Tight ends have not been a major focal point of the offense historically under Gailey’s watch.

In fact, during his previous AFC East stints with the Buffalo Bills and New York Jets, tight ends accounted for an average of 28 catches for 313.2 yards and 3.2 touchdowns over a five year span. Ouch.

While those numbers certainly cause for concern initially, let us remember that the likes of Scott Chandler and Jeff Cumberland weren’t exactly All-Pro level talents at the position. Subsequently, Hall of Famer Tony Gonzalez thrived in Gailey’s system, piling up 96 receptions for 10 touchdowns and over 1,000 yards in 2008 with the Kansas City Chiefs.

No one is suggesting that Gesicki is as talented as Gonzalez in his prime, but I think we can take the “Gailey’s system ignores tight ends” theory with a grain of salt.

Of all the Gesicki player props, the one I would probably stay away from would be the 56.5 regular season receptions. While I think Gesicki has a decent chance of catching six more passes than he did during his 2019 campaign, I suspect the Dolphins to be involved in several closer games in the second half than they were last year.

Combine that with the fact that Miami suddenly has two reliable running backs after Fitzpatrick led the team in rushing in 2019 and the number of targets available for Gesicki may very well decrease.

I strongly believe Gesicki continues to improve his overall play and I would lean to the over on his 649.5 receiving yards prop. Whether Fitzpatrick or Tagovailoa play the majority of the regular season games shouldn’t matter for a tight end running so many downfield routes.

While the targets could slow down off the pace he enjoyed late last season, I see no reason Gesicki can’t improve off of last season’s performance in terms of yardage.

There is one Mike Gesicki 2020 player prop which I suggest grabbing immediately. Gesicki had a total of five touchdown catches in 2019, although all five of those came in the final six regular season games.

Yet somehow, the projected touchdown total for Gesicki in 2020 is just 4.5. I think this number is staggeringly low and worth jumping on before we inch closer to the regular season.

No matter what happens with Gesicki’s total catches and yardage props, the one area where he absolutely will not be giving up any targets is in the red zone. Gesicki was one of only four tight ends in the NFL last season to see double-digit targets in the end zone.

His six-foot, six-inch frame and rare athleticism make him the perfect target for any quarterback looking to put up six points when in the red zone. This is why over 4.5 touchdowns is my favorite Mike Gesicki 2020 player prop available.

You can follow me on Twitter @ChrisSmithPFN for upcoming analysis. Also, make sure to follow us @PFNBets for up to the minute analysis from all of our writers heading into the 2020 season.