Despite recent injuries, Albert Wilson could see a return to form in 2020

Miami Dolphins WR Albert Wilson saw limited opportunities in 2019, but he played well enough to indicate that he could finally reach his full potential in 2020.

Heading into the 2020 season, Miami Dolphins wide receiver Albert Wilson probably isn’t at the forefront of fans’ minds. However, it wasn’t so long ago that he was the most dynamic part of their offense.

Back in the early weeks of the 2018 season, he often seemed to win games by himself. Against the Oakland Raiders, he threw a deep touchdown pass to fellow wide receiver Jakeem Grant, and later high-fived him as they ran down the field for the game-sealing touchdown. Then, in Week 6, he almost single-handedly defeated the Chicago Bears, catching six passes for 155 yards and two touchdowns, evading Chicago’s entire defense along the way. He was on pace to have what would have been by far the best year of his career.

Unfortunately, that dream came to an end just one week later, when Wilson suffered a hip injury that ended his season. Wilson’s time in Miami was further derailed by a calf injury in Week 1 of 2019, resulting in a down season for him overall, only totaling 351 yards and one touchdown.

As a result, many fans might have pushed Wilson from their minds in favor of more recently successful players, like DeVante Parker, who finally seemed to live up to his potential in 2019, or Preston Williams, who was having a promising rookie year before tearing his ACL.

However, disregarding Wilson entirely would be doing him a significant disservice. When we take a closer look at how he played in 2019, it rapidly becomes clear that he quietly had a much better season than many might suspect.

Wilson’s OSM grade was one of the best in the NFL last season, which will hopefully lead to success in 2020

Wilson’s injuries and inconsistent play last season makes it difficult to evaluate how well he played. Fortunately, PFN’s Offensive Share Metric (OSM) grade, which measures how responsible a player was for the statistics they produced regardless of how many yards they gained or touchdowns they scored, is perfect for situations like these. And Wilson was one of the highest-graded wide receivers, with an overall grade of 37.36, which ranked eighth among all qualifying players at the position.

It’s important to note here that the OSM is not designed to determine whether one receiver is better in a vacuum than another. In other words, I’m not suggesting that Wilson was the eighth-best wide receiver in the NFL last season. Rather, it evaluates how effective and efficient the player was within their offense. And despite Wilson’s limited production, he performed exceptionally well according to that standard, an encouraging sign when looking ahead to 2020.

Explaining why Wilson’s OSM grade was so high

Delving into Wilson’s advanced metrics, it rapidly becomes clear why the OSM graded him so highly. To start with, he performed incredibly well on one of the most important statistics in calculating the OSM: separation. This statistic is important both because it gives the receiver more room to complete the catch and because it gives their quarterback an easier target to hit.

In 2019, Wilson averaged 3.5 yards of distance between himself and the nearest defender when the ball reached him. That number was tied for the second-highest among qualifying receivers, just 0.1 yards behind the leader.

Another critical factor in calculating a wide receiver’s OSM grade is their catch percentage. I shouldn’t need to explain why catching the ball is essential for wide receivers; even if they run a perfect route and get themselves wide open, all that effort will end up wasted if they don’t complete the catch.

That said, many wide receivers still struggle mightily in this area. Fortunately, Wilson was not one of them in 2019. He caught 69.35% of his targets, the tenth-highest percentage among qualifying wide receivers.

Putting these two statistics together, you get a player that gets himself open and catches the ball once it is thrown to him. That might not sound very special, but a player that can consistently do both of those things will always have a spot on an NFL roster. Even if Wilson never regains the explosive potential he put on display two seasons ago, he can still be a valuable offensive weapon in 2020 and beyond.

When looking at OSM grades, you will sometimes see players with relatively high overall grades who were also very inconsistent from game to game, with extreme highs and lows throughout the season. However, Wilson did not fall victim to this pattern. 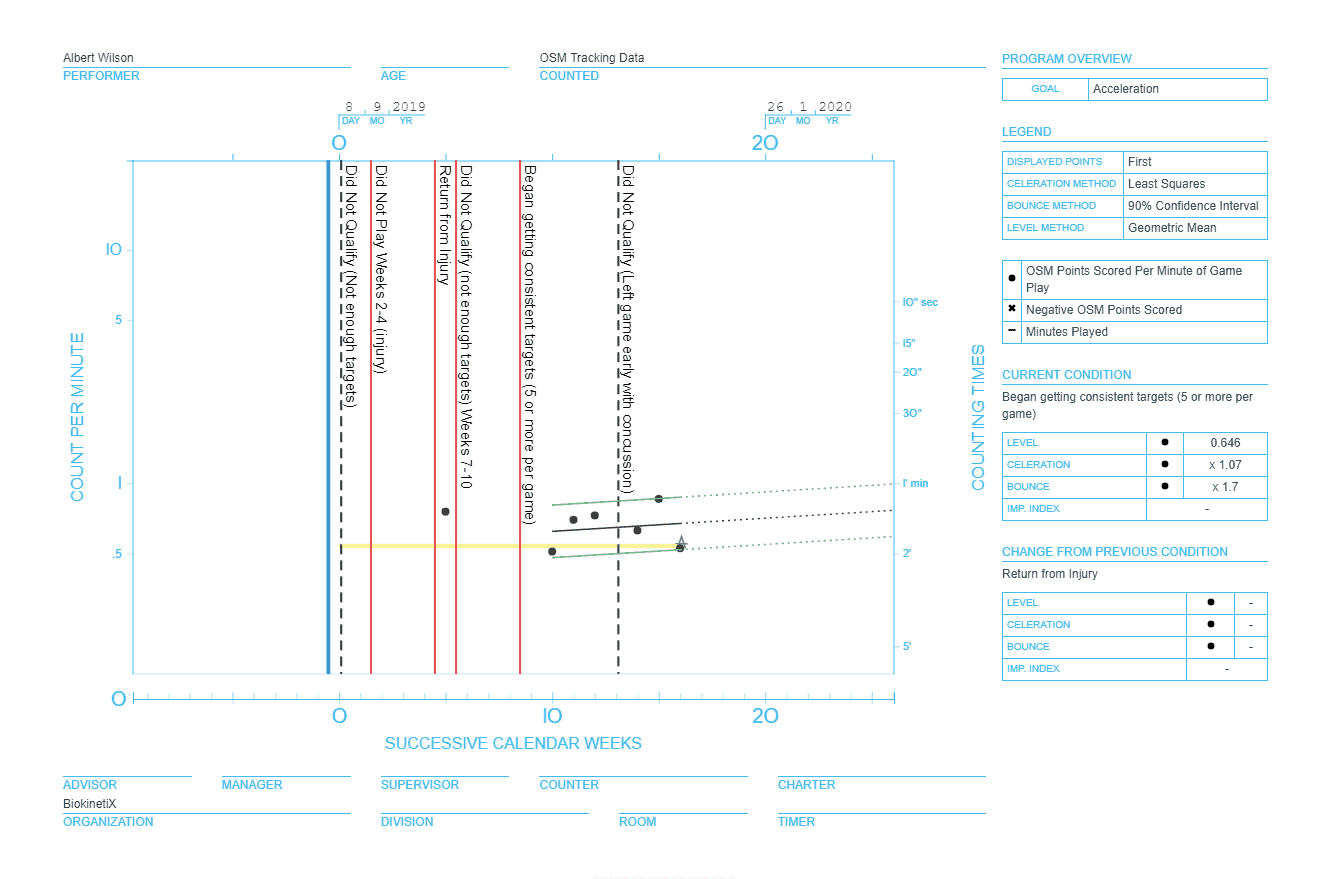 Because he was often either injured or recovering from injury, Wilson rarely got enough targets to qualify for a grade. However, when he did reach that threshold, which happened more and more as the season progressed, he was always either above the league average or just slightly below it.

In other words, even though Wilson’s statistics were limited by a lack of opportunity, when he was available to the offense, he was incredibly effective in that limited role.

Why 2020 could be Wilson’s best season in Miami

It might surprise fans to learn that Wilson is no stranger to OSM success. Here at PFN, we can calculate grades going back to 2016. Wilson’s performance that season was rather unimpressive; his grade of 34.68 ranked 26th in the NFL. However, the following year he improved dramatically, receiving a grade of 39.95, which led all wide receivers that season. Then, prior to his season-ending injury in 2018, he was once again performing exceptionally well.

He only qualified for a grade in four games, but three of them ranked inside the top ten among wide receivers during that given week. Putting all of that together, and it becomes clear that Wilson has a history of efficient play that adds value to his offense, something that might help him given Miami’s current quarterback situation.

While last season’s starting quarterback, Ryan Fitzpatrick, makes his living throwing 50/50 balls to big wide receivers like Parker and Williams, the quarterback of Miami’s future, Tua Tagovailoa (you might have heard of him), is better known as a precision passer. A quick, reliable receiver like Wilson could be perfect for him, much like Henry Ruggs III was at Alabama.

Assuming Tua starts at some point in 2020 (and I believe he will), Wilson could see a dramatic increase in his targets. And as we have seen over the last few seasons, he knows how to take advantage of his opportunities. If he can stay healthy, and maybe even regain some of that electric, playmaking potential he showed two years ago, 2020 could be the year we finally see Wilson operating at his full potential.