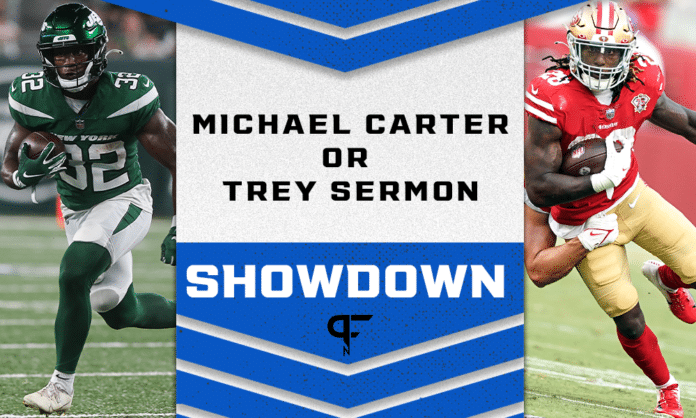 Michael Carter or Trey Sermon: Which rookie fantasy football RB should you target?

Two rookies looking to take over their backfields and fantasy football, which RB should you draft between Trey Sermon and Michael Carter?

A pair of rookie running backs looking to take over their respective backfields, fantasy football managers are finding themselves in the middle rounds needing to decide who to draft between San Francisco 49ers RB Trey Sermon and New York Jets RB Michael Carter. With drafts kicking off before the start of the 2021 NFL season, which RB should fantasy football managers select — Carter or Sermon?

Why you should draft Michael Carter in 2021 fantasy football leagues

Although he shared the backfield with Javonte Williams at North Carolina, Carter carved out a role for himself along with a great deal of hype.

During his senior campaign, Carter led the ACC in rushing with 1,245 yards and 9 touchdowns and finished second in the conference with 151.6 all-purpose yards per game. Furthermore, he led the nation with 18 rushing attempts of 20 or more yards.

In terms of skills translating to the scheme, Carter’s fit with New York might have been the best of any running back in the class. He was arguably the best wide-zone rusher in the draft and landed on a team that will run this same scheme with HC Robert Saleh and OC Mike LaFleur. The Jets also have the fourth-highest percentage of lost running back touches heading into 2021 at 54.2% (238). This also includes 35.7% of the carries inside the 5-yard line.

Carter will likely start the season in a committee with Tevin Coleman and La’Mical Perine, but he should quickly take over this backfield. Given his skills and scheme fit, Carter could be an RB3 in fantasy football once he takes over.

The case for Michael Carter over Trey Sermon

While the 49ers will be a better team, so is Sermon’s competition for touches. He has to get past Raheem Mostert, and then eventually, Trey Lance will be stealing touches.

These are not the Adam Gase Jets. This is an entirely new team with a revamped offensive line and a whole new philosophy. Coincidentally enough, it’s the same system that the 49ers ran while Robert Saleh and Mike LaFleur were there.

Carter also brings receiving upside that Sermon does not. In a PPR format, those extra points could be a massive difference over a whole season. When adding in the rushing work, Carter could be on his way to over 200 touches, with 40-50 of those coming in the passing game.

Why you should draft Trey Sermon in 2021 fantasy football leagues

In his three seasons at Oklahoma, Sermon rushed 339 times for 2,076 yards and 22 touchdowns, adding 36 receptions for 391 yards and 3 touchdowns. However, don’t let those numbers fizzle your confidence in him. He shared a backfield with two of the best dual-threat QBs to come out of college in Kyler Murray and Jalen Hurts. He then transferred to Ohio State in the most tumultuous offseason ever, coming off an LCL tear, no less.

While it took time for him to win over the coaches as the starter and to trust his own body, Sermon was utterly sensational. Starting with his game against Michigan State, Sermon had three straight 100-yard rushing games, including a 331-yard performance against Northwestern in the Big Ten Championship and 193 yards on 31 carries against Clemson in the CFB Playoff semifinals.

While Sermon may not rattle off 100-yard games to begin his career, he has a fantastic opportunity. Head coach Kyle Shanahan is one of the best play-calling coaches in the NFL and known to ride the hot hand. Still, when you factor in Mostert’s injury history (played in 16 games just once and is already dealing with a back injury), Sermon could quickly be the lead back in the committee.

While Sermon will not be an RB1 this season, we could see him in the RB2 range multiple times. As an eighth or ninth-round pick, Sermon is a great value that should only increase as the season goes on.

The case for Trey Sermon over Michael Carter

For as talented as Carter is, how much more improved will the Jets be in 2021? Unless Zach Wilson pulls a Justin Herbert on a vastly less talented team, they are going to struggle. And when you struggle, the first thing that goes out the door is the running game. That will not be a concern for Sermon and the 49ers.

The NFC West is the most challenging division in football, and the 49ers are one of the front-runners to walk out with the division crown. If they do so, it will come at the hands of Shanahan’s play-calling prowess and the rushing attack. Since 2012, his offenses have finished inside the top 5 four times in rushing and only once outside the top 13. When you add that the 49ers have averaged 441.5 rush attempts per season, the primary RB will be a very valuable commodity in fantasy football.

With Mostert already dinged up and having missed 38 games over his five-year career, Sermon could be the breakout RB in fantasy football. He is equally as talented as Carter but in a far better situation.

Which RB should you draft in fantasy football between Trey Sermon and Michael Carter?

I think both players have similar upside in 2021, and I am not the only one. They are going back to back in Sleeper drafts as the RB32 and RB33.

If I were to give the edge to one or the other, I would lean Sermon. He has the better team, play-caller, and an offense that can only get better once Lance is under center. As for Carter, he has a rookie QB starting Day 1 and a brand new coaching staff all trying to learn on the fly. Don’t get me wrong, I like Carter a lot and have him on several teams, but the safer fantasy football RB pick would be Sermon.