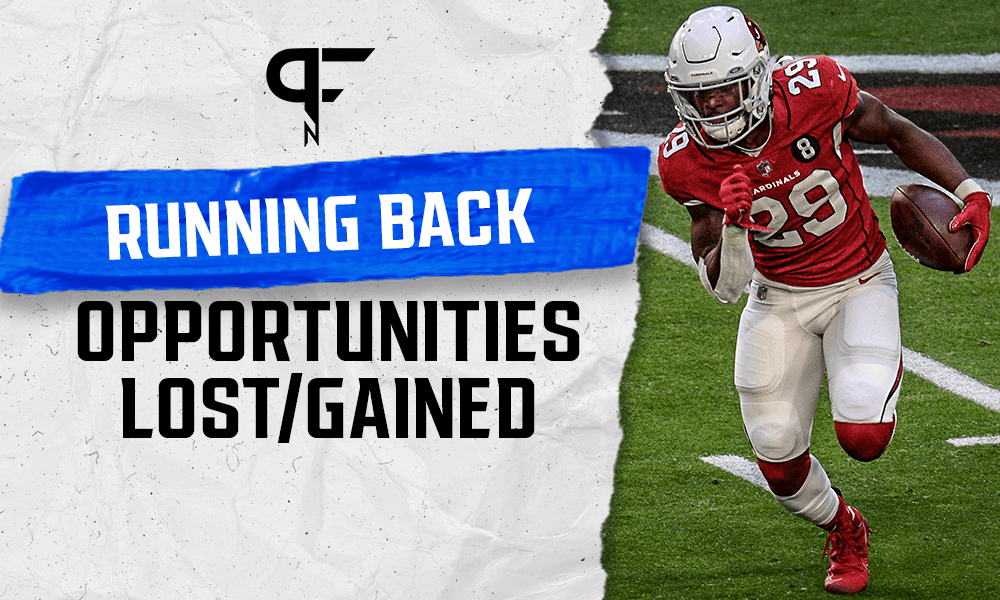 When deciding who to target and avoid in fantasy football, looking at which running backs gained or lost touches could sway a decision.

One of the best ways to find potential value or breakouts for the upcoming fantasy football season is by examining backfields and their unaccounted or vacated carries. Going over all 32 NFL teams and seeing which running backs lost or gained touches begins to paint a clearer picture of which backfields to target and which to fade in upcoming drafts.

Here are the vacated touches for every backfield entering the 2021 season.

Which running backs are in favorable situations heading into 2021?

Now that we have all of this data, who are some running backs that possibly gained touches along with fantasy value?

While Davis was a surprise in 2020, that won’t be the case in 2021. With Christian McCaffrey missing all but three games last season, Davis became a massive value as he inherited the RB1 role in Carolina. As a first-time starter, he turned 165 carries into 642 yards and 6 touchdowns. Davis also showed value as a receiver, catching 59 of 70 targets for 373 yards and 2 more scores. In the 12 games Davis started, he averaged 15.18 points per game and ended the year as the RB12 in PPR.

Now with the Falcons, Davis has a massive opportunity in front of him. He steps into a backfield with 88% of its carries vacated along with 72.4% from inside the five-yard line (21). On what should be an offense that rushes more under head coach Arthur Smith, Davis should gain more touches than nearly any other running back in the NFL. He could end up being an incredible value on draft day (RB36 on Sleeper and RB29 on NFC).

While the offseason hype surrounding Chase Edmonds following the departure of Kenyan Drake has died down a touch, there is reason to be optimistic. There are concerns that Edmonds could share a majority of his carries with James Conner, but that might not be the case. PFN’s NFL Insider Adam Beasley reported on July 7, “the Cardinals’ training camp battle at running back might be a battle in name only.”

Edmonds averaged 4.6 yards per carry and caught 53 passes in 2020, both first among Arizona running backs. He was by far more efficient on his touches, averaging 1.02 fantasy points per touch to Drake’s 0.73. There is also the concern of Conner from an injury aspect. The best way to keep him on the field might be to keep him off of it.

A critical component of this is that the Cardinals enter 2021 with 72.4% of the red-zone carries up for grabs. Although I do think Kyler Murray could snag a few, Edmonds could exceed expectations by gaining the majority of these touches.

Let’s play a name game. You tell me to stop when I say the name of a running back who deserves an ample workload. Ready? Kalen Ballage, Benny Snell, Anthony McFarland Jr., and Jaylen Samuels. If you remained silent, you are correct and won yourself a rookie breakout candidate by the name of Najee Harris.

Okay, jokes aside, Harris has an incredible opportunity in 2021. Not only do the Steelers have 45.3% of their carries vacated, but there is a total lack of skill at the position that will push Harris for touches. No one should be surprised if he averages between 18 to 20 opportunities per game in 2021. I’d love to selfishly project him for 99% of the running back touches, but he isn’t Derrick Henry, so this will have to do.

The combination of Jamaal Williams and Tyler Ervin averaged 10.5 touches per game last season. It’s a reasonable assumption that A.J. Dillon sees nearly all of that workload in 2021. It’s still the Aaron Jones show, but so long as Aaron Rodgers returns, 9 to 10 touches on a high-powered Packers offense is a valuable commodity in fantasy.

I bring them up as an example that numbers need context behind them. While the Giants and Panthers have a metric ton of carries available (294 and 213), that is only because Saquon Barkley and Christian McCaffrey missed the majority of 2021. You can ignore these teams as both RBs will resume their typical workhorse roles come Week 1.

Who are some running backs that might have lost carries heading into 2021?

Not all offseason moves end up being positive for a player’s workload. These running backs likely lost touches in 2021.

With Phillip Lindsay leaving in free agency, Melvin Gordon was arguably my favorite value at the running back position. The Broncos signed running back Mike Boone, but Gordon appeared primed to receive 16 to 18 touches entering the new year. But then the NFL Draft hit, and the Broncos selected Javonte Williams.

Williams is a bruising running back out of UNC who will eventually take over the Broncos’ backfield probably sooner than we think. While Gordon might be worth a start early on, his touches and snap share will steadily decrease until he has lost most of his value as a fantasy running back.

What if I told you that David Johnson was way better than you thought last season? He was the RB19 with a 13.6 ppg average. Furthermore, he was an RB2 or better in nine of 12 games. However, things quickly change in the NFL.

Most fantasy managers are already fading the Texans in general, given the uncertainty at quarterback. Still, the backfield is a mess. Not only did they sign Phillip Lindsay in the offseason, but they also brought in veteran Mark Ingram. It’s hard to imagine a path where Johnson will match his 16.1 opportunity average from the previous season. He has lost as much value as a running back through touches as he has due to the logo on his helmet.

Despite having the third-most carries (273) and the second-most touches inside the red zone (64), Josh Jacobs saw his value plummet after the Raiders signed Kenyan Drake. Even if you don’t believe Drake is anything more than a JAG or a backup, that doesn’t matter. The only thing that matters is what the Raiders think of him. Based on the two-year, $11 million contract, I’m going to say they like him quite a bit.

For fantasy, this stinks as Jacobs was one of the few players you knew would receive all the work they could ask for every game. Unfortunately, with the addition of Drake, Jacobs has lost a sizeable chunk of that volume and goes from being an RB1 to hovering around RB2/RB3 consideration.

The Eagles have made it abundantly clear they will operate with a committee-style approach once again next season. It was always frustrating if you were invested in Miles Sanders. He has all the talent but averaged 16.3 opportunities through his career, with 115 of those coming in the receiving game. That is unlikely to improve in 2021 as they signed Kerryon Johnson in the offseason and drafted Kenneth Gainwell.

Another reason to add Sanders to the list of running backs who have lost opportunities in 2021 is Jalen Hurts. It’s bad enough when it is just RBs, but when you add a dynamic QB like Hurts into the mix, the likelihood of Sanders returning value diminishes even more. In his limited work over five games to close the season (three starts), Hurts rushed 51 times for 301 yards and 3 touchdowns. That yardage was the second-most among QBs during that stretch. Sanders now has to deal with that for an entire 18-Week season.