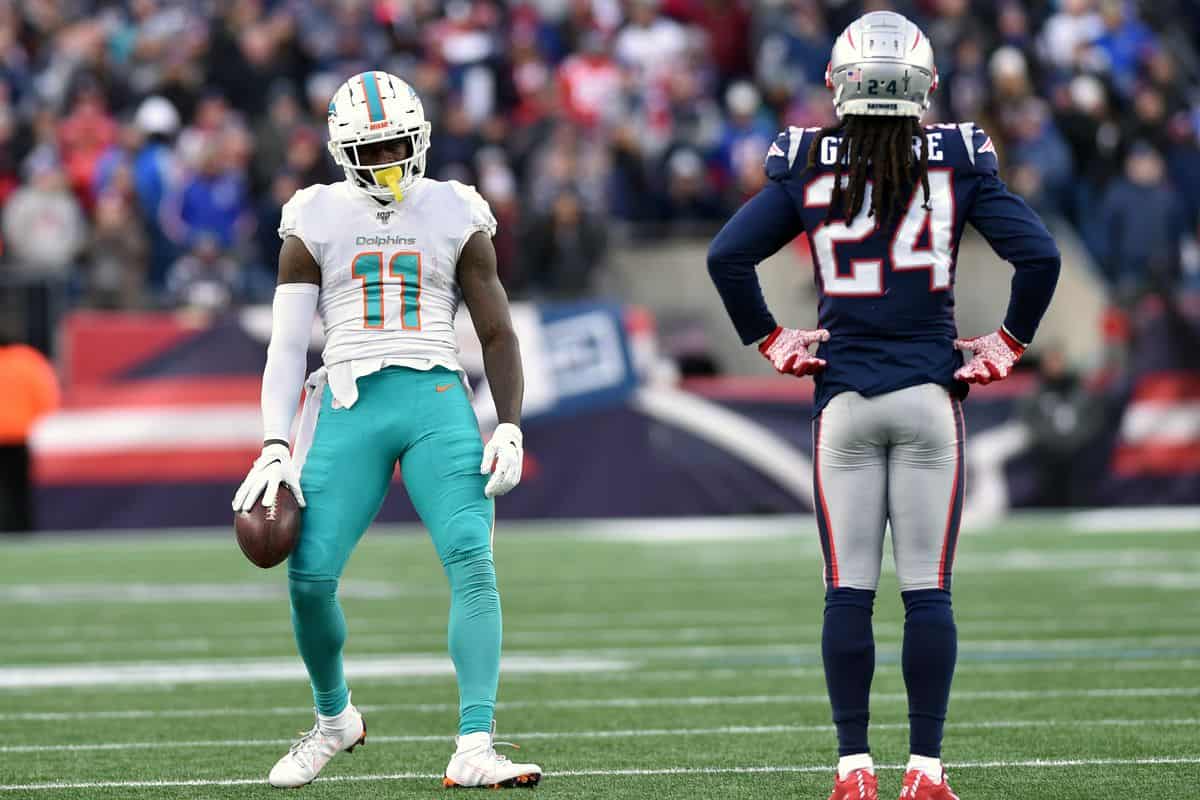 Photo Credit: USA Today
What's in this article? Click to show
Three keys to the game for the Dolphins vs Patriots Week 1
DeVante Parker needs to repeat his Week 17 performance from last season
The young offensive line will need to grow up quickly
Avoid costly turnovers against the top defense from the 2019-2020 season

The time has come, at last, Week 1 of the NFL season is finally upon us. We are just a few days away from the start of an incredible journey and another glorious chapter in a proud Miami Dolphins franchise history. Under head coach Brian Flores, this team is a revamped and revitalized unit looking to stake their claim as one of the surprise contenders in the AFC in 2020. They have added some serious talent this offseason and look as focused as ever heading into the first game of the season. In this article, we will break down three of the biggest keys to the game that could lead to a victory for the Dolphins when they take on the New England Patriots in Week 1.

That treacherous battle for supremacy begins in the familiar confines of Foxborough, Massachusetts, against the most hated of rivals. Although the Dolphins have struggled against the Patriots, the story remains to be written for the 2020 season. The Patriots have moved on from long-time quarterback Tom Brady and are now being led by former number one pick, Cam Newton. What will the Dolphins have to do in order to be able to come out on top?

Patriots’ star cornerback Stephon Gilmore was an absolute nightmare for opposing wide receivers in 2020. He collected six interceptions, and 20 passes defensed on his way to Defensive Player of the Year honors. However, the story was slightly different when Gilmore faced off with Dolphins’ receiver DeVante Parker in Week 17 last season.

While wrapping up a breakout 2019 season, Parker faced Gilmore in a highly anticipated divisional matchup. The Dolphins shocked the world and defeated their bitter rivals to knock them out of the running for one of the top two seeds in the AFC playoff race. In that game, Parker bested Gilmore in a head-to-head matchup with eight catches on 11 targets for 137 yards.

When the Dolphins travel to Foxboro this Sunday, Parker will need a repeat performance if the Dolphins want to come out on top. Gilmore has undoubtedly heard enough about this matchup and will try to shut Parker down and get the Patriots off to a good start at home. The winner of this grudge match could decide their team’s fate and set the tone early in 2020.

The young offensive line will need to grow up quickly

As I’ve discussed previously, the Dolphins offense was woeful last season, especially when it came to running the football. The team ranked dead last in terms of rushing yards and tied for a league-high with 3.6 sacks allowed per game. To combat these issues, Miami spent multiple resources this offseason to shore up the offensive line. Those resources could be a vital key to victory in the Dolphins’ game against New England on Sunday.

Related | What potential impact could the Miami Dolphins practice squad have in 2020?

The Dolphins signed Washington free agent guard Ereck Flowers and former New England center, Ted Karras. Both players are projected to start right away against the Patriots. Miami also used multiple 2020 NFL Draft picks to select USC tackle Austin Jackson (Round 1), Louisiana tackle Robert Hunt (Round 2), and Georgia guard Solomon Kindley (Round 4). Kindley and Jackson are also expected to join the starting lineup early on. These additions mean this unit will look much different in 2020, and hopefully perform at a much higher level.

They will be tested early on against a New England defense which ranked in the top-eight with 47 sacks as a team in 2019. With at least two rookie starters and four newcomers overall, this line will need to grow up and gel quickly if the team is to have success early on. A new up-tempo style of the offense being implemented under Chan Gailey should help matters, and the offense will undoubtedly be more exciting to watch moving forward. The improvement of the Dolphins’ offensive line is arguably the most important key to the game for Miami.

The Dolphins were bottom-eight in terms of giveaways last season behind a putrid offensive line and a rotating door at the quarterback position early on. For comparison’s sake, the Patriots ranked second overall in takeaways last season with 36 in total, including a league-leading 26 interceptions and a whopping 11 fumbles recovered.

We have already discussed the offensive line upgrades and the Dolphins as a whole looks more balanced this season. Quarterback Ryan Fitzpatrick will start his 13th straight regular-season game and lead a much-improved offensive unit. In addition to the improvements along the offensive line, the running game has also received a jolt with newcomers Jordan Howard and Matt Breida.

Experience is critical at the running back position, and these new additions for the Dolphins should help cut down on the number of turnovers during the game. As with any NFL game, if the Dolphins can win the turnover battle on Sunday, they have a chance to shock New England and start the 2020 campaign 1-0.