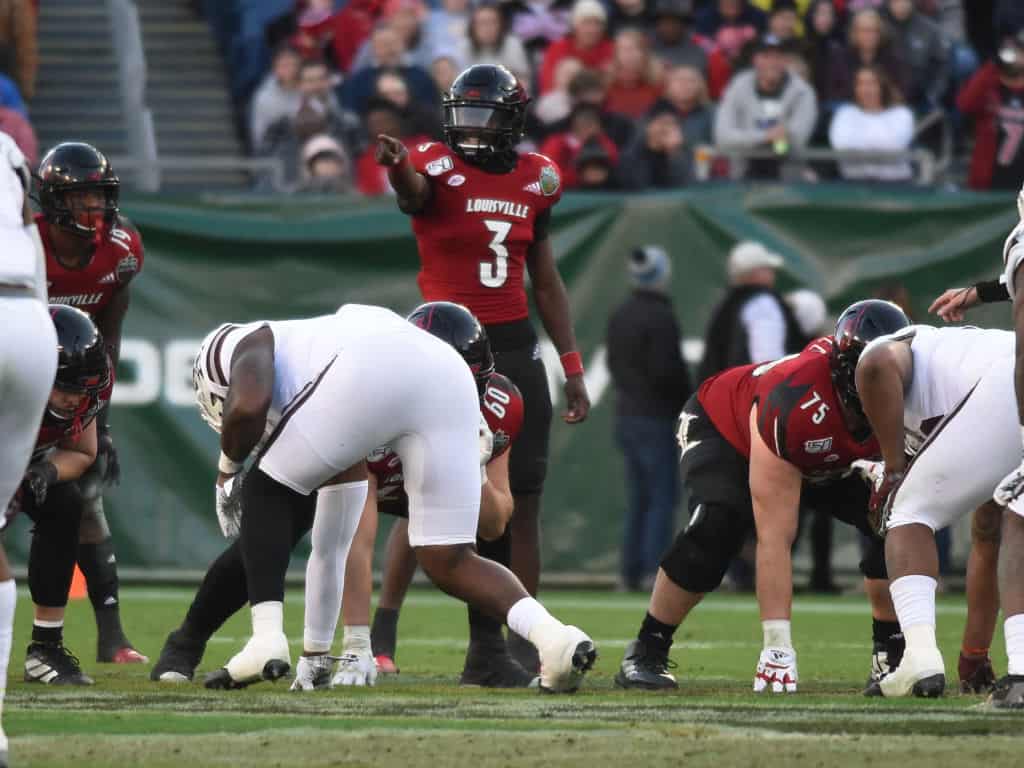 NASHVILLE, TN - DECEMBER 30: Louisville Cardinals Quarterback Micale Cunningham (3) points out a coverage during the Franklin American Mortgage Music City Bowl between the Mississippi State Bulldogs and the Louisville Cardinals on December, 30, 2019, at Nissan Stadium in Nashville, TN. (Photo by Jeffrey Vest/Icon Sportswire via Getty Images)
What's in this article? Click to show
Cunningham the solution to the Cardinals quarterback quandary
Does a strong start for Cunningham raise his NFL Draft stock?
Areas for improvement and NFL Draft outlook

Despite the defeat against the Miami Hurricanes in Saturday night’s primetime game, Louisville Cardinals quarterback Malik Cunningham continues to raise his NFL Draft stock with some strong performances to start the season. Could he be a sleeper at the position in the 2021 NFL Draft?

Under Scott Satterfield, Louisville has become one of the most exciting teams to watch in college football. The team is bursting with explosive offensive weaponry, from the diminutive wide receiver Tutu Atwell to the elusive running back Javian Hawkins.

It is a far cry from the team that Satterfield inherited from the short-lived Bobby Petrino era, which ended when Louisville went 2-8 in 2018. The Cardinals suffered a quarterback hangover that year, struggling to replace the unique skillset of Lamar Jackson after his first-round selection by the Baltimore Ravens in the 2018 NFL Draft.

Cunningham the solution to the Cardinals quarterback quandary

Louisville was lackluster behind Jawon Pass, but the solution to their quarterback quandary was on the roster all along.

Cunningham arrived in Louisville in 2017, a three-star recruit out of Park Crossing High in Montgomery, Alabama.

An Alabama Mr. Football Finalist and Public School Player of the Year after leading Park Crossing to a 13-1 record in his senior year, Cunningham showcased his dual-threat abilities with 6,276 passing yards and 71 touchdowns with a 63% completion percentage, while adding 1926 rushing yards and 32 touchdowns on the ground.

The dual-threat quarterback chose the Cardinals over reported offers from SEC schools Georgia, LSU, and Kentucky while Georgia Tech and Purdue were other “Power Five” schools that pursued the talented playmaker.

Cunningham redshirted 2017 and took the year to learn behind the 2016 Heisman winner, Jackson. Once Jackson left, however, Cunningham was used primarily as a rushing threat. In seven of his ten appearances in 2018, Cunningham rushed for more yards than he threw and led the team in rushing yards with 497 yards at 6.3 yards per carry.

Cunnigham’s emergence as a quarterback came with the appointment of Satterfield. He beat out Pass and Evan Conley for the starting job in 2019 and threw for 2065 yards at an impressive 11.6 yards per attempt. While Cunningham remained a threat on the ground, with 482 rushing yards and 6 touchdowns, his abilities as a passer were evident.

Cunningham set the school record for passer efficiency and became the first Cardinals quarterback since Jackson to throw five touchdowns in a game when he torched Syracuse in a performance that earned him ACC and Manning Award Quarterback of the Week honors.

Despite performances like that in 2019, Cunningham entered the 2020 season as a college football quarterback who had never thrown for 300 yards or more in a game. He was clearly an exciting football player but could Micale or Malik, Cunningham be considered an NFL Draft quarterback prospect?

Does a strong start for Cunningham raise his NFL Draft stock?

Cunningham has started the campaign strongly, and I believe he has increased his NFL Draft stock already, even though it is early in the season.

He opened up with 343 passing yards and three touchdowns, with one interception, in a 34-19 opening game win over Western Kentucky. The Hilltoppers are not going to send too many defensive players to the NFL Draft, but it was an impressive display by Cunningham and his first 300 yard game through the air.

Miami will send defensive players to the NFL and have several highly rated defensive prospects, such as Quincy Roche and Jaelan Phillips. Even in defeat, Cunningham put up 307 passing yards, with another three touchdown passes, with a 72.2% completion percentage.

We shouldn’t focus on completion percentage

Although there have been shorter passes mixed into Cunningham’s game in 2020, with 9.3 yards per attempt versus 11.6 in 2019, there were multiple examples during the Miami game where Cunningham placed the ball beautifully on intermediate and deep balls where only his receiver could get it. He is particularly impressive delivering a deep ball while coming under pressure in the pocket, showing poise even with pressure in his face.

Cunningham has shown good vision and decision making early in this season, with one play against Miami, in particular catching the eye. Late in the first quarter, Atwell had drawn the cornerback, creating space that Cunningham saw, exploited, and delivered a perfect ball to Dez Fitzpatrick. It would have been easy to get the ball to Atwell for a short gain quickly, but Cunningham’s vision resulted in a bigger play.

He also uses that decision-making and vision to good effect on the ground. Combined with his speed and elusiveness, it makes him a dangerous playmaking threat and allows him to make big plays when the pocket breaks down. Although he recorded just seven rushing yards in the box score, some big runs were masked by being taken down well behind the line of scrimmage.

Like any player in just their second season as a starter, there are areas for improvement in Cunningham’s game.

His accuracy is a work in progress, which was evident against Miami as he missed a touchdown opportunity on a poor throw to a wide-open receiver.  Despite showing good decision making, there are times when he could get rid of the ball rather than taking a sack.

The 2021 NFL Draft quarterback class is rife with talent, led by the likes of Trevor Lawrence, Justin Fields, and Trey Lance. Although Cunningham hasn’t received much in the way of early hype, if he continues to develop while leading Louisville to another successful season, he will soon appear in the conversation.

After a strong start, Cunningham’s NFL Draft stock is rising.