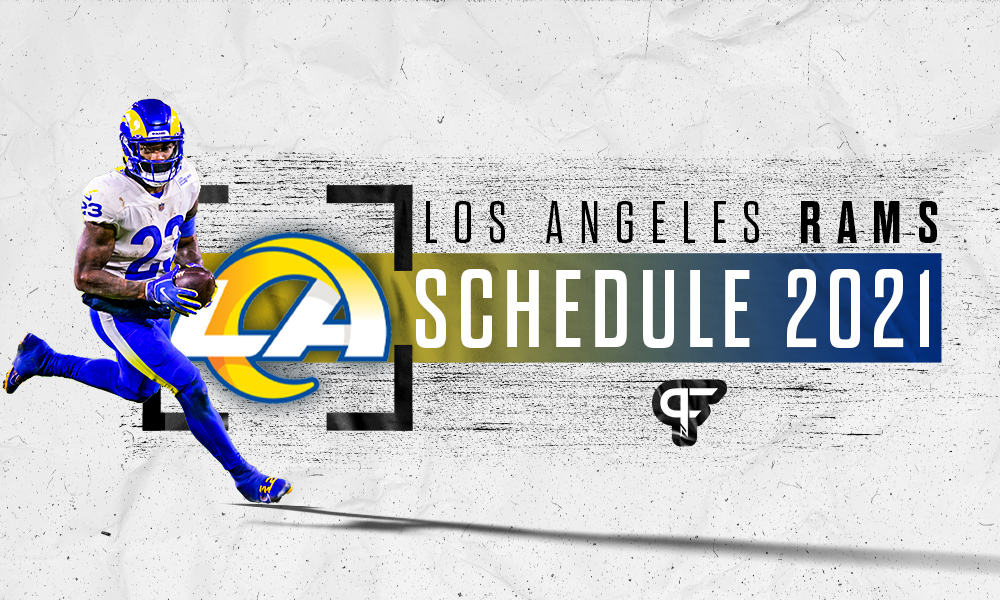 What is the Los Angeles Rams’ 2021 NFL schedule, how many times will we see them in primetime games, and who are the toughest and easiest opponents on their schedule?

How many primetime games do the Rams play in 2021?

When is the Rams’ bye week?

The Rams head into the 2021 NFL season tied for the 10th hardest run of games in terms of strength of schedule, according to Vegas projected win totals. Their road schedule is slightly more difficult than at home, but both are in a similar range. With a stout division in the NFC West, which games are the most difficult, and which are the least on their schedule?

Overall, the Rams’ 2021 schedule is very widespread in terms of their opponents. They play six games against teams projected to win over 10 games, with four of those on the road. Their two other games come at home against the San Francisco 49ers and Tampa Bay Buccaneers. Meanwhile, on the road, they have the 49ers, Green Bay Packers, Indianapolis Colts, and Baltimore Ravens.

The 49ers have been a challenging team for Sean McVay in the last two seasons. Kyle Shanahan has had McVay’s number, defeating the Rams in all four contests. However, the last three have all been decided by eight points or less. Los Angeles and McVay will be hoping the addition of Matt Stafford can change the tide in 2021. However, the wildcard for the Rams is the potential impact of Trey Lance on the 49ers’ offense this season.

San Francisco has been dealt an unlucky hand with their “17th game.” Finishing second in your division should mean you face a slightly easier opponent. However, Los Angeles will face the Ravens, who are projected to win 2.5 games more than the Pittsburgh Steelers who finished first. The Ravens dominated the last matchup between the two teams, and the Rams will be looking to exact revenge.

The games against the Buccaneers and Packers also stand out. The Rams defeated Tampa Bay last year, but then the Buccaneers went on to win the Super Bowl. The Packers eliminated the Rams from the playoffs last season. Still, their next matchup will be considerably less difficult if the Aaron Rodgers situation means he is not on the field for Green Bay in 2021.

The Rams’ 2021 schedule contains four games against teams projected to win seven games or fewer. The easiest of those is the Houston Texans, who have endured one of the most turbulent offseasons in recent memory. The other three games come against the Chicago Bears and Jacksonville Jaguars. Both of those could see the Rams facing rookie QBs in Trevor Lawrence and Justin Fields.

Battling the Lions is especially intriguing. With former Rams QB Jared Goff on the Lions, and former Lions QB Stafford now playing for the Rams, that game will have some added elements. Los Angeles should have the talent to overcome Detroit, but those revenge-style games can produce weird and wonderful outcomes.

The Rams will be hoping that their change in QB leads to them making the playoffs for the fourth time in five years. Switching up the most important position following that kind of consistent regular-season success leaves the head coach and front office open to criticism. A tougher-than-average schedule for the Rams in 2021 may lead to questions being asked at the end of the year.

Los Angeles will need to take advantage of those “weaker” out-of-division games they are scheduled at home. If they stumble in a couple of those, it could be extremely detrimental in their playoff hunt. Yet, sweeping those four contests and performing well in the division might put the Rams on track for a high seeding in the NFC.