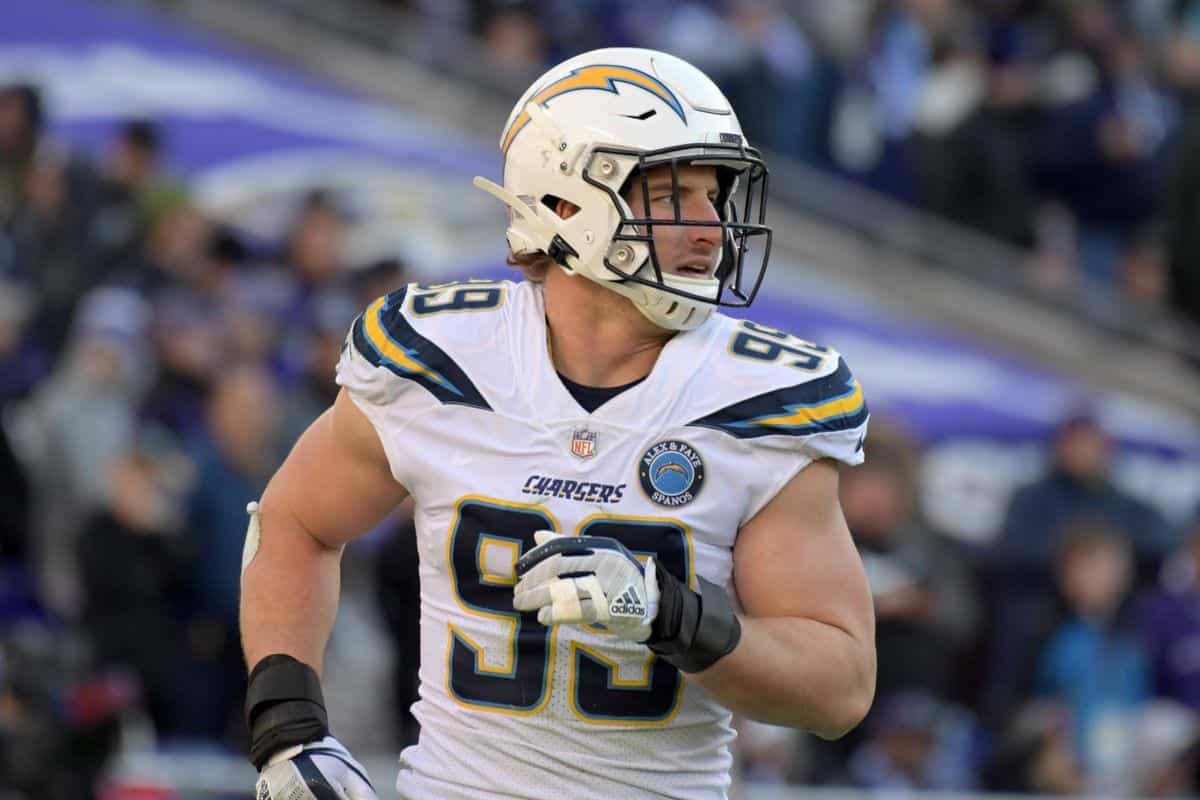 The Los Angeles Chargers have spent the last few years working to build a sustainable foundation of players for the future. While there are still a few key veterans, such as Philip Rivers and Melvin Ingram, in the building, general manager Tom Telesco and company have done a great job injecting youth into the roster.

Below is a list of the top 5 players under the age of 25 for the Los Angeles Chargers. Guys like Melvin Gordon (26 years old) and Keenan Allen (27) are essential pieces, but they barely missed the mark due to age.

Hunter Henry’s 2018 season was one to forget. The former second-round pick suffered a torn ACL during a May practice, which prevented him from suiting up for a live game until late in the season. Overall, Henry was only on the field for 14 snaps last season.

To see the full capabilities of the Arkansas product, you have to look at his first two seasons in the NFL when he had a combined 81 receptions go for 1,057 yards and 12 touchdowns. At 6-foot-5, 250 pounds, Henry possesses a balanced skill set that allows him to move defenders in the run game and get open in the passing game.

Henry won’t turn 25 until December, making him an obvious choice for this list. With no clear-cut No. 3 option for Rivers, Henry could see a lot of work in 2019.

Mike Williams has dealt with health issues during his time as a football player. A neck fracture at Clemson almost ended his career prematurely, but Williams persevered. Then, back issues during his NFL rookie year slowed down his development again.

If 2018 was any indication, fans are in for a treat when it comes to the 6-foot-4, 220-pound specimen. Williams was a red zone nightmare for opposing defensive backs, hauling in double-digit touchdowns during his second season with Los Angeles.

With Tyrell Williams moving on to Oakland, expect the former No. 7 overall pick to see a much larger target share in Year 3. It’s hard to imagine defensive coordinators trying to scheme against both Williams and Henry when the Chargers are in striking distance.

When Desmond King dropped to Los Angeles in the fifth round of the 2017 draft, there were a lot of draft pundits who labeled him a steal. So far, those pundits were right.

King hasn’t just been an impact player as a slot corner. He also earned first-team All-Pro honors as a return specialist after putting up 840 total yards (522 kick return, 318 punt return) and a touchdown. The 24-year old is versatile enough to line up at safety as well, making him a valuable chess piece for Chargers defensive coordinator Gus Bradley.

With four interceptions (two returned for a touchdown) already under his belt, the third-year defensive back is quickly becoming one of the more underrated defenders in the NFL.

Like with a few of the other players on this list, Joey Bosa hasn’t always been available during the season. Whether it was a holdout or a foot injury, the former No. 3 overall pick has missed 13 regular season games in three years.

With that said, the oldest Bosa has been outstanding when he’s been on the field. In the regular season alone, he’s racked up 28.5 sacks in 35 career games while also adding five forced fumbles. As it sits, the Miami (Fla.) native holds the record for most sacks (19) through the first 20 games of his career.

The soon-to-be 24-year old did have somewhat of a down year in 2018, but there’s no reason to believe that he won’t return to his All-Pro caliber level.

Derwin James is only going into his second season as a member of the Los Angeles Chargers. That hasn’t stopped the Florida State Seminole from proving he’s the top player on the roster under the age of 25.

James is one of the most physically gifted defensive players in the entire league. He’s big (6-foot-2, 215), athletic, and most importantly, versatile. Here is the snap breakdown for James in 2018, according to The Draft Network’s Jordan Reid:

Adding that level of versatility to any defense instantly gives it a sizable advantage. Considering James will only be 23 years old in August, it’s easy to see why he’s considered one of the NFL’s top up-and-coming players, regardless of position.

How did the rest of the league let him fall all the way to No. 17?