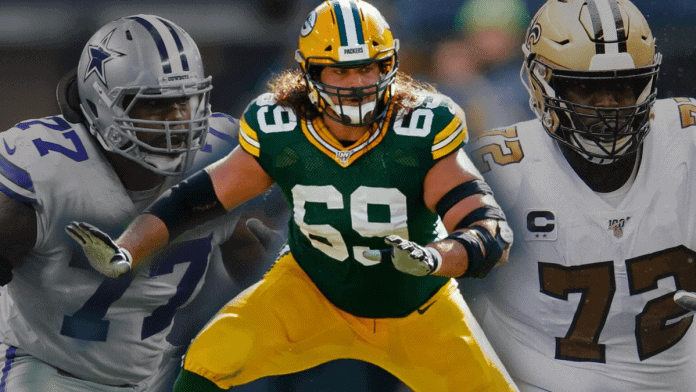 The top 25 NFL offensive tackles heading into the 2020 season

Last week, PFN Draft Analyst Brad Kelly ranked the top 25 wide receivers in the National Football League. The piece was such a success that we’ve decided to list the top athletes in other positions as well. I’ll be ranking the offensive line by position and am ready to start off by taking a look at the league’s best offensive tackles.

The NFL has a wealth of diverse offensive tackle talent. Two players come in at the ripe age of 38 while the youngest player on this list is just 23 years old. A number of players under 25 made the list as well.

When ranking these players I looked at a number of things. The first, above all else, is there consistency? How good is a player down to down, game to game? After that, I evaluated them as pass protectors. First focusing on the technique of their hands then the movement of their feet. Finally, I judged them as run blockers. How much movement do they generate off the line of scrimmage and how well do they locate players in space? The league has developed into a pass-first mindset, so naturally pass protection comes first.

Related | Top 25 quarterbacks in the NFL

Obviously there are more than 25 quality offensive tackles in the NFL as there are 64 starters alone in the league. So for this list, there will be no players listed from either the 2019 or 2020 draft classes. The 2019 class showed promise, but none were good enough the entire year to warrant consideration. Meanwhile, rookies have yet to play a snap in the NFL and therefore have no business on a list like this.

Additionally, although last year’s rookie class had some impressive players, no one stood out enough to be placed in the top 25. I’ve also accumulated an honorable mention of five tackles that just missed the cut. Without further introduction, here are the top 25 offensive tackles in the NFL and a handful of honorable mentions.

Top 25 offensive tackles in the NFL

Jason Peters is not the player he used to be. However, he’s still a quality left tackle who’s technique has been mastered over the years. Peters should find work somewhere where he can boost an offensive line in desperate need of left tackle help. A team like the Washington Redskins or Jacksonville Jaguars could make a ton of sense.

Jack Conklin was given a relatively large contract to improve Cleveland’s tackle play. While I think he’s an upgrade over who they had, I still view it as a bit of an overpay. That being said, with the selection of Jedrick Wills in the 2021 NFL Draft, the Browns tackle duo is looking like a significant upgrade overall. Conklin is a dominant run blocker, but still has lapses in pass protection. Hopefully, he can clean up his consistency in Cleveland under legendary OL Coach Bill Callahan.

Perennially set back by injuries, I think people don’t realize how good Taylor Decker has been when healthy. Sadly, he’s not commonly healthy. His motor constantly runs hot and he’s strong as both a pass protector and run blocker. However, he must continue to improve his consistency and find a way to stay healthy.

Braden Smith was someone I really enjoyed pre-draft. However, like many others, I thought he may be better suited for the interior. While that could potentially remain true, Smith has done a really nice job as the Colts right tackle. Smith is a mauler in the run game with excellent natural power but he still struggles with speed rushers from time to time.

#Colts Running Back Marlon Mack was rolling on Saturday. Slides around the great block by Braden Smith then two sick jump cuts in the open field. Looking like the Colts future at RB more and more each week. pic.twitter.com/O53Mt7QwtA

Duane Brown is entering this season at 35 years old, but he’s still playing quality football for the Seahawks. Seattle traded a second and fifth-rounder for the services of Brown and they’ve received strong value on their end. Brown isn’t the All-Pro he once was in Houston but he’s done a respectable job protecting Russell Wilson’s blind spot.

As I mentioned in the introduction, consistency is a major factor in how good an offensive lineman is. Bryan Bulaga has demonstrated that time and time again. Whether it be playing though injury or playing his best games against players like Khalil Mack, Bulaga has been a model of consistency for a decade protecting Aaron Rodgers. Now, as a member of the Chargers, he’ll look to extend an already impressive career.

Isaiah Wynn was a first-round selection for the Patriots in the 2018 NFL Draft. He, unfortunately, lost his rookie season to a torn Achilles. He returned last year and, despite only starting nine games, showed that he could develop into one of the league’s top tackles. He’s a strong athlete and already plays like a polished pro. He’s a strong pass protector and growing as a run blocker. Come this time next year, Wynn could find himself in the top 10 of this list.

A strong pass protector and an above-average run defender, the Temple product has developed into a very good player for the Buffalo Bills. Dion Dawkins was selected with the second to last pick in the second round of the 2017 NFL Draft. Many thought he was raw but also possessed the tools to be an average to above-average tackle in the league. He is already reaching that stage and it will be interesting to see how Dawkins continues to progress. He’s also been known to find the end zone as a receiver now and again.

After having one of his most impressive seasons in 2018, Andrew Whitworth took a step back in 2019. Despite being one of the oldest players in the NFL, Whitworth is still producing strong tackle play. His technique is near flawless after nearly 15 years in the NFL.

Hopefully, Whitworth and the rest of Los Angeles can have a bounce-back year as they will look to contend in a very competitive NFC West. Whitworth has been one of the top NFL offensive tackles for the majority of his career and is a true model of consistency.

After being selected sixth overall in 2014 NFL Draft, there were high expectations for Jake Matthews as he was expected to be the Falcons’ franchise tackle for the next decade or more. It took a while, but Matthews has finally become the stand-up left tackle the Falcons were hoping for when they selected him. Matthews uses his athleticism to both stone wall speedy edge defenders, and get out in space and make devastating blocks.

Trent Brown always had loads of potential with his massive frame and natural athletic ability but things just weren’t clicking in San Francisco. He was then traded to the New England Patriots where he played the best football of his career.

Brown possesses some of the best length in the entire NFL and he maximizes it in pass pro. He also has a stout lower body and natural push which he demonstrates as a run blocker. Brown is worth every cent the Raiders give him as he leads a very impressive offensive line for the silver and black.

The Ravens committed a robbery when they selected Orlando Brown Jr. with the 83rd pick in the 2018 NFL Draft. Brown had a catastrophic combine that plummeted his draft stock but the Ravens saw a technically refined player with rare length and natural power at the point of attack.

Brown has done nothing but improve for Baltimore and has developed into one of the top right tackles in the NFL at only 24 years old. He and teammate Ronnie Stanley make up one of the best tackle duos in the NFL.

When Andrew Luck retired, the Colts as a team seemed lost. This was an understandable reaction to abruptly losing your franchise quarterback. However, one thing that stayed constant was the play of Anthony Castonzo.

Whether in pass pro or run blocking, Castonzo displayed an elite level of consistency. One of the more unheralded left tackles during his time, Castonzo deserves more praise for the consistent above-average play on the blindside of the Colts offensive line.

La’el Collins had a bit of a strange start to his career. He was viewed as a first-round talent in the 2015 NFL Draft but had some unfortunate off-field drama that ended up leaving him an undrafted free agent. He signed with Dallas and started as a guard.

He then moved to right tackle where he has developed into one of the top players in the NFL at the position. He’s a strong pass protector and one of the best-run blocking tackles in the NFL. He possesses both impressive athletic ability and natural power at the line of scrimmage.

Mike McGlinchey was a bit of a surprise when the 49ers selected him in the top 10 of the 2018 NFL Draft. He’s technically refined, possesses excellent length, and is an impressive athlete for his size. Whether he’s 50 yards down the field, or kick-sliding to the backfield, McGlinchey is making an impact on every play.