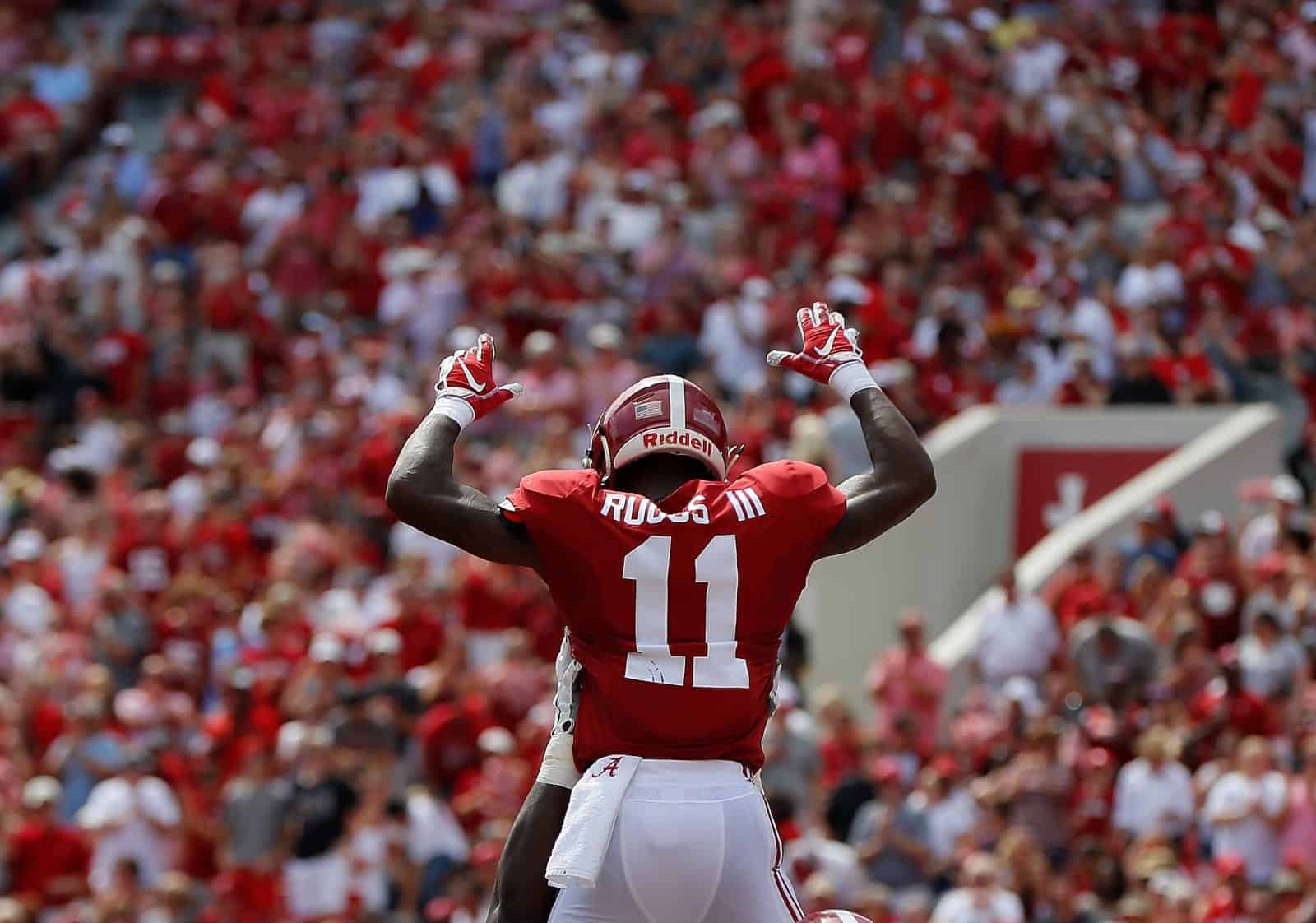 The 2020 NFL Draft has come to a close, and it’s finally time to evaluate and grade the outcome of every team’s draft class. The Raiders only ended up making seven total selections, but they had five of those picks in the top-100. They then rounded out their draft with two fourth-round selections. The 2020 Raiders draft grades will be based on the value of the players the selected, the need addressed, and the players still available on the board. So who did the Raiders select, and what grades do they receive for their class?

Who did the Raiders draft?

Henry Ruggs III was my highest-graded player drafted by the Raiders. Despite lacking production in college, it’s easy to project him to the NFL. With true 4.2 speed, Ruggs profile best as an electric play-maker. He’ll likely never have a season of 100+ receptions, but neither have players like Tyreek Hill or DeSean Jackson.

Jackson and Hill have individually each only had one season where they registered over 80 receptions. If Ruggs can become the difference-maker Jackson or Hill have been in their career, then the pick will have been well worth it.

Ruggs has true difference-maker speed. At Alabama, he lacked targets due to the amount of talent on the roster. However, when targeted he made the most of his opportunities. Averaging nearly 18 yards per receptions, he was also able to score a touchdown once every four touchdowns. The Raiders desperately needed a spark plug in their offense to pair with the grinding run game led by Josh Jacobs.

Seeing as the Raiders didn’t have any selections after round four, it was somewhat difficult to choose the best value. However, that doesn’t mean they weren’t able to find value in their selections. Especially with their choice of Bryan Edwards with the 81st selection.

Edwards could have easily been justified as a second-round talent. He was ultra-consistent in his career at South Carolina. He had over 500 receiving yards in his freshman season, and over 750 yards in each of the next three years.

Edwards comes into the NFL as a quality route runner who wins in contested catch situations and is an impressive YAC threat as well. He’s not an amazing athlete, but he has the requisite explosiveness to get in and out of route breaks, and his large frame makes him difficult to take down.

The Raiders will likely roll out with Tyrell Williams as the starter at the “X” receiver position, but don’t be surprised if at some point in his rookie season Edwards takes over.

The Raiders announced Tanner Muse as a linebacker when they selected him, which likely indicates what they plan to do with him in the NFL. Muse for the majority of his career in college played safety, and the move to linebacker should actually be good for him if he can add a bit of weight.

Muse was a mid-late day three player in my eyes. He lacks hip flexibility and struggles in man coverage. As a WILL linebacker for the Raiders, this weakness can be mitigated. He’ll need to add weight and play strength in the NFL before he can make a consistent impact in the run game.

After signing Cory Littleton in free agency, Muse’s skill-set seems a bit redundant, and I’m not sure I see a path to consistent playtime in his rookie campaign. However, the Raiders’ weakness at linebacker could prove to be too massive to keep Muse off the field.

Yes, I listed a first-round draft pick as the team’s biggest sleeper. Why? Because there are people who think this was a massive reach. I’m here to tell you, it wasn’t. In fact, I think the selection of Damon Arnette was better than both the Falcons selection of AJ Terrell and the Dolphins selection of Noah Igbinoghene.

Arnette was my CB5, and the only reason most thought he could be available on day two and three were some character concerns at Ohio State.

No one is gonna confuse Arnette with a burner, that’s not his game. He’s a technically efficient and aggressive cornerback. He has a long frame and is a factor in both the pass game and the run game.

He’s at his best when asked to use his instincts and play with a receiver in front of him. He can struggle with quicker and shiftier wide receivers, but I could see Arnette having the most impactful season of any rookie cornerback (only because the talent Detroit already has at cornerback makes it more difficult for Jeff Okudah.)

The Raiders had a number of picks in the top-100, and while I like most of the players they selected, the value was questionable due to the options still on the board. I liked Ruggs as a prospect, but to me, there was a clear gap between him and CeeDee Lamb or Jerry Jeudy.

I also don’t think the quarterbacks that Las Vegas currently possess (Derek Carr and Marcus Mariota) are the right players to take advantage of Ruggs down the field, as both are relatively conservative passers.

Arnette was obviously they’re guy, but I thought Jeff Gladney and Kristian Fulton were both superior players. On the second day of the draft, they selected Muse, who I viewed as a mid-day three talent, and they took John Simpson over a number of interior offensive lineman I had rated higher. Although, I’m admittedly lower on Simpson than the consensus.

The Raiders did a good job addressing their pressing needs like wide receiver and cornerback. However, I struggle to see their thought process on a number of picks. That being said, I do think they did a good job drafting high upside players, they just weren’t the top players at their position available. This draft could provide the Raiders a number of starters, but how will the players they passed on fair?