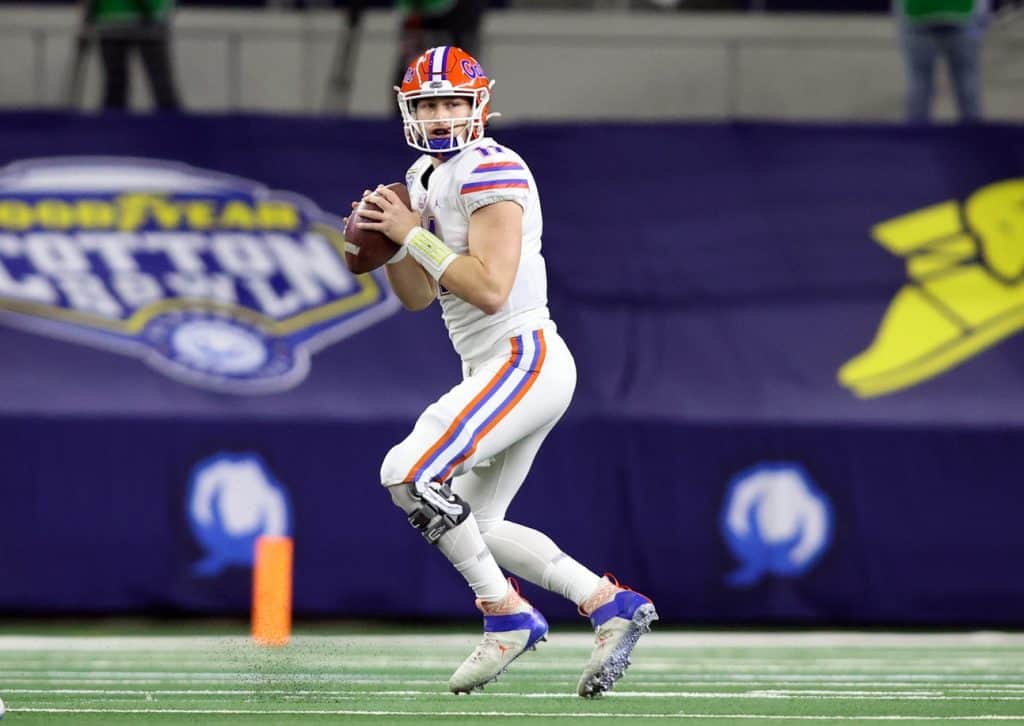 Few teams have the luxury of entering the NFL Draft with minor overall needs. Yet, that’s the situation the Tampa Bay Buccaneers found themselves in this past April. Bruce Arians’ squad won the Super Bowl in February, and in March, they managed to retain most of their top-level talent in free agency. That roster maintenance allowed them flexibility a month later. In Round 2 of the 2021 NFL Draft, the Tampa Bay Buccaneers selected Florida quarterback Kyle Trask. Already, he’s in a great spot, but did he get the best draw out of the top QBs?

Before 2020, Trask had never been a full-time starter. He famously served as the backup at Manvel High School and served as Feleipe Franks‘ backup early in his career as a Gators quarterback. Even in 2019, although Trask started most of the games that year, Franks was the season-opening starter. If Franks remained healthy, it’s worth wondering if Trask would have been given a chance at Florida at all.

Nevertheless, Trask earned his opportunity. He played well in relief of Franks, and in 2020, Franks transferred to Arkansas, leaving Trask as the unquestioned starter for the Florida Gators. He would proceed to earn a spot as a Heisman finalist, completing 301 of 437 passes for 4,283 yards, 43 touchdowns, and 8 interceptions.

While Trask’s production was historic, it wasn’t enough to boost him into the Round 1 conversation. Questions persisted regarding his arm talent and athleticism, in spite of his statistical prowess. Still, Trask was ultimately the first quarterback selected outside of the first round. The Buccaneers chose Trask with the 64th overall pick. In doing so, did they tab him as the heir apparent to Tom Brady?

Rather than pick Trey Lance or Justin Fields, Pauline went off the beaten path and chose Trask as the newly acquired QB for the Buccaneers.

“I’m gonna shock everybody. I’m gonna say Kyle Trask, to the Tampa Bay Buccaneers, at the bottom of Round 2. He’s a perfect fit for the system. Bruce Arians likes those types of quarterbacks. He’s not a guy that you’re going to have to shove into the starting lineup. He’s going to be able to learn behind Brady. He is going to be in a winning environment, which he was in, to a certain extent, at Florida. It’s up another notch [in Tampa Bay].”

In Tampa Bay, Trask will have more time and less pressure to succeed

Pauline went on to further explain his reasoning behind selecting Trask as the QB in the best position to succeed. The Chief Draft Analyst for PFN views Trask as an excellent fit for Arians’ aggressive passing system, and he also likes how Trask will have more freedom and flexibility with his timeline, related to the first-round quarterbacks.

Of course, there’s always heightened pressure for quarterbacks sitting behind Brady, even if they aren’t drafted in Round 1. Over the past decade, QBs like Matt Cassel, Brian Hoyer, and Ryan Mallett have all been referred to as potential starters at different points, simply because of their connection to Brady. We know how they worked out.

Now that Trask has been picked in Round 2, at some point, onlookers may expect the Brady magic to rub off on him. And if Trask does eventually become Brady’s successor, he’ll be thrust into the spotlight once again. His leash may be shorter since he’s a Day 2 pick instead of Round 1. There’s a delay in pressure, but it’s no doubt there.

Regardless, Trask is in a good position to stay poised amidst pressure

There may soon be expectations that Trask will have to match. For now, however, he can take solace behind Brady on the depth chart. At some point, Brady will hit the cliff. But it wasn’t last year, and it might not be 2021, either.

In March, Brady signed a contract extension that will keep him in Tampa Bay at least through 2022. He turns 44 years old in August, but for now, he isn’t showing signs of slowing down. 2020 was one of his better seasons to date, and the Buccaneers have the supporting cast necessary to extend his career.

While the Buccaneers compete for more Super Bowls behind Brady, Jason Licht has ensured that they have a stable succession plan in place. For a team that didn’t have many needs, it was a sensible use of a second-round pick. Although there is more pressure on Trask than what meets the eye, he won’t have to face it right away. And that’s what truly counts.

Be sure to follow us on Twitter (@PFN365) to stay in the loop on all things around the NFL. Also, continue to visit Pro Football Network for NFL news and in-depth analysis for the 2021 season and beyond.