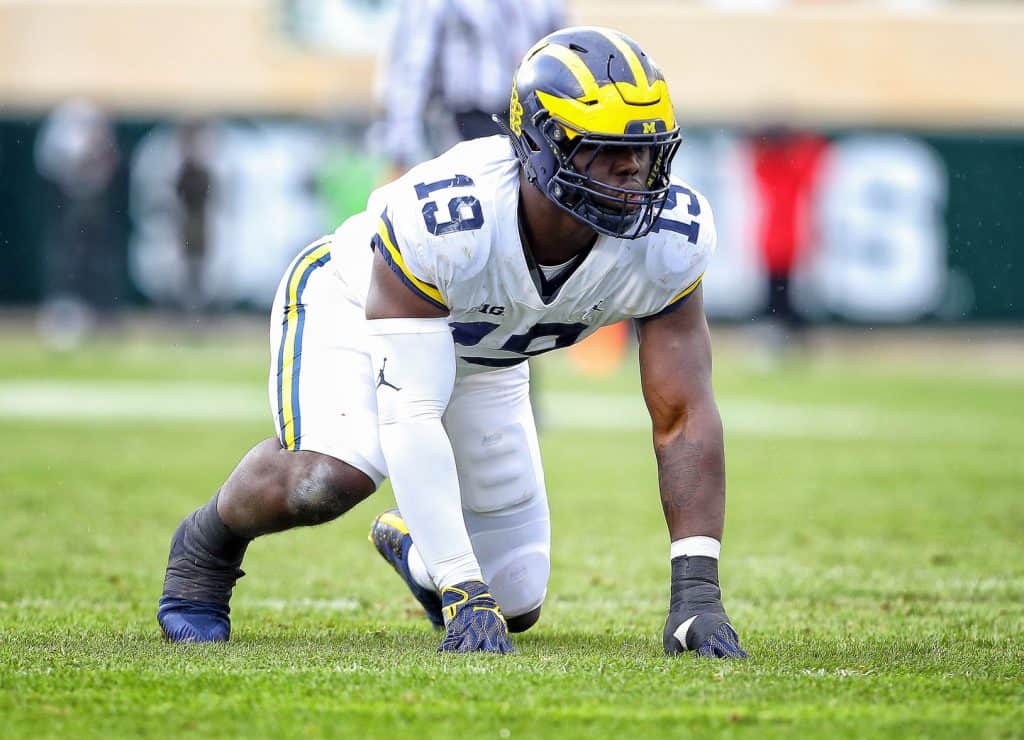 Michigan’s Kwity Paye has incredible tools. His workout numbers are jaw-dropping, but the fact that Paye ran a three-cone drill at under 6.5 seconds is just absurd. And that is a drill that translates extremely well to on-field success for edge rushers in the NFL. Few cornerbacks or wide receivers are able to master that drill as Paye did. Let’s analyze Paye’s 2021 NFL Draft projection — could he be the No. 1 DE in a volatile pass-rushing class?

Paye isn’t real tall for the position and has a thick and somewhat compact build. However, he is obviously very powerful and has good arm length. Paye also plays with nice bend, leverage, and pad level. But while Paye is loaded with upside, he has a lot of work to do with his pass-rush arsenal and overall plan of attack in this capacity.

Paye’s production at the college level leaves you wanting more. Michigan didn’t really do him any favors by lining Paye up all over the defensive front when they probably should have just left him rush off the edge. Nonetheless, there is a lot of work to be done here. That being said, any defensive line coach would love to work with Paye and his immense skills, and Paye does work very hard.

The Michigan DE is in contention to be the first edge defender off the board. On the other hand, he is also battling with a handful of other prospects at his position for that illustrious distinction. Paye is a first-round pick without question, but where he falls in the first frame could vary depending on how each team values upside and athleticism vs. what the player can do in his first season in the league. But, without question, Paye did himself a great favor with his pro day performance.

While not an exhaustive list, let’s examine a few of the NFL landing spots where Paye could thrive.

The No. 11 overall pick seems a little early for Paye, but you can’t blame a team for falling in love with his traits. Plus, Dave Gettleman (and this organization overall) certainly put a premium on front-line players on both sides of the ball. New York has a big need for an edge pass rusher, and if they can’t land someone like Rashawn Slater at 11, Paye could be the pick.

The Eagles defense has often been built around a strong defensive line. Therefore, it would not be a surprise to see them target a pass rusher early in the 2021 NFL Draft. According to a recent report by Pro Football Network’s Chief Draft Analyst and NFL Insider Tony Pauline, the Eagles love Paye “and view him as a clone of another former Wolverine – Brandon Graham.” Derek Barnett is playing on his fifth-year option and a stable of pass rushers is always a valuable asset to have.

In 2020, the loss of Danielle Hunter was really felt in Minnesota. Hunter is a great player and is set to return, but the Vikings were much worse on the defensive side of the ball last year than they were on offense. A guy like Alijah Vera-Tucker could certainly be in play for Minnesota with the 14th pick, but Paye very well could be the defensive end they target if they go that direction.

Left tackle is a big need for the Colts, and there could be a suitable player available at No. 21 to fill that need. They also could look at cornerback or edge rusher on defense. Indianapolis has some pass rushers in place. They could bring Paye along somewhat slowly, not asking him to log a high number of snaps to start his career. This could be a great developmental landing spot for Paye.

The Titans have certainly addressed their poor pass defense this offseason. Could they keep that trend going by adding Paye? That could be the case, and Tennessee might be wise not to entirely count on Bud Dupree to fix their ailing pass rush. Plus, Paye could give the Titans a threatening athletic trio with Dupree and Harold Landry on passing downs to get after opposing quarterbacks.

Keep Reading! Who is the best defensive player in the 2021 NFL Draft?