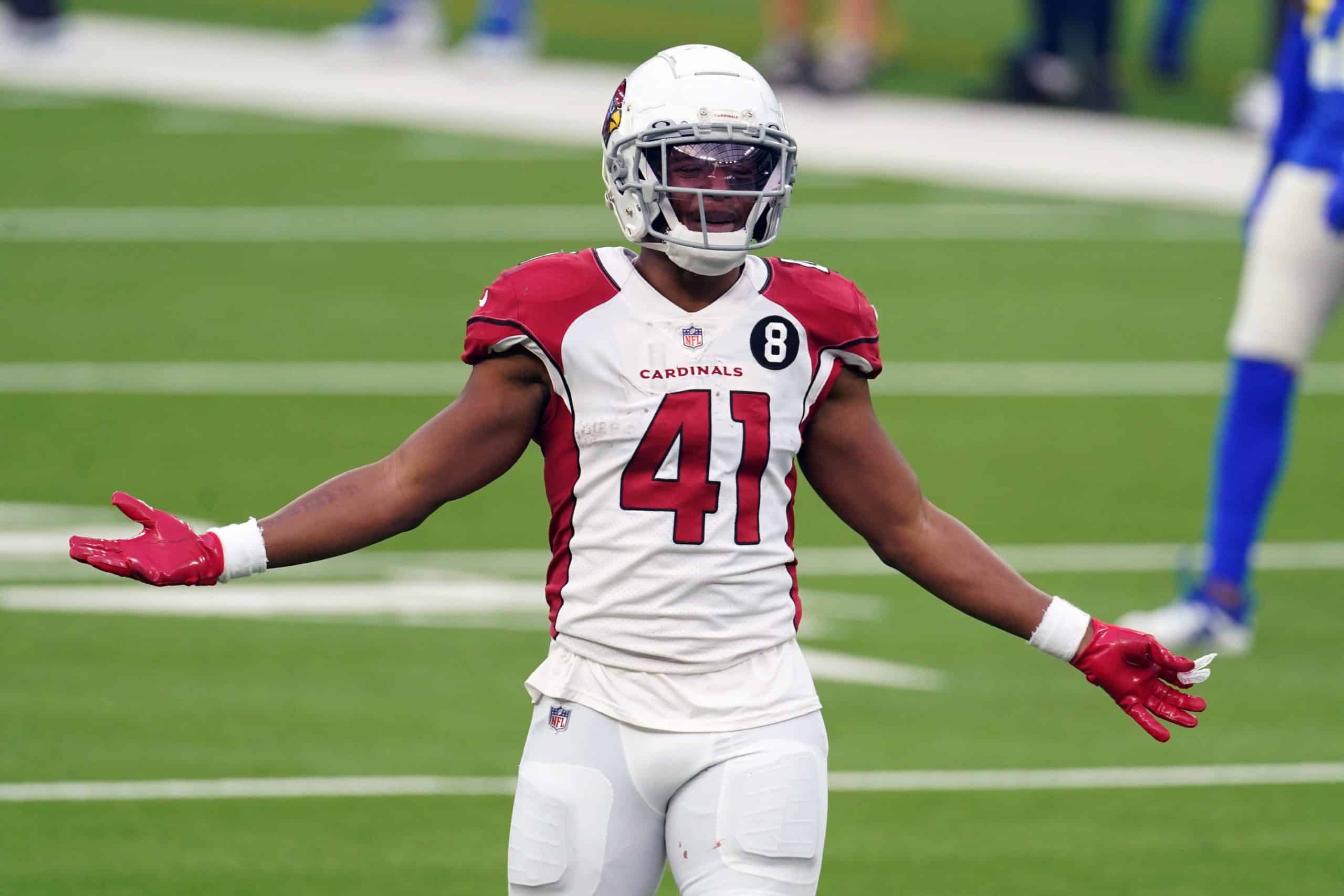 With NFL free agency quickly approaching on the horizon, Arizona Cardinals RB Kenyan Drake could very well be looking for a new landing spot next week. After a year and a half of mixed results in Arizona, Drake could look to fill a vacancy on a new team in 2021.

A standout performer in 2019, Cardinals RB Kenyan Drake underwhelmed in 2020

Taken in the third round by the Miami Dolphins in 2016, Kenyan Drake escaped the after-effects of Adam Gase halfway through the 2019 season. While most go to Arizona to relax, Drake was all about his work and turned out one of the best second halves in recent memory.

The Cardinals felt Kenyan Drake fit their offense perfectly and ended up trading David Johnson heading into the 2020 season, leaving Drake as the lead back. Unfortunately for both sides, Kenyan Drake was never able to capture the same magic.

The saving grace for Drake in 2020 came with his 10 touchdowns. He also saw his passing work decreased, seeing only 31 targets, catching 25 for 137 yards.

From an efficiency standpoint, Chase Edmonds was the sparkplug for the Cardinals. While he saw 114 fewer touches, he was just 224 scrimmage yards behind Drake, thanks to his 5.7 yards per touch average compared to Drake’s 4.1.

Throw in Edmonds’ increased usage and the NFL’s unwillingness to pay running backs going into their second contract, and Kenyan Drake is set to begin the process of finding a new landing spot once free agency opens up.

Because of this, teams will be cash-strapped and have to make difficult decisions regarding veterans and how bullish they can be in free agency. The one position that will have the most significant impact is the running back position. With the NFL moving towards more committee-style approaches, fewer players are getting bell-cow contracts despite their talent.

Also, Kenyan Drake has never been a true workhorse-style RB. In the modern NFL, he has the skill set to be a perfect complement to another back while knowing that if anything happens, the team will have a legitimate RB1.

As he hits free agency, where are some potential landing spots for Cardinals RB Kenyan Drake in 2021?

I know I said all of that about them being ready to move on, but at the same time, is Edmonds really who they want to hitch their wagon to? According to Spotrac, Arizona has $21.87 million in cap space, and Drake’s estimated market value is $8.3 million on a two-year, $16.71 million contract.

Running back is a position of need for the Cardinals. And honestly, this is not a great running back class outside of Aaron Jones and Chris Carson. I expect the Cardinals to add someone in the draft, but it depends on how much capital they invest.

There is still a chance the Cardinals end up being the landing spot for Kenyan Drake once free agency wraps up. While they chose not to tag or extend him, letting him test the market could result in a lower contract cost if he finds the market to be a bit bare given the reduced salary cap.

I think we can all agree that Todd Gurley is not coming back to Atlanta, leaving the position in limbo. Head coach Arthur Smith wants to have a rushing attack, and they could be a landing spot for Kenyan Drake.

The hard part of this scenario will be the spending space. The Falcons still are $7.60 million over the cap and need a massive overhaul of the defense.

I bring these two teams together because they are both 99% likely to select a QB in the draft. If that is the case, a rookie QB will benefit from a rushing attack.

Between these two teams, no question the Jaguars are already in the better position. James Robinson had a sensational year, but they have come forward saying they want to bring in more RBs.

As for the Jets, well, Frank Gore was their leading rusher in 2020. That should tell you all you need to know. Kenyan Drake could be a great fit in the Shanahan wide-zone attack the Jets will implement under Mike LaFleur.

Aaron Jones is hitting free agency, leaving A.J. Dillon to take over the lead role in Green Bay’s offense. If Matt LaFleur believes they need another complementary back, it is hard to do better than Kenyan Drake.

Drake can work out of the backfield and has the speed to rip off a long run. The Packers took A.J. Dillon high in last year’s draft in preparation for losing Jones. Green Bay as a landing spot for Kenyan Drake gives the Packers a great thunder and lightning backfield.

It will take a combination like this to make up for the massive hole Aaron Jones is leaving behind. But to make this happen, the Packers need to navigate their way out of the $8.26 million hole they are in right now.