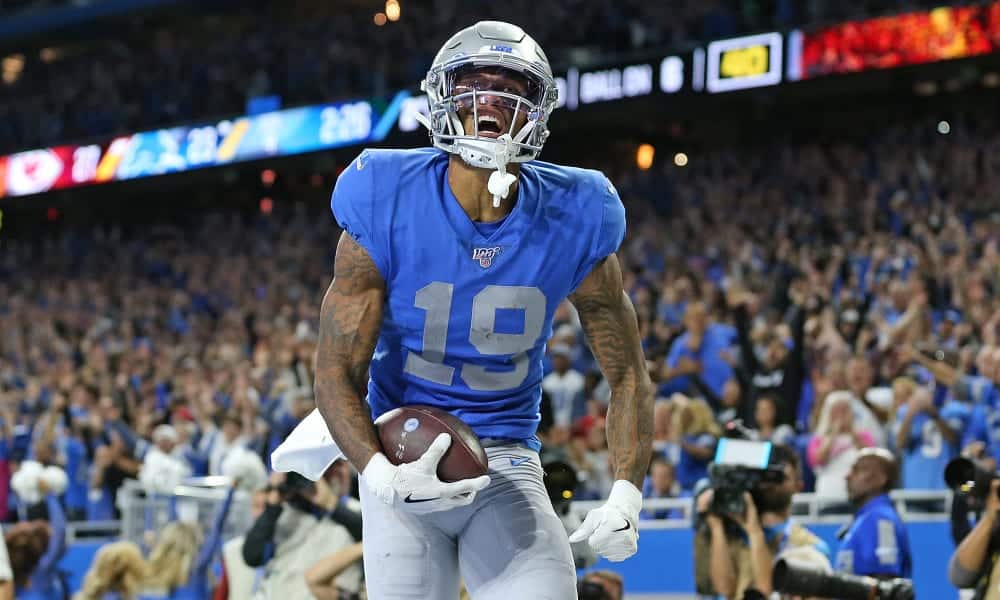 2020 Pro Bowl selection Kenny Golladay is a dynasty beacon of hope for players willing to gamble. Finishing PPR leagues as the number nine wide receiver at 26 years old, he is entering the prime of his career. He demonstrated consistency in his first full season starting, scoring double-digit fantasy points in all but four appearances, and crossing a 14 point threshold in 10 games this year.

The Detroit Lions provided us with one of the best fantasy football stars in Calvin Johnson. As Golladay was dubbed “Baby Megatron” as a rookie, it seems things in that vein are starting to take shape. We’ll take a look at the two most impressive plays made in Golladay’s two most impressive games.

3rd and 10 down 7-0, we see the Lions draw up a play designed to take advantage of Chicago Bears cornerback Prince Amukamara (#20) being left on an island. Golladay sets things up at the beginning of his route, sells the fake with a nifty bit of craftsmanship in the form of a head fake, and puts his foot on the gas at the end, providing QB David Blough all the room necessary for a stat-padding throw. This game, in Week 13 (where many teams fight for a playoff spot), Golladay had his second-best fantasy performance with 4 receptions for 158 yards, and the previously-witnessed touchdown adding up to 25.8 PPR points.

We take it back to Week 8 and see the Lions coming out of a 3rd and 2 no-huddle play. Golladay puts every fiber of his 6’4, 214-lb frame into making the catch and getting his feet down. No fancy film breakdown here, just a grown man playing bully ball against rookie cornerback DeAndre Baker (#27) who is giving up a whopping five inches and 30+ lbs to Golladay. These are the types of plays you expect to see when dialing up the Northern Illinois prospect in the red zone. Thanks to a trick play thrown in for good measure, this was Golladay’s biggest fantasy game of the season. He hauled in 6 of 8 targets for 123 yards and two touchdowns totaling 28.3 PPR points.

In going through his film, Golladay’s speed pops more than one would expect from a guy his size. It’s akin to how Julio Jones looks like he’s playing the game at a different speed than everyone else around him. Golladay’s break against the Bears is a prime example of this, but it shows up again and again.

Kenny Golladay entered 2019 dynasty leagues as an intriguing player to acquire. He left it as a surefire every-week starter and a strong option for teams looking to compete for a championship for the next 3+ years.