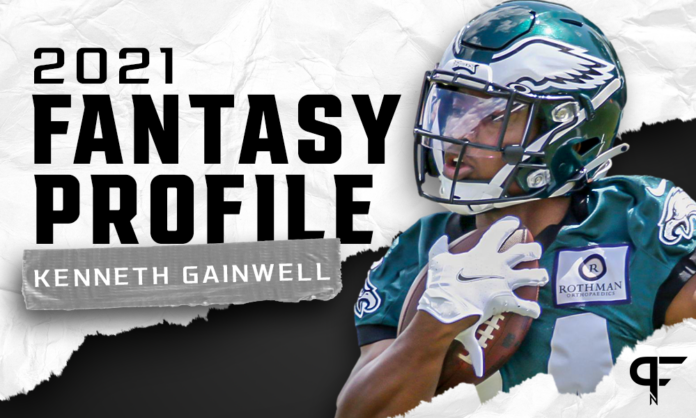 A potential rookie sleeper at RB, what is the fantasy outlook for Kenneth Gainwell, and should managers consider him at his current ADP?

A surprise faller during the 2021 NFL Draft, the Philadelphia Eagles might have found themselves a late-round gem in RB Kenneth Gainwell, who enters 2021 with a positive fantasy outlook compared to many with similar draft capital. Likely to factor into the Eagles’ committee approach at running back, what are the expectations for Gainwell, and should fantasy football managers target him in drafts at his current ADP?

It was well documented that the 2021 NFL Draft class was lacking at RB depth. However, with Najee Harris, Travis Etienne, and Javonte Williams, there was a handful of top-end talent. The name many seemed to leave off this list was Memphis product Kenneth Gainwell. And in my opinion, that is a mistake.

For my money, Gainwell is the best pass-catching back in this class and acts like a slot wide receiver out of the backfield. Hell, he even runs routes like one. How many other RBs do you see lined up in the “Z” and asked to run a comeback or back shoulder? We didn’t even see D’Andre Swift get those kinds of looks, and he was/is highly touted for his receiving ability.

After redshirting his first year on campus, Gainwell broke out in 2019. He started in all 14 games for the AAC champion Memphis Tigers and led all FBS freshmen with 2,069 all-purpose yards. He rushed 231 times for 1,459 yards and 13 touchdowns.

Additionally, he showed his receiving prowess by hauling in 51 receptions for 610 yards and 3 more touchdowns. Gainwell’s arguably most impressive performance came against Tulane, where he had a 200-yard receiving and 100-yard rushing game.

Like many others in the 2021 class, Gainwell faced a difficult decision last year. Given the pandemic and tumultuous NCAA season, he opted out of the season and focused on the draft.

There were talks leading into the draft that some NFL teams were leery of drafting players who chose to opt-out, virtually labeling them persona non grata in early rounds. This is the best reason you can come up with why Gainwell fell to the Eagles at pick No. 150 in Round 5 because it certainly was not based on talent.

Gainwell fills a critical role for the Eagles’ backfield

It’s well documented the Eagles are a team that relies on a committee approach at running back. That will not change under Nick Sirianni. For as talented as Miles Sanders is, he will always be hampered by their philosophy. Along with Gainwell and Sanders, the Eagles feature a deep RB room with Boston Scott, Jordan Howard, Jason Huntley, and Elijah Holyfield. Until recently, Kerryon Johnson was a part of this unit before being released by the team.

With a 17-game schedule on the horizon, the Eagles will likely keep four RBs on the 53-man roster, with two heading to the practice squad. The way it stands right now — Sanders, Gainwell, Scott, and Howard will make the team with Huntley and Holyfield serving as depth.

Scott will likely flank Sanders as the primary back with Howard in short-yardage situations. But I believe we see Gainwell challenge Scott before too long.

Gainwell will see touches early on as a rookie because he fills a critical role as a pass catcher. Sanders’ struggles out of the backfield were well documented last year. While seeing 52 targets, Sanders had a 13.5% drop rate — the second-highest percentage, according to Pro Football Reference.

In what should be a dynamic offense with Jalen Hurts under center, maintaining a receiving threat out of the backfield is critical. Gainwell could end up with standalone value come mid-season in PPR formats but is an injury away to Sanders or Scott from having flex consideration in all formats.

The issue with a committee approach is that everyone ends up with a smaller piece of the pie, even if you run the ball like the Ravens. And, in turn, a lowered overall potential.

While that holds true here for Philadelphia, there should be more opportunities to go around than many might realize. With Sirianni calling the plays for the Colts, they averaged 24.8 carries, 110 rushing yards, 7.3 targets, and 42 receiving yards per game as a group.

While Hurts will cut into these totals, it shows there is enough volume to at least have weekly optimism for whoever the RB2 is in a given week between Scott and Gainwell.

In his projection, the targets are the critical point for Gainwell’s fantasy outlook. Look at what Sirianni did with Nyheim Hines in terms of targets. That is the kind of role Gainwell could find himself in 2021. Since 2018, Sirianni and Steichen-coached teams have averaged a 30.4% target share for running backs.

Based on current projections, Gainwell is slated for 85-90 carries, 380-400 yards with 3 touchdowns. He could also add 34 receptions for approximately 300 yards and another score.

According to Sleeper, Gainwell is currently the RB45 with an ADP of 140.3 in half PPR formats. In superflex formats, where QBs see a boost in value, he falls to 161.5. Similarly, in the high-stakes NFC format, Gainwell is the RB50 but with an ADP of 152.4. However, on Fleaflicker, he is going as the RB59 at an ADP of 201.

Should you draft Gainwell in 2021 for fantasy?

Gainwell is one of my favorite deeper sleepers at running back, but I don’t think it happens quickly. It’s more likely that Gainwell will see his reps raise as the season goes along. It makes sense to give the rookie time to get a feel for the game, and also, the Eagles will be looking at touch counts and closely monitoring them.

Gainwell will likely have firmly taken command of the RB2 role and split reps with Sanders by mid-season. Although he will never supplant him, Gainwell would be one injury away from RB2 consideration. Remember Sanders missed four games last season due to various injuries.

Gainwell is a stash and hold for me in fantasy football leagues. I believe his value and workload will increase as the season goes on.